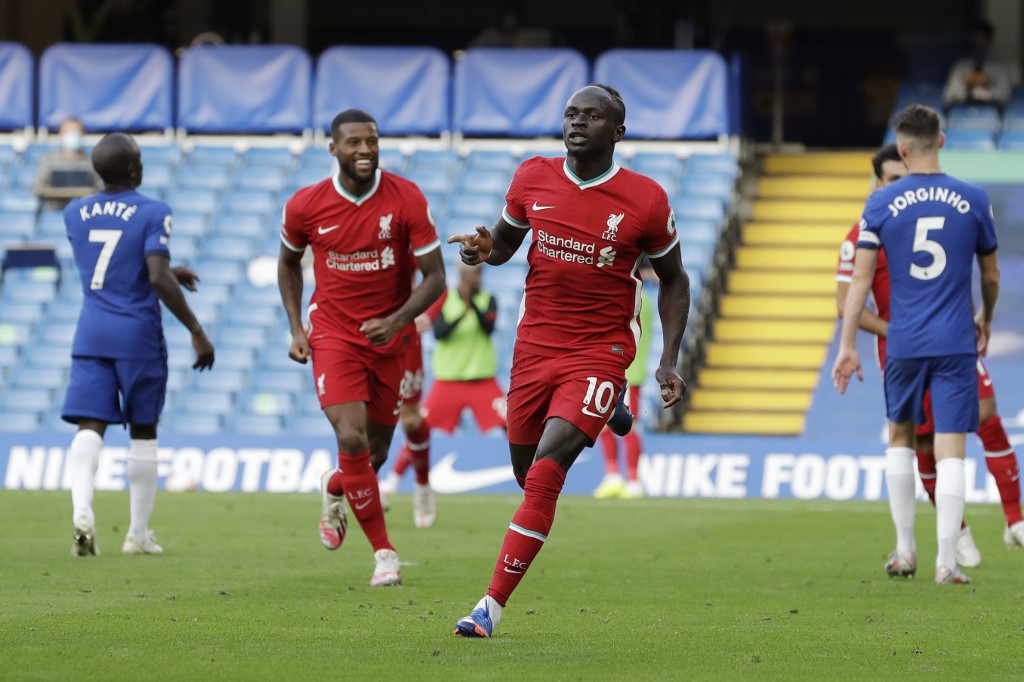 Liverpool's Senegalese striker Sadio Mane celebrates after scoring their second goal during the English Premier League football match between Chelsea and Liverpool at Stamford Bridge in London on September 20, 2020.

Mane was involved in the turning point at Stamford Bridge as the first clash between Premier League title contenders this season swung Liverpool's way.

In first half stoppage-time, Jordan Henderson picked out Mane's run behind Christensen and the Denmark defender responded by rugby-tackling the Senegal star to the ground.

Referee Paul Tierney initially booked Christensen, but VAR told him to consult the pitchside monitor and he changed his decision to a red card.

Mane grabbed his first goal of the season in the 50th minute as he met Roberto Firmino's cross with a thumping header after eluding Reece James' slack marking.

Mane was gifted his second goal as Chelsea keeper Kepa Arrizabalaga made a hash of trying to play out from the back, allowing the Liverpool forward to intercept and slot into the empty net.

It was the latest costly blunder from Kepa, who was dropped twice by Chelsea manager Frank Lampard last season despite his status as the world's most expensive keeper.

Lampard will be relieved that Chelsea are reportedly close to signing Rennes' Senegal international Edouard Mendy as he looks to replace Kepa.

Thiago Alcantara made his Liverpool debut at half-time after his move from Bayern Munich, but the Spain midfielder conceded a 74th minute penalty with a foul on Timo Werner.

After their chaotic 4-3 win over Leeds on the opening weekend, this was a return to the kind of dominant display Liverpool produced so often en route to their first English title for 30 years last season.

While Chelsea have spent £200 million ($258 million) on new signings in a bid to close the gap on the champions, Liverpool remain streets ahead of the Blues at present.