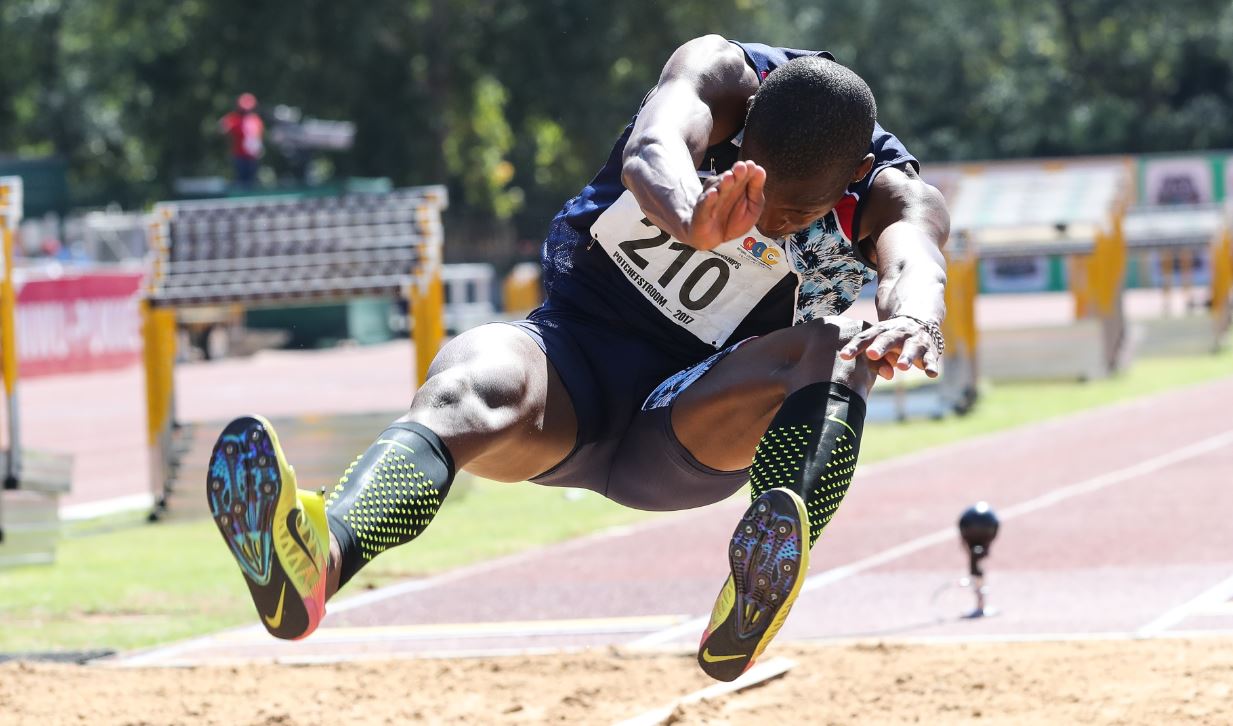 Luvo Manyonga flies through the air to a new South African and African record of 8.65m in the mens long jump during day 2 of the 2017 ASA Championships at Puk McArthur Stadium, Potchefstroom.

JOHANNESBURG - World long jump champion, Luvo Manyonga, has his sights set on the world record for quite a while now and just maybe it might happen in France on Wednesday.

It is certainly going to be a unique world record attempt. If the Tuks/HPC-athlete or any of the other six athletes competing succeed in doing, so there is bound to be some controversy because they are competing at 3 032m above sea-level on a specially built long jump track.

Most of the world record attempts happened at sea level.

Mike Powell who jumped 8.95m in 1991 at the Tokyo World Championships holds the current world record.

It is interesting to note that when Bob Beamon (USA) set his world record of 8.90m at the 1968 Olympic Games in Mexico City, he competed at 2 250m. At the time it was argued that Beamon had an unfair advantaged competing at such a high altitude.

Earlier this season Manyonga set his South African record of 8.65m in Potchefstroom which is only 1 341m above sea level.

It will be a definite challenge for Manyonga and the athletes to compete at 3 032m.  The problem with competing at high altitude is that there is less oxygen which means an athlete’s respiratory rate and heart rate speed up.

Neil Cornelius (Tuks/HPC coach) made it clear that it is not going to be a case of fools rushing in where angels fear to tread.

“We have planned for the world record attempt. Karen Gibbs (physiotherapist) has been helping Luvo with special breathing exercises to prepare him from competing at 3 000m. We also made provision for special thermal clothing should it be really cold in the mountains.”

Cornelius admits that many an athlete has in the past failed when officially going for a world record.

“Although all of this has especially been organised to help the athletes set a world record Luvo is not obsessed with jumping a specific distance. Obviously, we want Luvo to do that really big jump. I honestly believe his capable of doing something remarkable.

“But nothing is going to change. Our approach will be the same as at the World Championships in London.  Luvo’s goal will be to make sure that his first jump counts because we believe that with a good first attempt you ‘buy’ five more jumps.

“It is important that Luvo should have fun because of the more relaxed he is, the better he performs.

“Competing at such a high altitude certainly creates its unique challenges. For example, I know that Luvo is going to be much faster in his approach than normally so we will have to make certain adaptions to it to compromise for the extra speed.”

As to whether the IAAF will recognise a world record set at such a high altitude Cornelius said he foresees no problems.

“All of this is legal. What might happen is that the statisticians will put an ‘A’ in brackets behind whatever distance is jumped to indicate it happened at altitude. Personally, I don’t view this as any different than Luvo jumping at Tuks which is also at altitude.”

According to Cornelius, the organisers have set three days aside for this world record attempt. If the weather is not perfect on Wednesday, the athletes might only compete on Thursday or Friday. But all indications are that on Wednesday the conditions will be as near perfect as it can be.