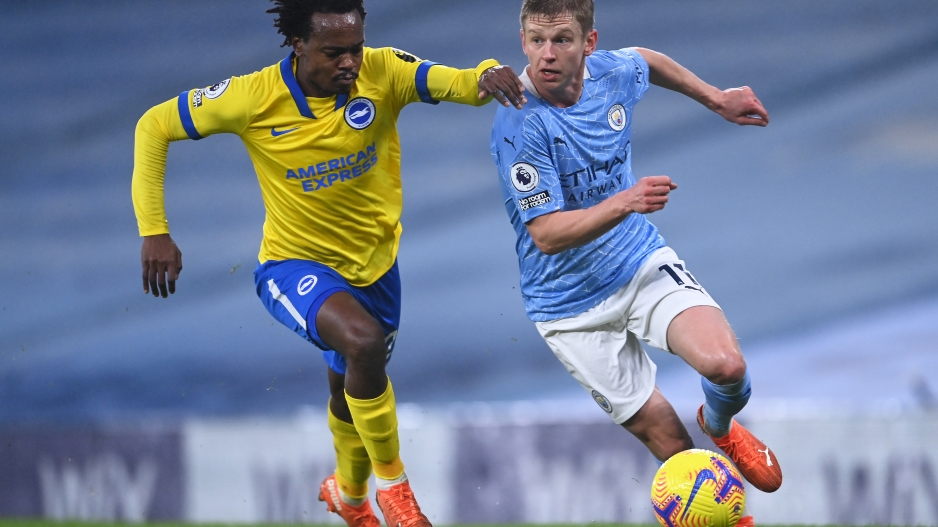 MANCHESTER - Phil Foden fired Manchester City into third place in the Premier League on Wednesday as Pep Guardiola's men saw off a feisty challenge from Brighton to win 1-0.

Much of the recent talk has been about a potential duel between leaders Manchester United and champions Liverpool but Pep Guardiola's men are now right in the mix.

The 2018 and 2019 champions started the season sluggishly but have hit the accelerator in recent weeks and are now just one point behind Liverpool with a game in hand.

City played without a recognised striker against Graham Potter's Brighton but despite not being at their fluent best in soggy Manchester, Foden's first-half goal proved enough.

"We knew how tough it would be," Guardiola told the BBC. "Brighton had a good mentality to play.

"We had a really good first half and had chances. After we missed a really clear chance in the second half they were better.

"We need to win these sort of games. It is a good lesson for us. Every game will be like this."

The home side had a golden chance to take an early lead when the impressive Kevin De Bruyne was put through by Ilkay Gundogan but goalkeeper Robert Sanchez blocked the Belgian's right-footed shot.

Brighton's Leandro Trossard had a chance to test the returning Ederson in the City goal but he bent his shot wide.

As City found their rhythm, Brighton defender Joel Veltman reacted well to clear and De Bruyne had another chance five minutes from half-time after a swift break but his powerful shot was well saved.

City's pressure finally told in the 44th minute. Foden received the ball from De Bruyne on the left of the attack.

The 20-year-old wriggled past two Brighton defenders and stroked the ball inside the near post from the edge of the box with his right foot.

It was the England international's eighth goal of the season -- he is City's top-scorer in all competitions.

Riyad Mahrez could have doubled City's lead shortly before the hour mark but sent his left-footed shot wide after being put through.

Moments later City again went close again. Gundogan forced a good save from Sanchez and the rebound fell to Bernardo Silva, who turned and thumped a shot against the woodwork.

Brighton's goal was leading a charmed life and Sanchez denied Joao Cancelo and De Bruyne as the home side kept probing.

But City lacked the control they had in the first period and never looked entirely comfortable with such a narrow lead.

Brighton engineered some promising situations but failed to properly test Ederson -- they had just one shot on target in the whole match.

De Bruyne won a late penalty after Sanchez brought him down but substitute Raheem Sterling blazed his spot-kick over the bar.

City are now unbeaten in their past 14 games in all competitions and have won seven in a row.

Guardiola's team have largely brushed off the absences of a number of players as a result of various coronavirus issues.

Sergio Aguero missed out again as he continues his period in self-isolation after being identified as a close contact of someone who tested positive for Covid-19.

But Ederson was back in goal following a spell on the sidelines after testing positive and Gabriel Jesus, who also contracted the virus, appeared as a second-half substitute.

Tottenham can leapfrog City into third place on goal difference if they beat Fulham in the late kick-off on Wednesday.