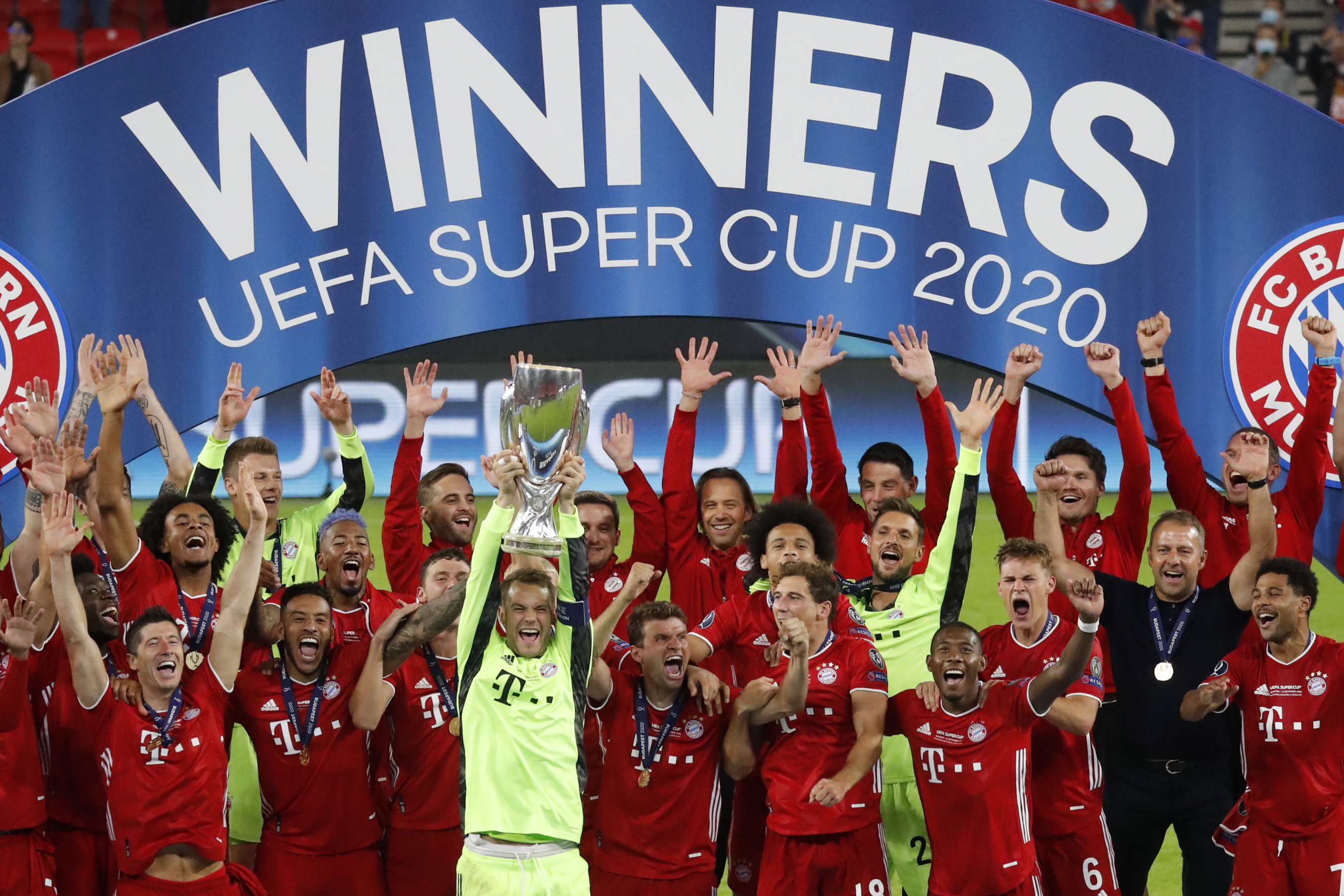 File: Bayern Munich's German goalkeeper Manuel Neuer and his teammates celebrate with the trophy after the UEFA Super Cup football match between FC Bayern Munich and Sevilla FC at the Puskas Arena in Budapest, Hungary on September 24, 2020.

BUDAPEST - Veteran midfielder Javi Martinez admitted it was "a dream" to be able to write more UEFA Super Cup history for Bayern Munich on Thursday as his header in extra time sealed a 2-1 win over Sevilla in Budapest.

Having equalised with a crucial 120th-minute goal seven years ago when Bayern won the 2013 Super Cup on penalties against Chelsea in Prague, Martinez struck on 104 minutes at the Puskas Arena to hand the Champions League winners a fourth title in 2020.

There were a smattering of travelling Bayern and Sevilla fans among the 15,180 crowd in Budapest as both clubs played for the first time in front of spectators since the Covid-19 pandemic first hit Europe in March.

After Lucas Ocampos converted an early penalty for Sevilla, Leon Goretzka equalised for Bayern, who had two second-half goals disallowed before substitute Martinez, 32, struck from a late corner.

Bayern head coach Hansi Flick praised his team for "pulling through with their mentality. In the end, my players went through the pain barrier to win."

Having replaced Goretzka on 99 minutes, it was Martinez - linked to a return to Spain after losing his first-team place - whose header extends Bayern's winning streak to 23 games dating back to February.

"Whenever I wear the Bayern shirt, I always try to give my best and I showed that once again today," Martinez told Sky.

"I always want to help the team by scoring a goal. It's a dream come true.

"I'm really happy to win this trophy for a second time after also scoring in 2013."

After also sweeping the Bundesliga, German Cup and Champions League trophies, Bayern can win a fifth title this year when they host Borussia Dortmund in Munich for the German Super Cup on Wednesday.

"We saw tonight how important Neuer is for them," said Rakitic.

"We had two great chances to go ahead, but he stopped them.

"Then we gave away a silly corner and they scored. Nevertheless, we can be proud of how we played against the best team in Europe."

Champions League winners Bayern fell behind for the first time this season on 14 minutes when the VAR judged David Alaba had fouled Rakitic in the area and Ocampos converted Sevilla's penalty.

Alaba was booked for the challenge and there were nervous glances in the Germans' ranks, especially when defender Benjamin Pavard and Thomas Mueller both missed chances.

Goretzka got Bayern back on level terms when Mueller and Robert Lewandowski combined in the area for the midfielder to smash home the equaliser with 34 minutes gone.

It stayed 1-1 at the break, but Bayern turned up the heat on the Europa League holders.

Just six minutes after the break, Lewandowski had the ball in the net after being set up by Thomas Mueller, but the VAR spotted the Poland striker was offside.

With an hour gone, Bayern winger Leroy Sane was left frustrated after his shot powered past Sevilla's Moroccan goalkeeper Bono, but the VAR spotted Lewandowski had fouled a Sevilla defender in the build up.

With 90 minutes almost up, Manuel Neuer underlined his status as one of the world's best goalkeepers with a finger-tip save to deny En-Nesyri after Sevilla attacked from the edge of their own penalty area.

Sevilla made a great start to extra-time with Bayern in all sorts of trouble, as Ocampos had a shot blocked while En-Nesyri's shot clipped the post after crashing off Neuer's leg.

However, the scene was set for Martinez, a veteran of the side which won the 2013 Champions League final in London, to add to his chapter in Bayern's folklore.

"I was so happy when the coach brought Javi on, because I know how good he is with his head from set pieces," said Bayern captain Neuer.

"Sevilla are a well-drilled team, it's not easy to play against them, but overall we deserved the win and can be proud of ourselves."