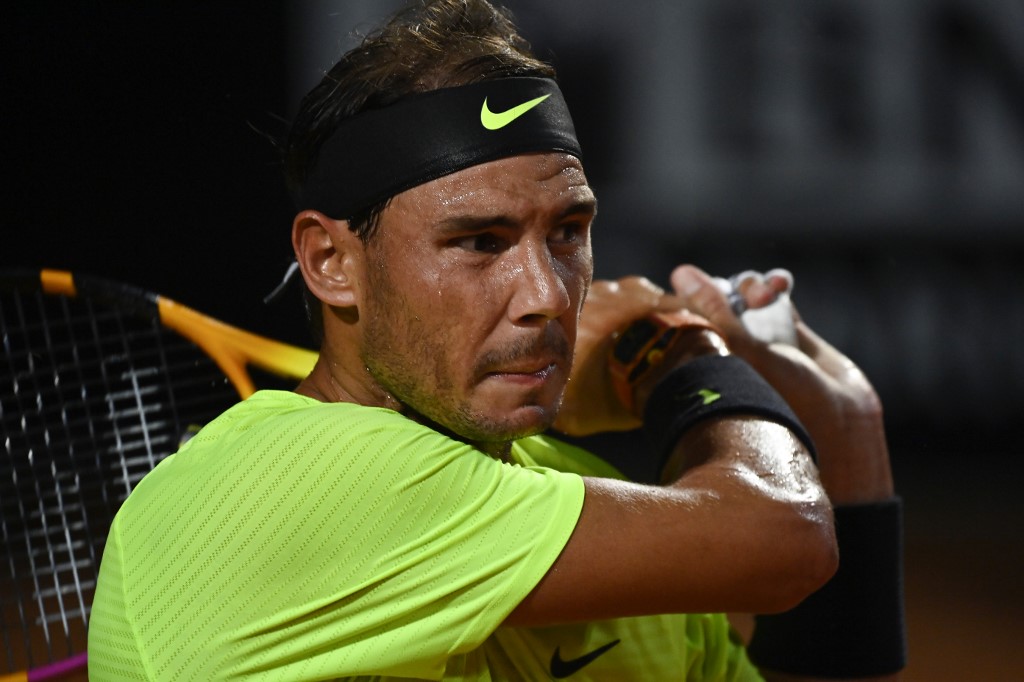 FILE: Spain's Rafael Nadal looks on during his quarter final match of the Men's Italian Open against Argentina's Diego Schwartzman at Foro Italico on September 19, 2020 in Rome, Italy.

PARIS - The undisputed king of clay, Rafael Nadal is one title away from matching Roger Federer's all-time Grand Slam record, but 15 years on from the Spaniard's first French Open triumph he appears more vulnerable than ever at his beloved Roland Garros.

Nadal owns an astounding 93-2 record in Paris dating back to his debut in 2005, when, still a teenager, he became the first player to win the French Open on his first attempt since Mats Wilander in 1982.

Fast-forward to the present day, and his 19 Grand Slam crowns - a record 12 of which have come at Roland Garros - coupled with Federer's absence after knee surgery leave him on the brink of history at a venue where he has won each of the past three years.

Yet a multitude of factors, mostly beyond his control, have conspired against Nadal and offered hope to his chief rivals - namely Novak Djokovic and recent US Open winner Dominic Thiem.

Boris Becker, a former coach of world number one Djokovic, suggested the rescheduled tournament - pushed back from its traditional spring billing due to the coronavirus pandemic - will be tougher than usual for Nadal.

The heavier conditions could suit hardcourt players more and negate some of Nadal's lethal topspin, possibly aiding Thiem who has finished runner-up in Paris twice in succession.

"This year is going to be particularly hard for Rafael Nadal. He's my number one favourite but the difference between him and the other players is less big this year than usual," said Becker, a six-time Grand Slam champion.

"He's not in his regular rhythm. He needs match practice. Normally, he was coming to Roland Garros having often played four big clay tournaments, which he had generally won."

Nadal will head into the French Open without a clay title under his belt for the first time, having lost in straight sets to Diego Schwartzman in the quarter-finals at Rome -- his first tournament in six months.

"It's not a moment for excuses. I've spent a long time without competing, I played two good matches," Nadal, who skipped the US Open citing Covid-19 concerns, said following the defeat.

"It's a completely special and unpredictable year," he added.

"I did my job here. I did a couple things well and other things bad. At least I played three matches."

Despite the sense this is the most understrength version of Nadal at the French Open in recent times, Djokovic remains adamant the 34-year-old is again the favourite to lift the Coupe des Mousquetaires.

"The record that he has there, the history of his results, you just can't put anybody in front of him," said Djokovic, himself vying to add to his lone 2016 triumph at Roland Garros.

"But, you know, definitely Diego showed that Nadal is beatable on clay," added the Serb.

"The conditions that they played on, obviously heavy clay, not much bounce, humid, night sessions, we are going to have that as well in Paris. I'm pretty sure that he does not prefer that to a high bounce. I know he likes the high bounce.

"He likes the hot and warm and fast conditions, where he can use his spin a lot. Even though he's the favourite, I think there are players that can win against him there."

Another championship run for Nadal, not accounting for potential walkovers, would take him to a century of wins at the French Open. Only Federer, Serena Williams, Martina Navratilova and Chris Evert have hit triple digits in wins at a single major in the Open era.

Schwartzman agreed that Nadal was still the favourite.

"Rafa is the king. It's his house. He went to Roland Garros many years playing good, sometimes not playing his best and he won.

"I think Rafa is always there, the guy who is going to win."