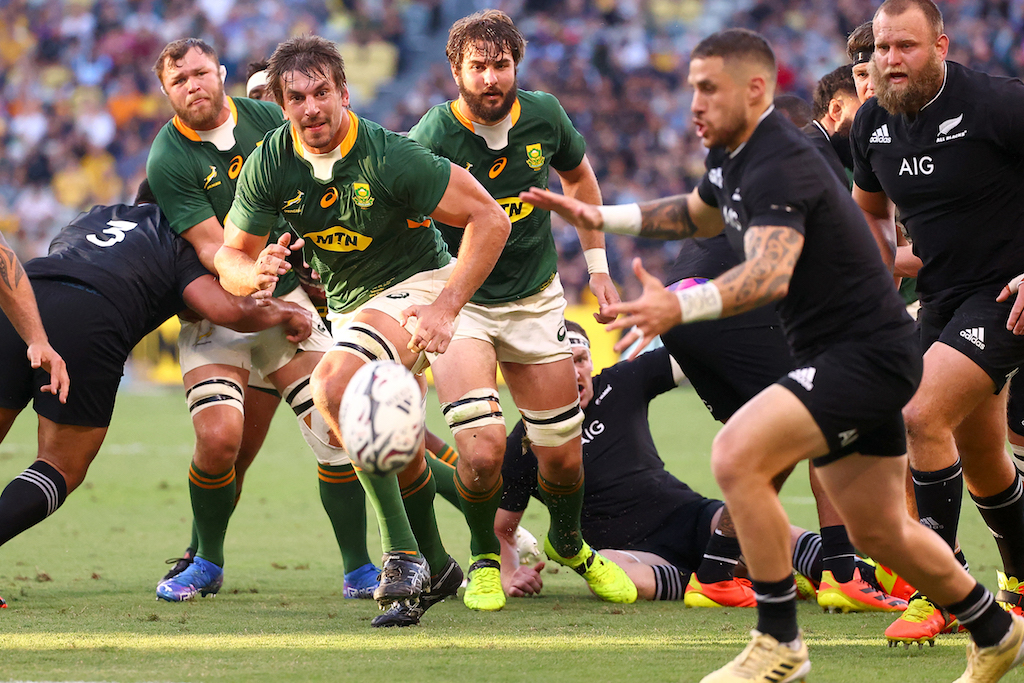 TOWNSVILLE - A late Jordie Barrett penalty saw New Zealand clinch the Rugby Championship with a tense 19-17 victory over South Africa in the historic 100th Test between the arch-enemies in Townsville on Saturday.

In a torrid affair with a high error count, the All Blacks led 13-11 at half-time and both sides traded penalties through the second half until Barrett landed the winner with two minutes remaining.

The showdown had been a long time in the making -- 100 years since two of the world's great rivals first faced off and two years since they clashed at the 2019 Rugby World Cup in Japan.

The world champion Springboks went into the game on the back of stinging criticism from coach Jacques Nienaber who demanded improvement from the "too many errors in every aspect" displayed in back-to-back losses to Australia.

They relied on the boot of Handre Pollard to have them in sight of victory with two minutes remaining, but then Barrett stepped up to seal the outcome.

In a see-saw first half, it was a try apiece within the opening five minutes, before the Springboks pulled ahead with two penalties, only for the All Blacks to land two of their own late in the half to regain the lead.

But as much as the All Blacks created opportunities, and punched holes through the Springboks defensive line, they suffered through poor finishing and ill-discipline.

Before a near-capacity crowd of 25,000 at the Queensland Country Bank Stadium, a Codie Taylor break paved the way for Will Jordan to score the opening try, with Jordie Barrett landing the conversion to have the All Blacks ahead 7 -0.

Almost immediately, the Springboks replied when George Bridge misjudged a high kick from Faf de Klerk and Sbu Nkosi snapped up the ball to score.

The normally reliable Pollard missed the conversion but banged over two penalties soon after to put the Springboks ahead 11-7.

While Bridge was having problems dealing with the high ball on the left wing, the Springboks inexplicably turned their attention to fullback Jordie Barrett, who remained unflappable under a succession of bombs and was willing to ignite a counterattack.

He also landed two penalties late in the half, the second when Nkosi was yellow-carded for a deliberate knockdown when the All Blacks were attacking the line.

At the start of the second half the All Blacks twice turned down close-range shots at goal in favour of a lineout drive and both times came up short. Instead, it was the Springboks who scored through a third Pollard penalty.

From there to the final whistle the All Blacks played attacking rugby without reward leaving Pollard and Barrett to trade penalties.

Of the 100 Tests between New Zealand and South Africa, the All Blacks have now won 60, South Africa 36 and four have been drawn.