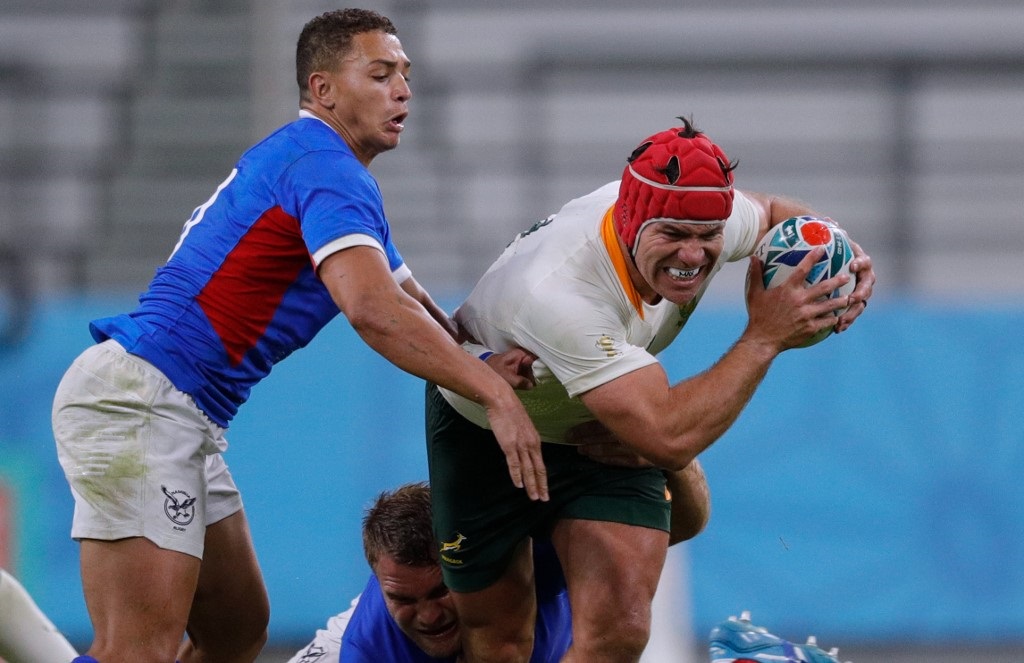 South Africa's number 8 Schalk Brits (R) is tackled by Namibia's fly-half Cliven Loubser (L) during the Japan 2019 Rugby World Cup Pool B match between South Africa and Namibia at the City of Toyota Stadium in Toyota City on September 28, 2019.

If you’re a fan of Namibia’s rugby team you may want to look away. If you’re a dreamer then take some of the 150/1 offered on their chances on getting one over New Zealand when the sides meet on Sunday.

This is an encounter where the analysis does not revolve around debating the merits of each team. It is simply trying to work out just how many points New Zealand might be able to rack up inside 80 minutes. They are, after all, offered at 1/1000 to get the job done.

The All Blacks ripped Canada apart, having waited 11 days between their first and second match, and they now run out for another easy encounter in Tokyo.

This will be the second Rugby World Cup in succession that these two teams meet and the last time they faced off the All Blacks ran in nine tries for a 58-14 win. At half time the score was 34-6.

It is matches like these where it may pay to take a chance on some of the side show bets. One of those being the first stoppage in play. There’s 14/10 available on a lineout which might be an option. Think about New Zealand kicking off and sending one into Namibia territory which would likely be hastily cleared.

Or how about some of the 6/1 for a try to be scored to cause the first stoppage. The thinking here that New Zealand may just bully the opposition if receiving the kick-off and run in an early try.

There is 5/2 available if you think that a penalty or free kick will be the first stoppage and the same price is offered on a scrum causing the first break in play.

For the numbers bettors there is 9/10 offered either way if you would like a bet on the total points haul at half time and you can take the same price if you think odds or evens with regards to the full time points tally.