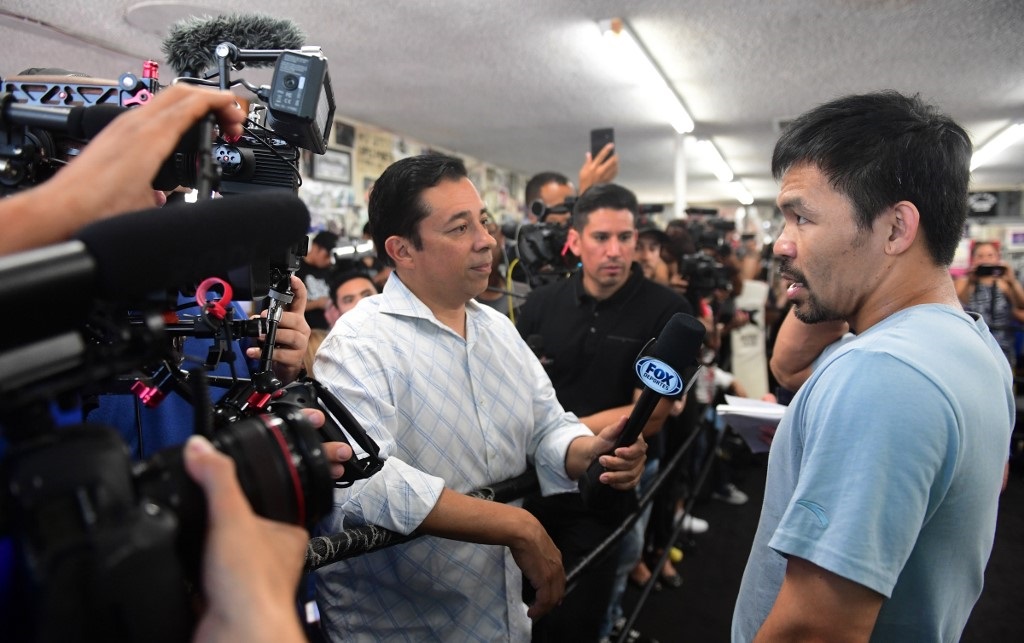 Eight-division world champion boxer Manny Pacquiao is interviewed ahead of a workout in Hollywood, California.

LONDON - Manny Pacquiao has not signed a contract to take on Amir Khan in Saudi Arabia later this year despite claims that a deal has been agreed for the bout, the Filipino's publicist has said.

Khan, who beat Australia's Billy Dib in Jeddah on July 13 to win the WBC international welterweight title, said on Tuesday that he had agreed a deal to fight Pacquiao in Riyadh on November 8.

The Briton told British media the clash with Pacquiao would happen even if the 40-year-old were to lose to American Keith Thurman in Las Vegas on Saturday.

"Manny has not signed any contract. As far as I know it has not even been discussed," Pacquiao's publicist Fred Sternberg told the BBC.

"He has been in training camp for the past eight weeks, four in the Philippines and four in the United States, and he hasn't met with Amir Khan during that time."

Sternberg said he did not know what prompted Khan to make the claims.

"That's a question you need to ask Amir Khan," he said.

READ: Pacquiao polls Twitter on who to fight next

Khan had been slated to fight eight-division world champion Pacquiao two years ago in the United Arab Emirates but no agreement could be reached.

Pacquiao, one of the sport's most decorated fighters, has a record of 61 victories, seven defeats and two draws in a career spanning 24 years.

Khan has 34 wins and five defeats.