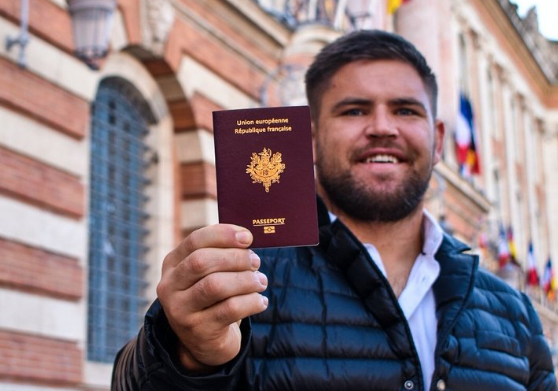 Maks van Dyk posted a photo of himself holding the document on Twitter with the popular slogan 'Vive la France et vive la Republique' written below.

TOULOUSE - South Africa-born prop Maks van Dyk, who cheekily asked President Emmanuel Macron for French citizenship at the pre-match presentation of the Top 14 rugby final in June, is now the proud holder of a French passport.

Van Dyk posted a photo of himself holding the document on Twitter with the popular slogan 'Vive la France et vive la Republique' written below.

Macron went down a line of players shaking hands before kick-off but was stopped by the player when it was his turn to meet the president.

"Can I have French nationality please? I would be proud to be French," Van Dyk asked Macron ahead of Toulouse's victory over Clermont at the Stade de France.

The under 20s world champion with South Africa in 2012, who was born in Johannesburg, joined French club Toulouse in 2016 and appeared on the list of French naturalised persons of the Official Journal of 8 September.

If he is to follow in the footsteps of the likes of Paul Willemse and Alivereti Raka by playing for Les Bleus after receiving a French passport he must wait an extra two years.

World Rugby, the sport's governing body, announced in May 2017 they would be extending their residency rule from three to five years wait, which will come into place in 2020 after the ongoing Rugby World Cup.