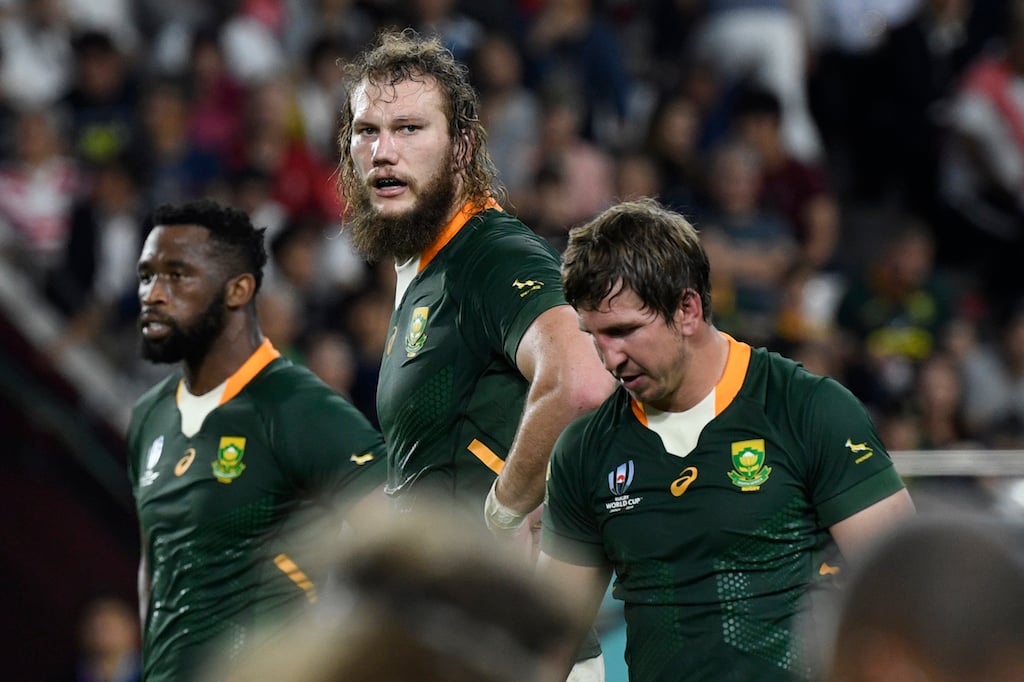 South Africa's lock RG Snyman (C) looks on during the Japan 2019 Rugby World Cup Pool B match between South Africa and Canada at the Kobe Misaki Stadium in Kobe on October 8, 2019.

AFP looks at the head-to-heads between the two nations:

Both marauding flankers are "Captain Marvels", talismanic figures who lead by example and should be wearing capes, such is the superhuman impact they have on their teams.

Kolisi and Leitch both had to win fitness battles to play at the World Cup after suffering serious injuries and it's impossible to overestimate the psychological boost the return of the blindside giants has had.

Kolisi, who became South Africa's first black captain last year, will be a calming influence for the Springboks this weekend as they look to avoid a repeat of 2015 when they were humiliated 34-32 by Japan in their opening game.

So cool is Kolisi, he even had time to visit the Japanese Grand Prix last weekend, where he presented Red Bull's Dutch driver Max Verstappen with a Springboks jersey.

South Africa will start as favourites after beating Japan 41-7 in a warm-up last month, but Leitch warned: "We're not going to lie down for them - we want to reach the semi-finals."

For neutrals, this weekend's meeting could be the pick of the quarter-finals in terms of explosive, high-tempo rugby, and both teams have pace to burn out wide.

Springboks pocket-rocket Cheslin Kolbe has the electric speed that had world champions New Zealand scrambling in their World Cup opener, which the All Blacks ended up winning 23-13.

Cousin of 400-metres Olympic gold medallist Wayde van Niekerk, Kolbe brings the X-factor for the Boks - precisely what Matsushima provides for Japan, scoring five tries as the Brave Blossoms defied 50-1 odds to win all four pool games and reach the last eight for the first time.

Matsushima's sidekick Kenki Fukuoka is no slouch either, as he proved in skinning Ireland's defenders in their 19-12 upset in Shizuoka.

Japan coach Jamie Joseph likens his finishers to "Ferraris" - but in Kolbe south Africa have a genuine match-winner of their own. Blink and you could miss it.

Pollard, blessed with a sublime kicking game, alternated fly-half duties with Elton Jantjies during the pool stages but he will marshal South Africa for the showdown with Japan.

He is up against a slightly unknown quantity in the shape of Tamura, who has been a revelation for the host side.

Cool as a cucumber, Tamura leads the World Cup with 48 points so far and has landed 10 penalties - also a tournament high - despite not always understanding the instructions English-speaking team-mates are barking at him.

Tamura's kicking has been spot-on and he never shirks a tackle. His calmness under pressure alongside Leitch and veterans such as Shota Horie and Luke Thompson will be crucial when Japan face a fired-up South Africa side with serious World Cup ambitions and hell-bent on exorcising the demons of the "Brighton Miracle".