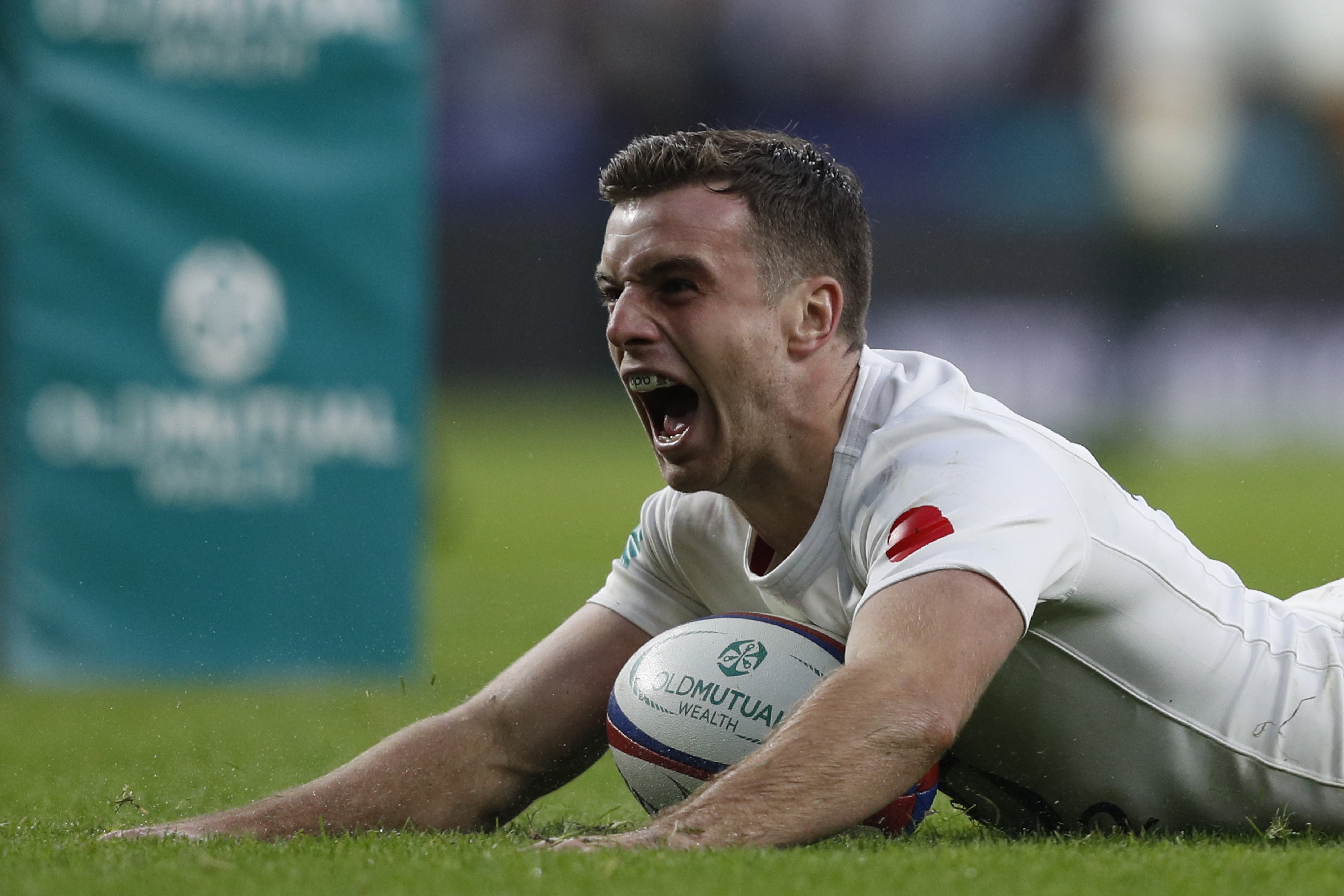 England's fly half George Ford celebrates after scoring a try during the rugby union test match between England and South Africa at Twickenham stadium in southwest London on November 12, 2016.

TWICKENHAM – England ended their 10-year wait for a victory over South Africa with a 37-21 win at a rainswept Twickenham on Saturday.

They outscored the Springboks four tries to two as they made it 10 wins in as many Tests under Australian coach Eddie Jones.

The teams' opening end of year international turned on an England burst either side of half-time that saw them score 23 unanswered points.

England found themselves 6-0 behind early on after Lambie slotted a penalty and kicked a scruffy drop-goal.

This was England's first Test since they completed a 3-0 series win in Australia in June and it showed at the start.

Nevertheless, it was England who scored the game's first try in the 10th minute.

Ford's chip over the top of the defence was well covered by le Roux but England had a close-range line-out.

Joe Launchbury, reviving his World Cup second row partnership with Lawes in the absence of the injured Maro Itoje and George Kruis, won clean possession off the top.

The ball was worked back to fullback Mike Brown, who sent in May at the left corner as the injury-hit wing marked his first Test in over a year with a well-taken try. Farrell converted and England led 7-6.

England, however, conceded six penalties in the first 20 minutes, the last an easy chance for Lambie straight in front of the posts that left South Africa 9-7 up.

Jerome Garces warned England captain Dylan Hartley about the team's discipline and the French referee's words appeared to have some effect.

South Africa suffered a setback in the 33rd minute when giant lock Eben Etzebeth went off after a nasty clash of heads with England No 8 Billy Vunipola.

Etzebeth's absence coincided with England scoring 13 points in seven minutes before the break.

South Africa prop Vincent Kock collapsed a scrum in front of the posts to give Farrell an easy penalty and, in the 36th minute, England had their second try.

Elliot Daly's kick behind the defence was hacked on by Brown, who failed to regather cleanly, and Lawes in his 50th Test, had a first England try when he slid over on the follow-up.

Garces decided Brown had not knocked on and Farrell converted.

Then, with the last kick of the half, outside centre Daly -- making his first Test start -- lived up to his reputation as a long-range kick specialist by landing a 51 metre penalty and England turned round 20-9 in front.

That became 27-9 just three minutes into the second half when scrum-half Ben Youngs's dummy off the back of a ruck caught the Springbok defence cold before his inside pass sent in Ford for a try that Farrell duly converted.

Inside centre Farrell's fifth successful goal-kick from as many attempts then stretched England's lead to a comfortable 21 points.

Goosen went over for a try, despite the suspicion of a forward pass.

But this was a brief interruption to England's dominance.

From a scrum on South Africa's 22, another Youngs dummy, 'bought' by Pieter-Steph du Toit, saw him go clear before sending in half-back partner Farrell for an unopposed try.

Le Roux rounded off the try-scoring but his effort could not deny England their first win over the Springboks since 2006.