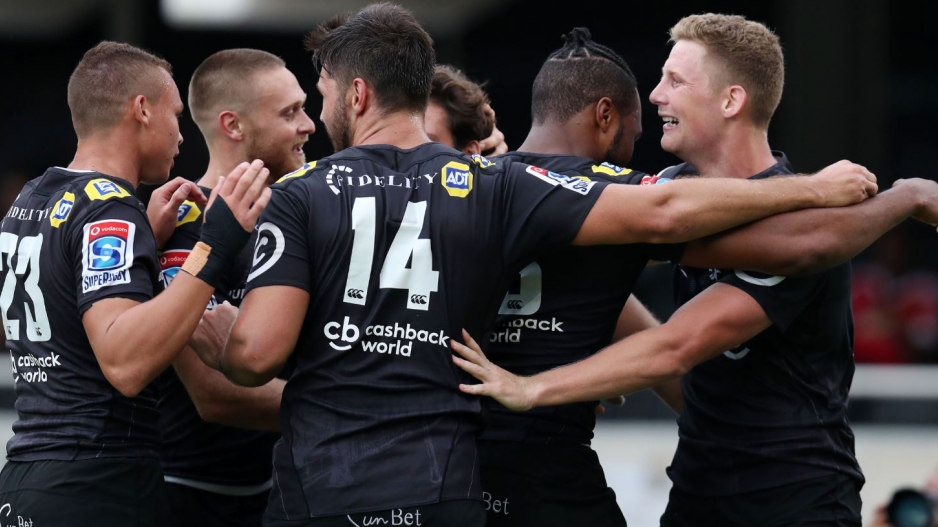 File: Robert du Preez of the Sharks celebrates with teammates during the 2018 Super Rugby match between Sharks and NSW Waratahs at GrowthPoint Kings Park, Durban.

DURBAN - There will be an interesting sub-plot to Saturday’s clash between the Sharks and Stormers when all three Du Preez brothers start for the same Super Rugby side for the first time.

All three brothers, Rob Jnr, Jean-Luc and Dan (the latter two are twins), went to school at Kearsney College in Durban and represented the Sharks at youth tournaments and at Under-19 level.

The young trio all appeared set to make it big for the Sharks at senior level, but in 2014, Rob Jnr made the move to Stellenbosch to play for Maties on loan in the Varsity Cup.

Having been named the “Player that Rocks” for the tournament, Rob Jnr understandably drew the attention of Western Province and the Stormers, with the young flyhalf ultimately opting to sign a contract that saw him remain in Cape Town.

It was an understandable move when one considers that Pat Lambie was firmly entrenched as the first-choice flyhalf for the Sharks at the time, with Rob Jnr seeing an opportunity to enjoy more game time in Western Province and Stormers colours.

As Rob began to work his way through the WP ranks, the Du Preez twins quickly emerged as particularly hot property at the Sharks, while quickly establishing them as first-choice players in the Durban-based team&39;s loose trio.

At the end of last year, all three were involved in the same match when the Sharks hosted Western Province in the Currie Cup final, but again it was a case of Jean-Luc and Dan coming up against Rob in opposing colours.

As fate would have it, Rob Jnr produced a starring performance as he guided Province to a surprise victory, but it would also be his final match for WP after deciding to make the move to the Sharks ahead of the 2018 season.

Not only did this see Rob Jnr reunited with his brothers, but it also saw him come under the guidance of his father, Robert Senior, who took over the coaching top job at the Sharks in 2016.

The Sharks coach has had little hesitation in backing his son to start in the Sharks’ No 10 jersey throughout this season’s Super Rugby campaign to date, but injuries to Jean-Luc and Dan meant all three brothers have yet to start together in the same game.

That will change this Saturday after Dan du Preez was named to start in the No 8 jersey for the first time this year, while Jean-Luc will pack down at blindside flank, with Rob Jnr slotting into his customary position at flyhalf.

The last time all three brothers played with each other came at the 2014 Junior World Championships, but they are now set to make another little piece of history on Saturday, all under the watchful eye of their father who will be viewing proceedings from the coach’s box.