Steelers tip All Blacks great Carter to be big in Japan 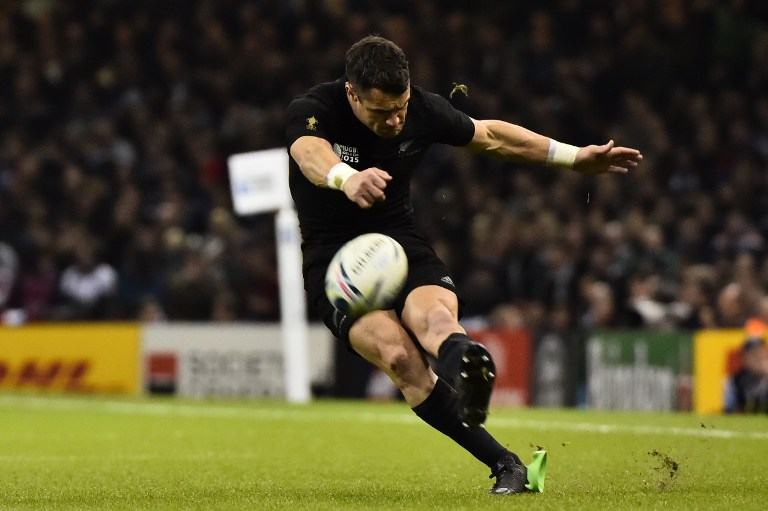 New Zealand's fly half Dan Carter kicks the ball during a quarter final match of the 2015 Rugby World Cup between New Zealand and France at the Millennium Stadium in Cardiff, south Wales, on October 17, 2015.

The 35-year-old double World Cup winner will leave French Top 14 side Racing 92 at the end of the season and Kobe officials already have high hopes, despite Carter&39;s recent injury woes.

Excited to announce I’ll be joining Kobe Steel Kobelco Steelers rugby team in Japan for next season. These decisions are never easy but I must thank @racing92 for their support pic.twitter.com/TWrAUt6K2U

"He has told us he is confident of recovering fully and being able to play," Steelers team director Masayuki Fukumoto told AFP.

"We expect his mental strength and professionalism will rub off on the team. The Japanese players will learn a lot just from watching his intensity in training.

"He&39;s a world-class player and we think his performances will also give his team mates a lift," added Fukumoto.

"But we also expect him to be a leader off the pitch. He&39;s a decent human being and his positive attitude can only help the team. We are sure he will be an example to the other players."

Here is part of the interview I did yesterday around my decision to play in Japan next season. Full interview here https://t.co/rLVxGtZscm pic.twitter.com/uKqbJ3oIcA

The Steelers, based in the port city of Kobe in western Japan, denied reports Carter had been offered a two-year deal and refused to disclose contract details.

However, Fukumoto expects Carter to boost rugby&39;s profile in Japan before the country hosts the 2019 World Cup.

"Obviously we would like Carter to play for us for as long as possible," he said. "But while he is here hopefully we will see bigger crowds turn out and that can only have a positive influence before the World Cup."

Carter, who played 112 times for New Zealand and is the highest points scorer in Test match history, is widely considered the greatest fly-half in rugby history.

But he has struggled with a variety of injuries in recent months and played only four times this season.

Carter, a three-time rugby world player of the year, told French media at the weekend that he wanted to be closer to his native country.

He joined Racing in 2015, winning the prestigious Top 14 in his first season.

But the global icon was implicated in a cortisone use scandal dating from tests taken at the 2016 Top 14 final before eventually being cleared of any wrongdoing.

In February, Carter&39;s image suffered a further dent when he tested two-times over the legal alcohol driving limit in Paris and was dropped by his sponsor Land Rover.