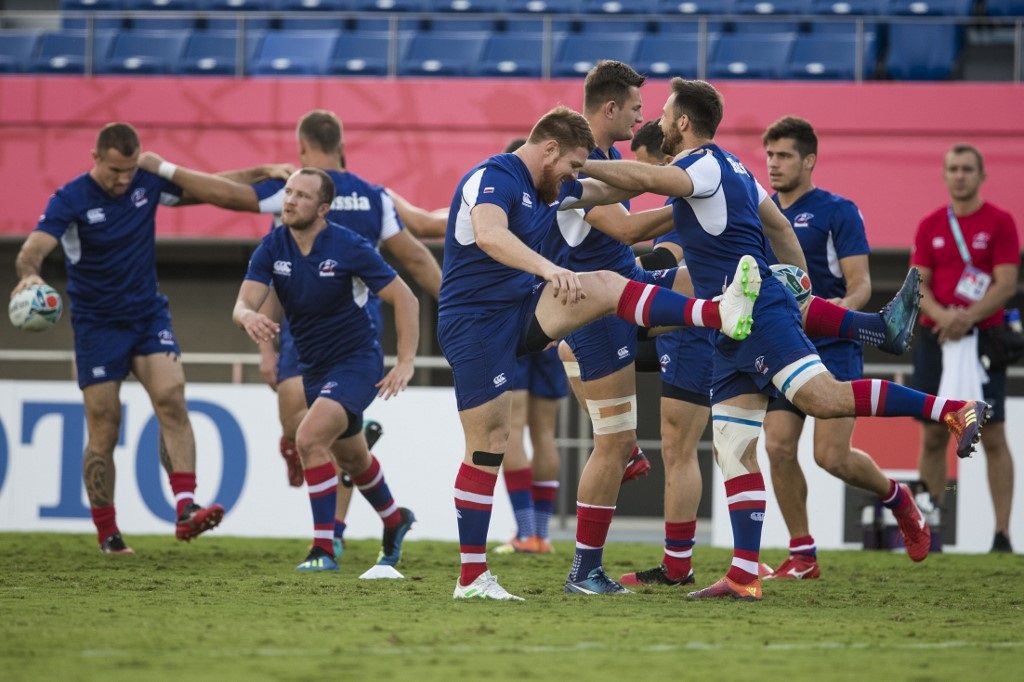 Russia's players warm up during the captain's run training session at the Kumagaya Rugby Stadium in Kumagaya on September 23, 2019, on the eve of their Japan 2019 Rugby World Cup Pool A match against Samoa.

It’s a relatively quick turnaround for Russia in the Rugby World Cup as they line up against Samoa in a Pool A encounter. It’s a game that sees Russia look to bounce back after losing on Friday while Samoa get their tournament under way.

And for Samoa, they need to ensure that they get off to a winning start if they are to give themselves a chance of sneaking through, taking advantage of Scotland’s poor show in their opener on the weekend.

As it stands, Ireland and Japan occupy first and second in Pool A while Scotland are rooted to the bottom of the log due to their negative points difference. The men from the Southern Hemisphere are heavy favourites at 1/33 while the Russians are 18/1 in the Full Time Result market.

There’s no history between these two sides to compare but Samoa are ranked in 16th and Russia are 20th in the world rankings. Samoa have also faced tougher opposition this year and while they have only managed to beat Tonga this year they have run other sides close and managed to run in two tries against Australia in their most recent outing.

Russia on the other hand are staring at the prospect of a third straight loss having been comprehensively outplayed against the hosts in the opener last Friday.

If Samoa are set to run riot, then it may be worth looking at the Anytime Tryscorer market and wing Ed Fidow is at 9/20 to score a try while Ahsee Tuala and Alapatis Leiua are at 11/20 and 8/10 respectively. Fullback Tim Nanai-Williams is also at 8/10.

You can get 11/2 on Ed Fidow to score the first try and 6/1 on Ahsee Tuala. Alapati Leiua and Tim Nanai-Williams are both 8/1 to be the first tryscorer. Henry Taefu is at 10/1.

You can take 9/10 either way on the Total Points Odd/Even for the encounter.

This looks like another tough one for Russia to overcome before they get to enjoy a bit of a break.