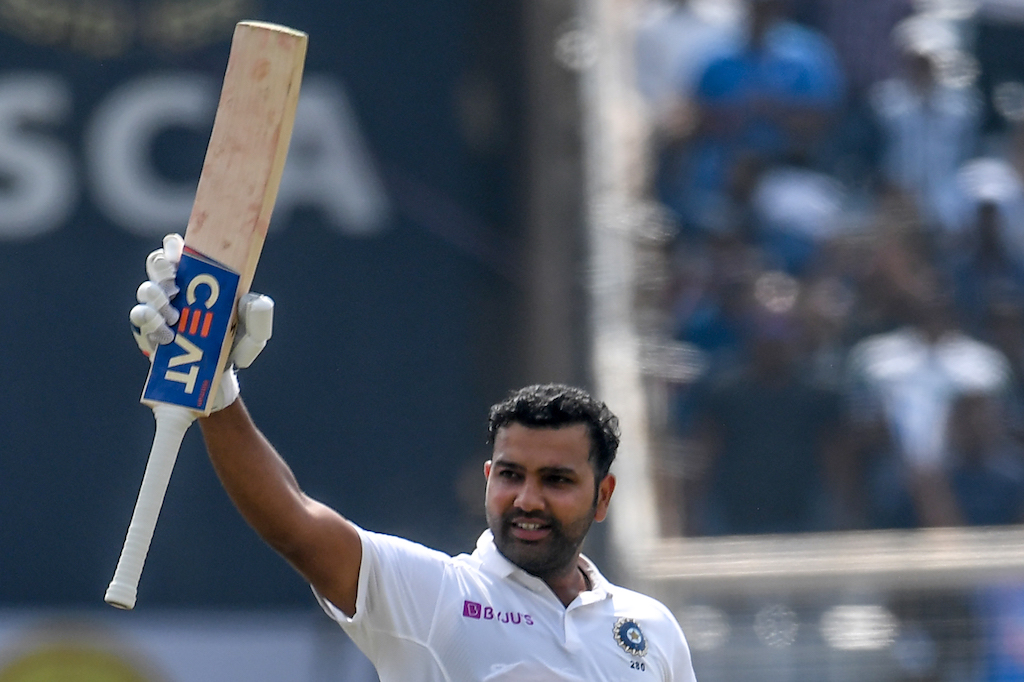 India's Rohit Sharma celebrates his double century (200 runs) during the second day of the third and final Test match between India and South Africa at the Jharkhand State Cricket Association (JSCA) stadium in Ranchi on October 20, 2019.

INDIA - Rohit Sharma struck his maiden double century in Test cricket to put India on course for a big total against South Africa on day two of the third match on Sunday.

The in-form opener reached the milestone with a six off paceman Lungi Ngidi in the third over after lunch to a standing ovation from the raucous home crowd in Ranchi.

He hit another six off Ngidi before falling to paceman Kagiso Rabada for 212 and returned to the pavilion with handshakes from the South African side.

India were 375 for five in 90 overs with Ravindra Jadeja on 15 and Wriddhiman Saha on five at the crease.

Sharma, who hit twin centuries in his debut as Test opener at the start of the series, pulled India out of early trouble with his 267-run fourth wicket stand with Ajinkya Rahane, who made 115.

The senior batsman, playing his 30th Test, surpassed his previous best of 177 during his debut game against the West Indies in 2013.

Sharma, who has three double centuries in his already illustrious one-day career, smashed the ball all around as he hit 28 fours and six sixes in his 255-ball stay.

He successfully reviewed an lbw decision on seven and survived a dropped catch on 28 on day one.

Rahane, who started the Sunday on 83, became debutant spinner George Linde's first Test victim and the only Indian wicket to fall in the morning session.

Rabada struck twice to reduce India to 39 for three after the hosts elected to bat first on Saturday.

Bad light and rain forced an early end to the opening day with only 58 overs after play was called off.

Virat Kohli's India are aiming for a whitewash after already taking an unassailable 2-0 lead in the three-match series.