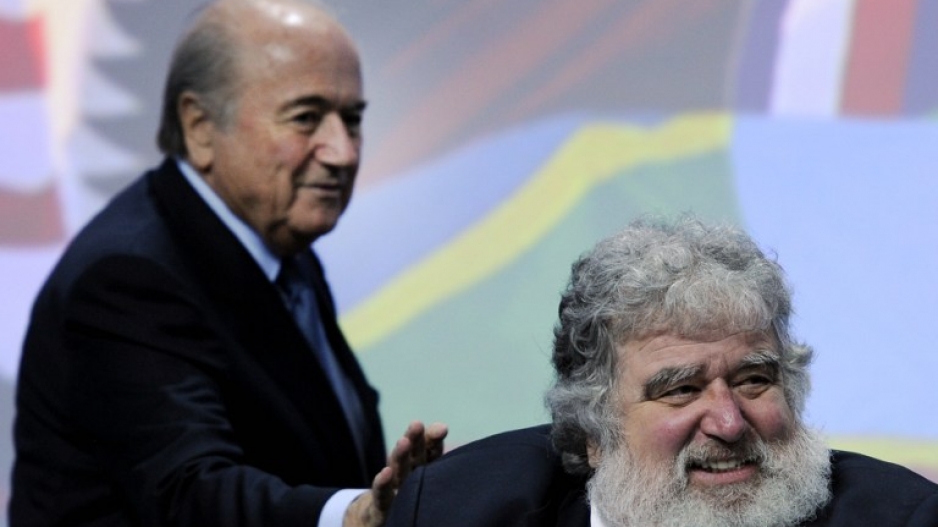 A picture taken on June 1, 2011 in Zurich shows Sepp Blatter (L) tapping the shoulder of then general-secretary of the Caribbean, North and Central American (CONCACAF), Chuck Blazer.

NEW YORK - Chuck Blazer admitted in court testimony released on Wednesday that he conspired with fellow FIFA executives to accept bribes during the process to choose hosts for the 1998 and 2010 World Cups.
The bearded multimillionaire, the face of North American soccer for two decades, pleaded guilty to racketeering, part of a massive US corruption case targeting world football&39;s governing body.
Blazer&39;s testimony is a key plank in the US investigation against FIFA, which the federal court document describes as a "Racketeering Influenced Corrupt Organization."
The 70-year-old admitted to a raft of charges related to his leadership of the North and Central American soccer body CONCACAF and membership of FIFA&39;s executive committee.
He is awaiting sentencing and may be called to testify in the trials of other sports executives. The most serious charge, racketeering, carries a maximum sentence of 20 years in prison.
But in the papers released on Wednesday, the other FIFA executives identified as co-conspirators are not named.
"Among other things, I agreed with other persons in or around 1992 to facilitate the acceptance of a bribe in conjunction with the selection of the host nation for the 1998 World Cup," Blazer said in his plea.
The 1998 World Cup was eventually awarded to France, ahead of a bid by Morocco. Another court document, detailing the charges, says that Blazer was present when a co-conspirator accepted a bribe in Morocco.
Blazer goes on to accept that he and "others on the FIFA executive committee" agreed to accept bribes in conjunction with the selection of South Africa to host the World Cup in 2010.
South African officials have strongly denied allegations by US investigators that they paid $10 million in bribes to secure the rights to host the competition.
Blazer also admitted that he and others "agreed to accept bribes and kickbacks" over broadcast and other rights to the 1996, 1998, 2000, 2002 and 2003 Gold Cup tournaments for teams governed by CONCACAF.
After pleading guilty to 10 counts, including tax evasion, in the closed-doors November 2013 hearing in New York, he was released on bail set at $10 million.
Blazer told Judge Raymond Dearie that he was being treated for rectal cancer, and had diabetes and coronary artery disease.
US media has reported that the Federal Bureau of Investigation is now looking into Sepp Blatter&39;s role as FIFA president in the tens of millions of dollars of bribes given to football officials.
Blatter shocked the football world on Tuesday by announcing that he was resigning, just four days after he was re-elected to his position.