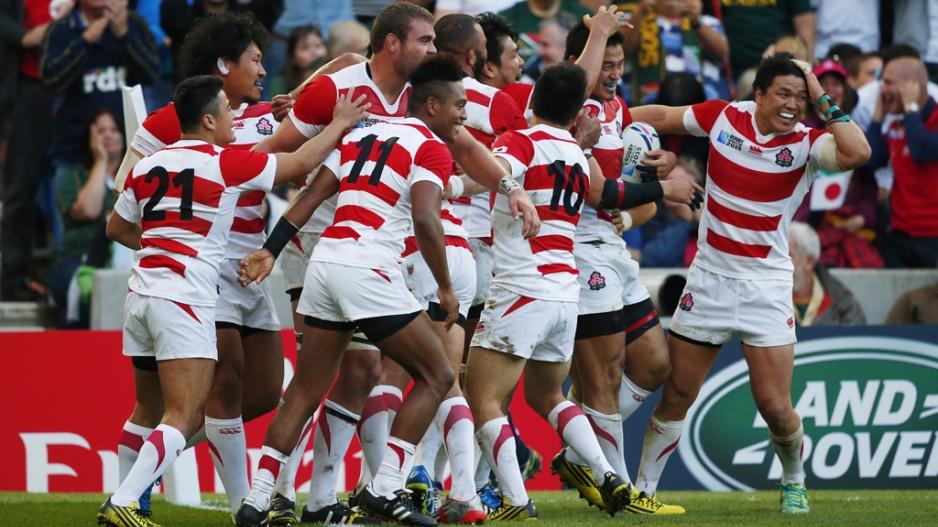 19 September 2015: Japan's Ayumu Goromaru (2nd R) celebrates scoring their second try with teammates, in their RWC2015 1st round Pool B match against South Africa in Brighton.

The first UPSET of the tournament...South Africa losing to the lowly ranked Japan...RSAvJPN RWC2015

Replacement Karne Hesketh raced in at the corner in the 84th minute to snatch victory from a pulsating contest in the Pool B opener.

Ferocious tackling from Japan kept them within two points of the Springboks at halftime (12-10) after driving mauls brought tries for South Africa&39;s Francois Louw and Bismarck du Plessis, with Michael Leitch touching down for Japan.

The reliable boot of fullback Ayumu Goromaru nudged Japan in front early in the second half, but that was quickly cancelled out by a try from South African lock Lood De Jager.

Both sides exchanged a series of penalties before Springboks snatched another try as replacement Adriaan Strauss burst through the defence.

But then Japan found space out wide, sending Goromaru in at the corner; his conversion levelling the scores.

Another Springbok penalty looked like breaking Japanese hearts before Hesketh grabbed the winner in overtime.

It was a game Heyneke Meyer&39;s charges had expected to win, with this being South Africa&39;s most experienced side in Test history, having 851 caps in their XV.

Japan, however, was tenacious.

Heyneke Meyer: "We let our country down. No excuses!" RWC2015 RSAvJPN