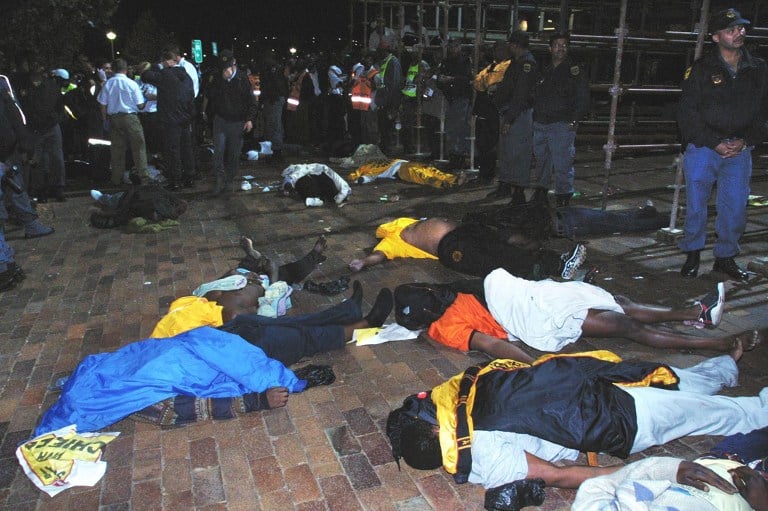 Some of the victims of a stampede lie on the ground 11 April 2001 at Ellis Park in Johannesburg.

JOHANNESBURG – “When I talk about it I still shiver to realise that people paid dearly with their lives.” That is how Kaizer Chiefs communications officer Vina Maphosa feels when he talks about the Ellis Park disaster.

Maphosa - who was just a normal football fan back then - was one of the thousands of spectators who had crammed into the stadium for the Soweto derby on the tragic night of 11 April 2001.

The stadium was packed to its 60,000 capacity but a further 30,000 people tried to make their way into the venue.

With the match deadlocked at 1-1, devastation became reality and there was a stampede. Forty-three fans succumbed to their injuries.

“From the side where I was seated I could see the tunnel where most people got injured and some died,” said Maphosa.

“I could see directly that there was something wrong there, it was not that people got stunned by the goal [Pirates had equalised a few minutes earlier].”

“I could actually see people watching and people carrying others to the field and at that moment I just shivered and realised that something was wrong.

“It was at that time when [then Chiefs public relations officer] Putco Mafani announced to the fans that ‘we have a serious situation’, but we could not hear him clearly as people were still blowing their vuvuzelas.

He remembers that after making his way safely out of the stadium, reality struck when he heard on the radio on his way home to the Vaal Triangle that people had died.

“It took days for me to forget that scene,” he adds.

“Luckily some of us were not hurt or lost our lives on that day.”

Since those days of the millennium in its infancy Maphosa has swapped his seat in the extra-strong section of the stadium for a club official spot at Chiefs.

“That event has changed the face of security and event management at PSL games,”

“Now there are some process that are involved to make sure that people are safe at the stadium.

“Now as a communications manager myself I don’t forget to publicise to the fans to come to the stadium early."

Maphosa said there was at sombre mood at Monday morning’s training session at the club headquarters in Naturena.

The players started the session with a prayer and a moment of silent. Brian Baloyi, Doctor Khumalo and Steve Komphela shared their accounts of the fateful day with the players.

The trio of Chiefs legends are now members of the side’s technical team.

11 April: The Team observed a moment of silence before training this morning in honour of the 43 supporters who died pic.twitter.com/bw8DCSQjXx