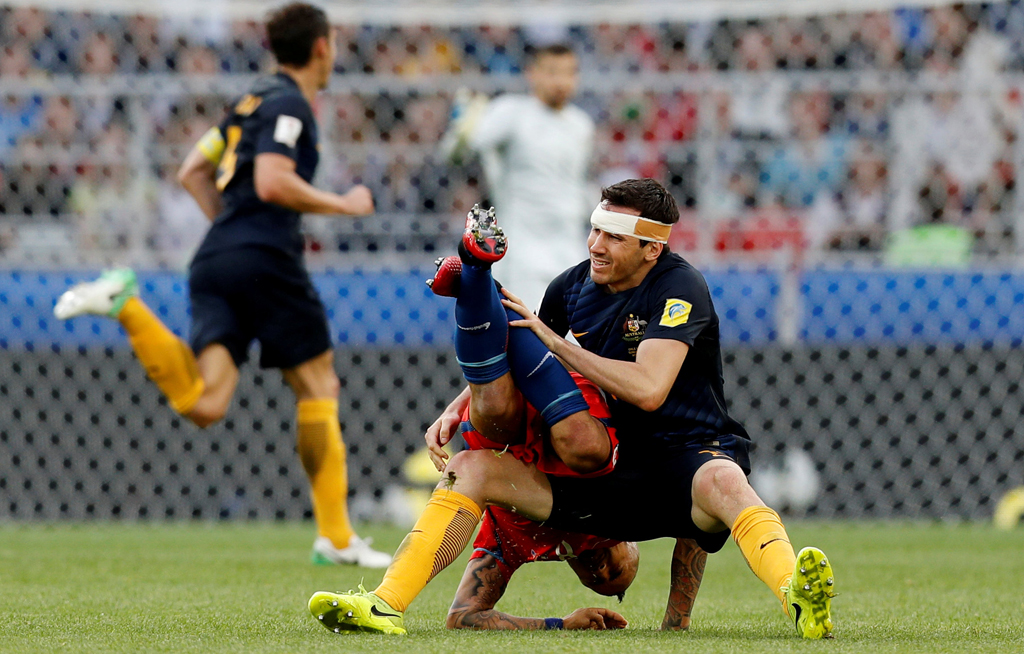 MOSCOW - Martin Rodriguez rescued a 1-1 draw for Chile against Australia on Sunday to send the South American champions through to a Confederations Cup semi-final against Portugal.

James Troisi steered Australia ahead on 42 minutes in Moscow, but Chile replied through half-time substitute Rodriguez on 67 minutes to advance as Group B runners-up behind Germany.

Germany progressed as group winners following a 3-1 victory over Cameroon in Sochi, with the world champions to face Mexico for a place in the July 2 final in Saint Petersburg.

.@C1audioBravo has a fantastic performance for @LaRoja in a 1-1 draw with Australia. Chile will play Portugal in the knockout stages. #mcfc pic.twitter.com/4L1esvDLzj

Chile's coach insisted they had not underestimated Australia after Troisi gave the Socceroos a shock lead.

"In fact that could have been a quarter-final in the World Cup, such was the level of this game," said Juan Antonio Pizzi.

"We are happy to reach the semi-finals and reach that aim. Now we must refocus on our next ambition."

Australia coach Ange Postecoglou regretted missed opportunities as they bow out of the Confed Cup after two draws and a defeat.

"We wanted to get out of the group and we haven't, so we are disappointed," said Postecoglou.

"They (Chile) are a world class team, a fantastic team, and have played some of the best teams in the world off the park.

"We needed energy to face that and the guys who came in did a great job.

"From my perspective, it was a great performance."

Their draw against Australia is enough to put them in the #ConfedCup semifinals against Portugal. #CHIAUS pic.twitter.com/m7TvHF8V5o

Alexis Sanchez went tumbling to ground early on following a last-ditch intervention from Mark Milligan, but the video assistant referee dismissed penalty claims as replays showed a clear touch from the Australian defender.

Claudio Bravo returned for Chile following a calf injury and the Manchester City goalkeeper produced a smart block to deny a lunging Massimo Luongo, although Australia forged ahead on 42 minutes.

A risky pass from Bravo was intercepted inside the Chile half, allowing Robbie Kruse to steer the ball across the face of the box to an unmarked Troisi who clipped over the advancing keeper.

Arturo Vidal nearly replied instantly when his stooping header was blocked on the line by Milligan with the rebound eluding Jose Fuenzalida.

Australian centre-back Trent Sainsbury missed a glorious chance for a second goal before the break, lashing wildly over on the volley after Chile's defence momentarily switched off.

But the introduction of Rodriguez and Pablo Hernandez at half-time proved crucial as Chile levelled midway through the second half.

Eduardo Vargas beat his marker to a looping ball in the area, knocking down into the path of Rodriguez who smuggled the ball beyond Matt Ryan for his first international goal.

Vargas headed fractionally wide after Sanchez had escaped down the left and picked out his striking partner, while Jamie MacLaren miscued badly in front of Bravo after a brilliant delivery from Troisi before the contest gradually petered out.