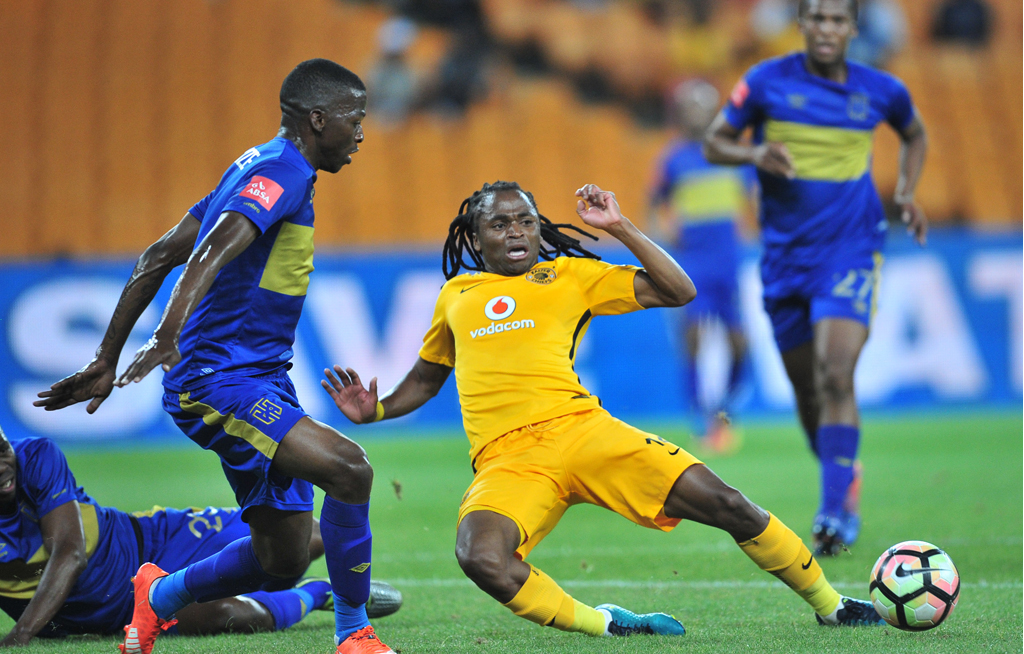 Siphiwe Tshabalala of Kaizer Chiefs gets his pass away during the Absa Premiership 2016/17 game between Kaizer Chiefs and Cape Town City at FNB Stadium.

SOWETO – Cape Town City came from a goal down to earn a 1-1 draw against Kaizer Chiefs at the FNB Stadium on Tuesday night.

The point takes City top of the PSL standings, following Bidvest Wits’ defeat to SuperSport United, the Tshwane side now above the Students in second position.

After a night which provided plenty of drama and had a bit of everything, the Glamour Boys are now without a win in their last seven games.

It started well for Steve Komphela’s men and Chiefs took the lead in the fifth minute when George Maluleka’s sweetly-struck shot was deflected by Mitchell Katsvairo past City goalkeeper Shu-aib Walters and into goal.

It could have been 2-0 in the 10th minute when some sloppy play at the back from the visitors allowed Edmore Chirambadare in on goal, but he lacked the composure to find the net with only Walters to beat.

The Cape side, however, were able to play their way back into the game, enjoying some good possession and some nice interplay at times although they were not really able to create more than half chances.

And they were given further encouragement when the Soweto side were reduced to 10 men after a rash challenge by Sibusiso Khumalo on Thamsanqa Mkhize, just before the half hour mark.

Amakhosi could, however, have extended their lead as a few good chances came their way. But George Lebese miscued from inside the box after a brilliant solo run by Siphiwe Tshabalala on 32 minutes before Walters made a brave block to keep Ramahlwe Mphahlele from scoring at the near post after a quick throw-in.

It could, and should have been 1-1 in first half added time, but Sibusiso Masina’s header was adjudged not to have crossed the goal-line before Itumeleng Khune clawed the ball back – yet replays strongly suggested the goal should have been awarded.

The Cape side kept on turning up the pressure after the break and had their equaliser seven minutes into the second half when Matthew Sim’s shot from 35-yards out smacked into Lorenzo Gordinho’s foot and looped over Khune and into goal.

Eric Tinkler’s side were sniffing blood and upped their efforts on attack, Lehlohonolo Majoro testing his former team-mate Khune with a viciously struck shot midway through the second half. Khune made the save, but injured himself in the process and was replaced by Nhlanhla Khuzwayo.

Chiefs’ numerical disadvantage withstanding, it was perhaps a measure of just how far the newly-formed City side have come this season as they had the Soweto giants on the ropes for the final 20 minutes of the game.