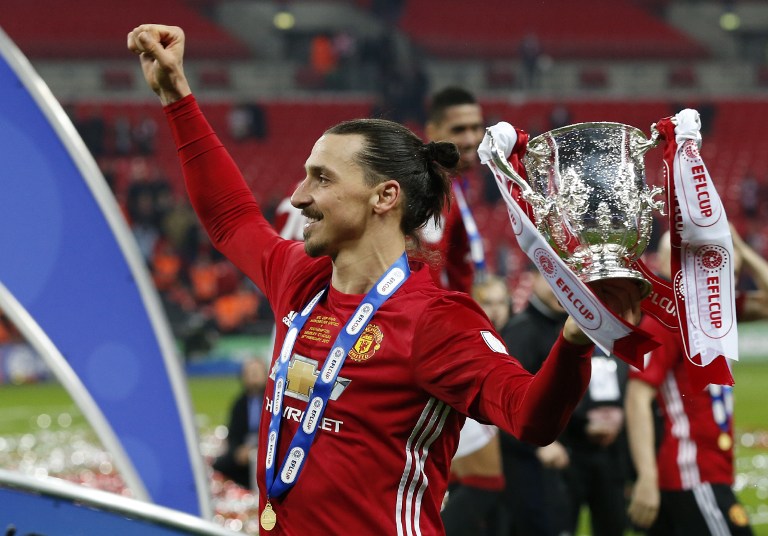 Manchester United's Swedish striker Zlatan Ibrahimovic celebrates with the trophy on the pitch after their victory in the English League Cup final.

JOHANNESBURG - Manchester City were kept at bay for 120 minutes by second-tier side Wolverhampton Wanderers before winning 4-1 in a penalty shootout to reach the League Cup quarter-finals on Tuesday.

No other team has managed to stop Pep Guardiola&39;s free-scoring City finding the net this season as the Premier League leaders have notched 42 goals from 13 games in all competitions.

FILE: Manchester City players wait together before the penalty shoot-out in the English League Cup fourth round football match between Manchester City and Wolverhampton Wanderers at the Etihad Stadium in Manchester, north west England, on October 24, 2017. Credit AFP

But City, seeking a club record 12th straight win, met their match in the Championship leaders and had keeper Claudio Bravo to thank for keeping them in the game before they eased through in the shootout with Sergio Aguero scoring the final penalty.

Both sides kept just two players from the teams they fielded at the weekend, a familiar theme on the night with the 12 teams in six matches collectively making a total of 99 changes.

Holders Manchester United made eight changes to the side humbled by Huddersfield Town on Saturday but were too strong for Swansea City with Jesse Lingard scoring both goals in a 2-0 win.

"The attitude was good," said manager Jose Mourinho, who had criticised his team after their weekend Premier League defeat.

Arsenal manager Arsene Wenger even put out an entirely new starting XI from that which faced Everton on Sunday and had substitute Eddie Nketiah to thank for the 2-1 extra-time win over another second-tier side Norwich City.

The 18-year-old scored twice -- his first goals for the club -- including one with his first touch 15 seconds after coming on in the 85th minute. The goal was the first scored by an Arsenal player born after the Frenchman took over as manager.

Nketiah added his second six minutes into extra time as Arsenal, who had trailed to Josh Murphy&39;s 34th-minute opener, finally saw off the spirited challenge of the visitors.

Hodgson endured an ill-fated spell in charge at City in 1982 and had an equally chastening night on his return 35 years later as City claimed their third top-flight scalp of the season to reach the last eight for the first time since 1989.

Leicester City caretaker manager Michael Appleton made it two wins from two as his Midlands side came from behind to beat Leeds United 3-1 with goals from Kelechi Iheanacho, his first for the Foxes, Islam Slimani and Riyadh Mahrez.

Bournemouth&39;s Callum Wilson scored on his return from long-term injury as they beat Middlesbrough 3-1 to reach the quarter-finals for the second time in their history.