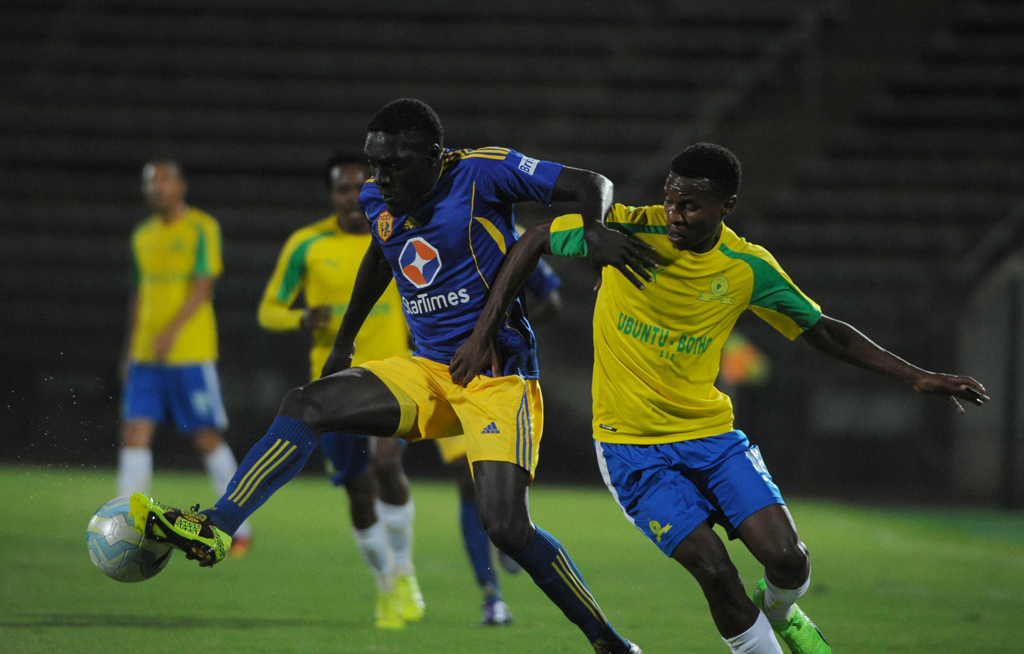 PRETORIA – Mamelodi Sundowns got their title defence off to a winning start as they beat Ugandan league champions Kampapa Capital Authority FC 2-1 in a CAF Champions League first round, first leg match at the Lucas Moripe Stadium in Atteridgeville, near Pretoria on Friday evening.

Much damage was done within the first five minutes of the match, as first the home team’s Ivory Coast central defender Soumahoro Bangaly headed home a free kick delivered by left back defender Tebogo Langerman in the second minute, before fellow centre back Ricardo Nacimento scored from the penalty spot three minutes later, after Kampala defender Joseph Ochaya had brought down Thapelo Morena.

Coach Pitso Mosimane showed just how spoilt for choice he is with the African league and Super Cup champions able to go into a match of this nature with experienced strikers Anthony Laffor and Sibusiso Vilakazi on the bench, with the target man role left to Columbian goal-getter Leonardo Costa.

It was Costa who headed home another superb cross from Langerman in the 17th minute of the game to increase the lead, but referee Janny Sikazwe disallowed the goal, on the basis that midfielder Percy Tau had fouled a Ugandan player.

However, Mosimane will be fuming that his side gave away an all-important ‘away goal’ to the Ugandans in the 72nd minute when striker Geofrey Ssenrenkuma side footed home wide of goalkeeper Wayne Sandilands. Ssenrenkuma was one of the visitors who knew the South African setup well, having played for Cape Town side Vasco da Gama when they were in the Absa Premiership back in 2011.

Tau and Hlompho Kekana both had decent chances in the second half to extend Sundowns’ lead but shot wide of the target.

The Ugandans currently top their domestic league with 41 points from 18 games, and went into the games off the back of three consecutive Ugandan League match wins. Their only previous dealings with South African opposition was back in 2009, when they beat Supersport United 3-2 on aggregate in the second round of the same competition.

Sundowns, who have now played no less than 10 matches in 6 weeks since PSL action resumed at the start of February after the January break for the African Cup of Nations tournament, will rue not having capitalised on more goal-scoring chances at home, but on the night were simply too football street-smart for the Ugandans.

The Chloorkop-based side will now  turn their attention back to the Absa Premiership where they occupy fifth place with 33 points from 16 matches, as they prepare to face Polokwane City in Polokwane on Tuesday night, before leaving for Kamapala the next day. The first round, second leg encounter against the Ugandans will take place next Friday.