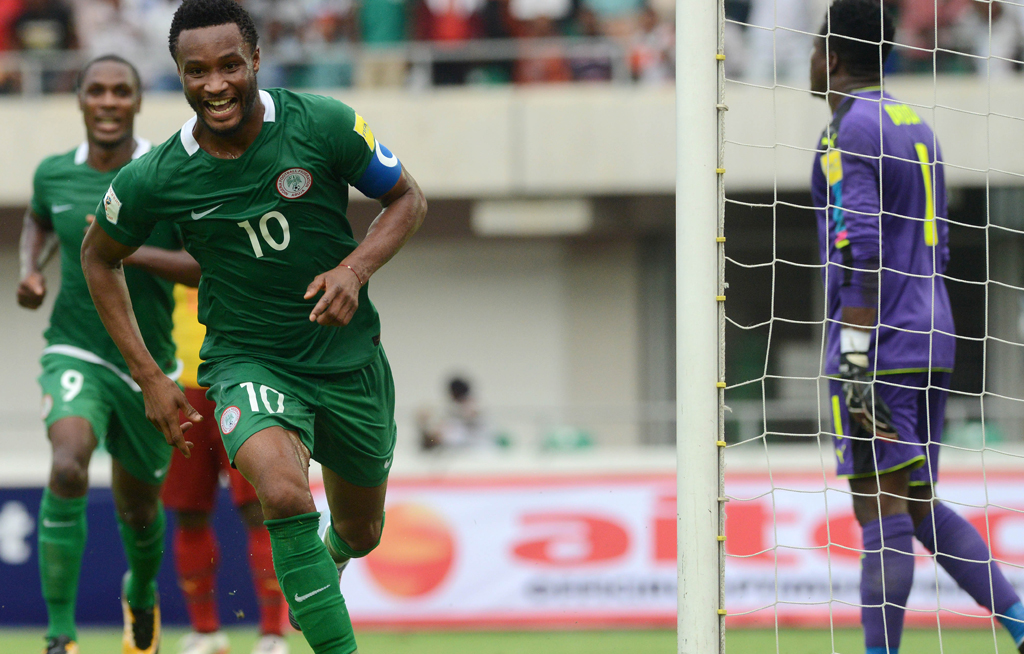 Mikel Obi of Nigeria celebrate his goal with team mate during the 2018 FIFA World Cup Qualifier match between Nigeria vs Cameroon on September,1st 2017 at Godswill Akpabio Stadium.

JOHANNESBURG - Nigeria survived a late Cameroon onslaught to draw 1-1 in Yaounde Monday and move closer to qualifying for the 2018 World Cup in Russia.

Moses Simon put Nigeria ahead on 30 minutes and substitute Vincent Aboubakar equalised from a 75th-minute penalty at Stade Ahmadou Ahidjo to spark a rally by the hosts.

Unbeaten leaders Nigeria moved to 10 points from four matches in Group B and a home win over Zambia on October 7 will clinch a sixth World Cup appearance.

Dropping two points in Yaounde eliminated seven-time World Cup qualifiers Cameroon as only group winners go to Russia and they trail Nigeria by seven points with two matches to play.

Among those dropped were striker Aboubakar and winger Christian Bassogog, whose second-half introductions lifted the "Indomitable Lions" and put pressure on the "Super Eagles".

A collision between Arnaud Djoum and Nigeria goalkeeper Ikechukwu Ezenwa led to the spot-kick, and Aboubakar scored with a shot into the middle of the net.

Cameroon had another penalty appeal rejected by the impressive Gambian referee as they pushed for a first win in the "group of death" that includes Algeria and Zambia, who meet Tuesday.

Ezenwa came to the rescue six minutes from time with a double save, the second particularly being brave as he dived at the feet of Djoum and was injured.

But for much of the match it looked like the central Africans were going to suffer a first World Cup qualifying defeat at home since losing to Congo Brazzaville in October 1976.

Nigeria have dedicated the qualifying campaign to goalkeeper Carl Ikeme, who is battling leukaemia in England.

The disease was discovered when he went for a routine pre-season medical at second-tier club Wolverhampton Wanderers three months ago.

"Carl is constantly in my thoughts, those of the other coaches, the players and the officials," said Germany-born Nigeria coach Gernot Rohr.

Guinea are away to Libya later Monday needing maximum points to have any chance of catching Group A leaders Tunisia.