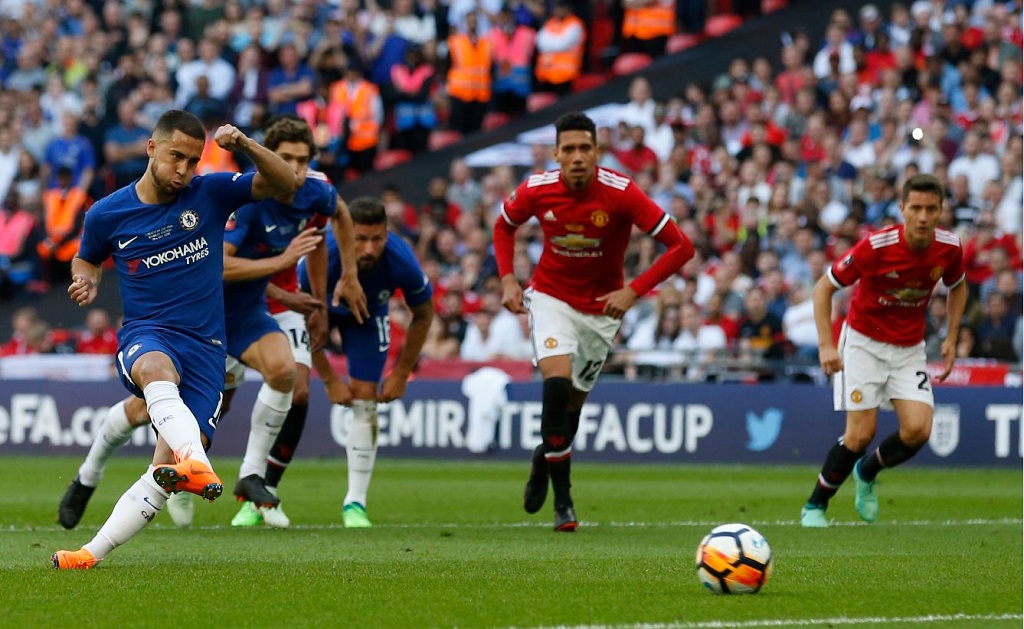 File: Chelsea's Belgian midfielder Eden Hazard (L) shoots and scores from the penalty spot during the English FA Cup final football match between Chelsea and Manchester United at Wembley stadium in London on May 19, 2018.

LONDON - Eden Hazard&39;s first-half penalty proved decisive as Chelsea salvaged their season by beating Manchester United 1-0 in the FA Cup final in what is widely expected to have been manager Antonio Conte&39;s swansong on Saturday.

The Belgian&39;s searing pace earned the spot-kick in the 21st minute after forcing Phil Jones into a desperate lunging tackle and he coolly tucked it away for what proved to be the winner.

Jose Mourinho&39;s United were dismal in a scrappy first half and although they improved significantly after the break, they were denied a record-equalling 13th FA Cup triumph.

Chelsea, whose Premier League title defence fizzled out into a fifth-placed finish, survived several scares but defended superbly as Conte celebrated his first domestic cup honour as a manager having seen his side beaten by Arsenal a year ago.

It was only Mourinho&39;s third defeat in 15 Cup finals as a manager and his first in an English showpiece final.

In a poignant end to the afternoon, Chelsea captain Gary Cahill was presented with the cup by Jackie Wilkins - wife of former Chelsea and United great Ray Wilkins who died last month.

"This was to save our season, we haven&39;t had a magnificent season by any stretch. We are used to winning, I&39;m not saying that in an arrogant way," said Cahill, whose assured display would have impressed England manager Gareth Southgate.

"We had a lot of defending to do, they pushed us until the very end. We are buzzing. This a dream come true because it is my first trophy win as captain of the club."

The sunshine that illuminated the day&39;s other big occasion down the road at Windsor helped provide a carnival-like atmosphere as red and blue clad fans streamed into Wembley.

Pre-match pyrotechnics aside, however, the opening stages of the showpiece hardly offered up party football with a predictably cagey approach.

Hazard, also rumoured to be on his way out of Stamford Bridge, stood out from the crowd, though, and the Belgian served notice of his threat in the eighth minute when he jinked past Jones and fired in a shot that David de Gea saved with his feet.

In a portent of what might await England when they face Belgium in the World Cup next month, Hazard&39;s pace proved calamitous for United in the 21st minute.

Again Jones was cruelly exposed as Hazard latched on to Cesc Fabregas&39;s first-time pass and accelerated into the area where the lumbering defender felled him with a desperate lunge.

Michael Oliver pointed to the spot and booked Jones, although Chelsea manager Conte screamed for a red card, and side-footed his spot-kick to De Gea&39;s left.

Jones should have made amends just before the break but headed wastefully wide.

Kicking towards their own fans on the resumption, United raised the tempo and Chelsea&39;s defence came under pressure with Marcus Rashford forcing a first save by Thibaut Courtois.

Suddenly Chelsea were pinned back and Alexis Sanchez slid the ball into their net after Courtois had clawed out a Jones header, but the Chilean was adjudged to have been offside.

Chelsea were reduced to the odd breakaway and from one N&39;Golo Kante burst into the area before teeing up Marcos Alonso who delayed his shot and was denied by De Gea.

England World Cup duo Rashford and Jesse Lingard were hauled off by Mourinho in the 73rd minute with strikers Romelu Lukaku, who had not played since getting injured last month, and Anthony Martial sent on to try and rescue United&39;s day.