How the World Cup favourites are shaping up 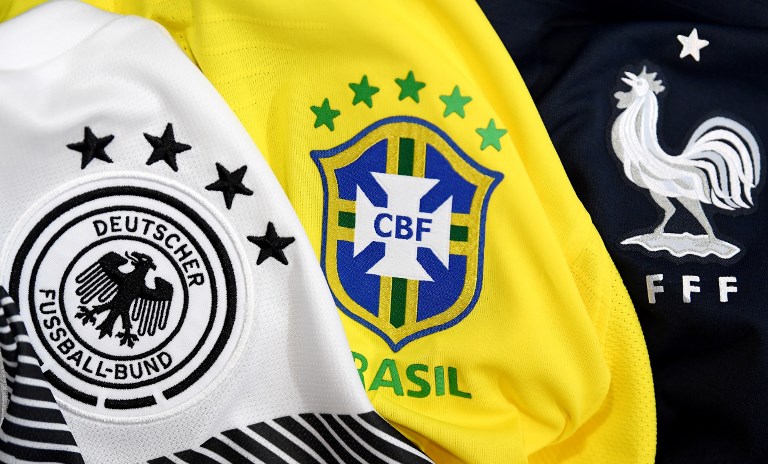 File: The logos of the Brazilian, German and French national football team for the FIFA 2018 World Cup football tournament.

SOCHI - The phoney war is over and most of the big guns have arrived in Russia ahead of the start of the World Cup on Thursday. AFP Sport takes a look at how the favourites are shaping up.

In 2014, Brazil was being widely tipped for success on home soil but their campaign unravelled in spectacular fashion with a 7-1 semi-final defeat to eventual winners Germany.

Now the five-time champions look the real deal again. Coach Tite has transformed their fortunes and they are in a confident mood.

The absence of the injured Dani Alves at right-back is a blow but Neymar has proven his fitness in recent friendly matches, scoring in wins against Croatia and Austria. His goal in Vienna on Sunday, after his first start following a foot operation three months ago, was stunning.

Manchester City&39;s Gabriel Jesus has been the most prolific goalscorer during Tite&39;s time in charge, in which the team have won 17 out of 21 matches.

"We are handling the expectation. It&39;s good. We are going to challenge ourselves," said the coach after Sunday&39;s final warm-up game. "There is only one little detail. A new stage begins now."

Germany is the holders and their reputation as a team that always delivers on the big stage tempers the doubts arising from their performances in recent friendlies.

Joachim Loew&39;s side went five games without a win before labouring to a 2-1 victory over Saudi Arabia in their final warm-up in Leverkusen on Friday.

The fact that first-choice goalkeeper Manuel Neuer has hardly played since September after injury is a concern but the Germans have made at least the semi-finals in each of the past four World Cups and are bound to feature prominently again in Russia.

And their recent friendly results? "I am conscious of the fact that in friendly matches it is not necessarily about the result," coach Loew -- who has left Manchester City&39;s Leroy Sane behind -- reminded Kicker.

Like Brazil, Spain have come to Russia with something to prove after a poor showing in 2014, when they were knocked out in the group stage.

They are yet to lose in two years under Julen Lopetegui, completing their preparations with a 1-0 win over Tunisia on Saturday in Krasnodar.

It was not the most convincing performance but Iago Aspas advanced his case for a starting role in attack in Friday&39;s Group B opener against Portugal with a late winner.

Rodrigo of Valencia and the bruising Diego Costa are the other options up front for Lopetegui.

The coach has overseen changes but there are still likely to be as many as seven starters against Portugal who also started the 2-0 defeat against Italy at Euro 2016.

"Whatever we happen to do in this World Cup will depend on the answers we give on the field. We are going with a ticket to play three matches and the rest we have to earn," Lopetegui told El Pais.

Optimism has been growing in France about the prospects of Les Bleus, but Saturday&39;s 1-1 draw with the United States was a timely reminder for Didier Deschamps&39; side that they still have work to do.

They needed a late Kylian Mbappe goal to earn a draw in their final friendly, which followed wins against Ireland and Italy. Sports daily L&39;Equipe called it a "cold blast" before the French travelled to Russia on Sunday.

Paul Pogba&39;s performance in that game was a boost, though, and Deschamps appears to have found a formation that suits him.

A diamond midfield accommodates Pogba and allows Antoine Griezmann to play just behind Mbappe and Olivier Giroud up front, but there is maybe a worry in goal, where Hugo Lloris no longer looks so reliable.

Nevertheless, they are capable of reaching the last four.

Argentina is lucky to be in Russia at all after a chaotic qualifying campaign and their build-up to the finals has been far from smooth.

File: Argentina&39;s forward Lionel Messi (L) celebrates with teammate Gabriel Mercado (C) for his first goal during their friendly international football match between Brazil and Argentina at the MCG in Melbourne on June 9, 2017.Credit:AFP

The build-up has been further hampered by the loss to injury of Manuel Lanzini and critics say Argentina are relying solely on Lionel Messi for success.

That may be unfair though. Sampaoli has talent in his squad, including the exciting Giovani Lo Celso in midfield and an attack also featuring Gonzalo Higuain, Sergio Aguero, Paulo Dybala and Angel Di Maria.

However, even if they manage to win a challenging group, Spain could lie in wait in the quarter-finals for the 2014 runners-up.