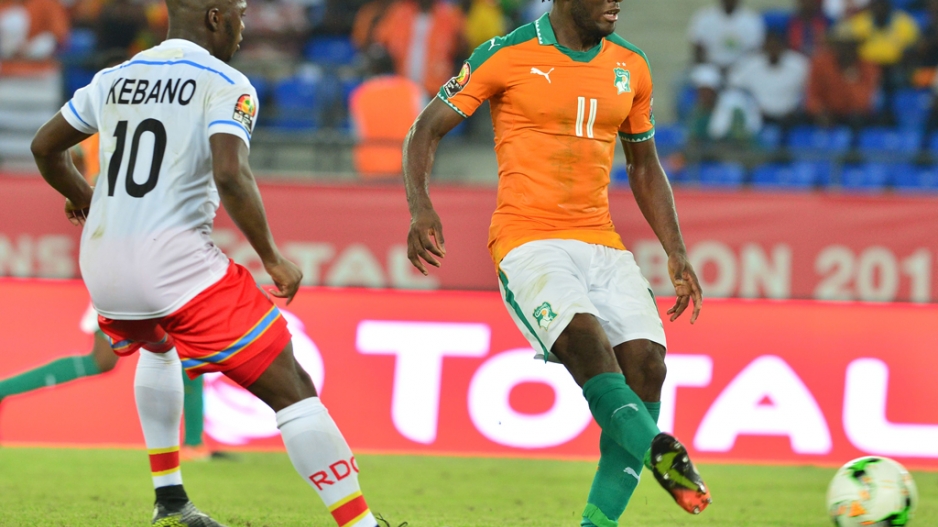 Franck Kessie of Ivory Coas challenged by Neeskens Kebano of DR Congo during the 2017 Africa Cup of Nations Finals match between Ivory Coast and DR Congo at the Oyem Stadium in Gabon on 20 January 2017.

OYEM, Gabon - Reigning champions the Ivory Coast will need to beat the Morocco of their former coach Herve Renard to qualify for the Africa Cup of Nations quarter-finals after a second draw in as many games on Friday.

The Ivorians had to come from behind twice to draw 2-2 with DR Congo in Oyem in the day's early game with Wilfried Bony and Geoffrey Serey Die getting their goals.

Later, Renard's Morocco came from behind to defeat Togo 3-1 at the same venue with Aziz Bouhaddouz, Romain Saiss and Youssef En-nesyri netting after Mathieu Dossevi had opened the scoring.

DR Congo are top of Group C with four points and know a draw with Togo in their last game in Port-Gentil on Tuesday will take them through to the quarter-finals.

Meanwhile, the Ivory Coast trail Morocco by a point and so have no choice but to win when the teams clash in their last match.

"We still have our destiny in our own hands, that is the important thing," said Ivory Coast coach Michel Dussuyer, a Frenchman like his predecessor Renard.

"Everything will be decided in the final round of games."

The Leopards of DR Congo took an early lead when Neeskens Kebano slammed home, but Bony rose to head in the equaliser.

The Congolese were back in front before the half-hour mark as Junior Kabananga, who plays his club football in Kazakhstan, headed home at the back post.

However, midfielder Serey Die's deflected long-range strike made it 2-2 in the second half and the Elephants could have won it late on, but Salomon Kalou's stoppage-time effort was disallowed for a marginal offside call.

"I'd like to reassure everyone, there is no need to worry. In 2015 we started like that and ended up as champions," said Serge Aurier, part of the side under Renard that drew their first two games in Equatorial Guinea before going on to win the trophy.

Friday's late game saw Renard come up against his coaching mentor, current Togo boss Claude Le Roy, as Morocco sought to breathe life into their campaign after an opening defeat to DR Congo.

The evening did not start well in front of another sparse crowd as Floyd Ayite set up Dossevi to fire home inside five minutes for Togo.

However, Morocco had turned things around before the midway point in the first half thanks to two goals from set-pieces.

First Togo 'keeper Kossi Agassa came and missed a corner and St Pauli forward Bouhaddouz headed in at the back post. Then Faycal Fajr whipped in a free-kick from wide on the left and midfielder Saiss, who plays his club football in England, headed home.

With Le Roy's side forced to push men forward as they chased the game, Morocco put the outcome beyond doubt in the 72nd minute.

Not long on from the bench, Malaga's En-nesyri tried his luck on his left foot from 25 yards and the ball bounced in front of Agassa on its way in as Morocco secured the most convincing win of the tournament so far.

"Honestly the first match was much better but sometimes in the African Cup you need to get down to work and be solid," said Renard, kitted out in his trademark white shirt.

Of the prospect of a showdown with the Ivorians, he added: "We knew when the draw was made that it would be a decisive match. It will be the hardest game of the three."

On Saturday, 2015 runners-up Ghana will become the second team to secure their place in the last eight after Senegal if they beat Mali in Port-Gentil in Group D.

Later, record seven-time champions Egypt meet Uganda, for whom a defeat will mean certain group-stage elimination in their first appearance at the tournament in 39 years.