Pique to carry on for Spain despite Catalonia backing 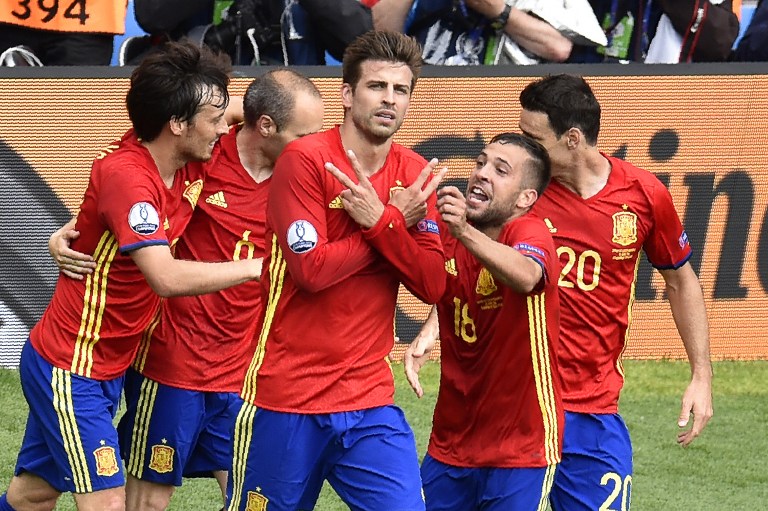 Spain's defender Gerard Pique (C, top) gestures in celebration after scoring during the Euro 2016 group D football match between Spain and Czech Republic at the Stadium Municipal in Toulouse on June 13, 2016.

MADRID - Under-fire Gerard Pique on Wednesday expressed his pride at playing for Spain, insisting he would continue with the Spanish national team despite his outspoken defence of the independence referendum in Catalonia.

"It is not incongruous," said Pique of his intention to carry on despite his views on the wealthy northeastern Spanish region's right to self-determination.

"I take it to the extreme, I believe that a person wanting independence could play in the Spanish team because there is no Catalan team and because that person has nothing against Spain."

Pique, who was jeered by onlookers during Spain's open training on Monday, added: "Why could a person wanting independence not play for the Spanish team? It's a question I put forward, and it's not my case. Why could he not?"

The Barcelona central defender on Sunday cast his vote in a referendum deemed constitutionally illegal by Madrid which was scarred by ugly clashes between voters and security forces.

Despite playing a crucial part of the Spain sides that won the 2010 World Cup and Euro 2012, Pique is routinely jeered when representing his country.

He has already stated his intent to retire from international football after next year's World Cup, but insisted he could step aside sooner if Spain coach Julen Lopetegui or the federation believe his political stance to be problematic.

"It is best to continue and accept this challenge of trying to reverse (the criticism)," Pique said Wednesday after having decided against turning his back on Spain.

"I feel very proud to be in the Spanish team... It's impossible to question my commitment. I've been here (in the national set-up) since the age of 15 and consider it as family."

Pique went on to ask for understanding of his political views.

"We are players, but above all we are humans," he said. "Humans have opinions and opinions come from our environment, where we live and through the information we get. It's not possible for us all to think alike.

"I think that through dialogue and respect we always get to the right place."

Pique added that he spoke to teammates "who think differently from me. In the end we come to the conclusion that there are things that could be worked out, but that's not for us to do, we're footballers".

Spain play Albania in Group G of European qualifying on Friday and Israel three days later, with one win from these final two games likely to be enough to automatically qualify for next year's World Cup in Russia thanks to their far superior goal difference over second-placed Italy.