Violence has no place in football, says Khoza 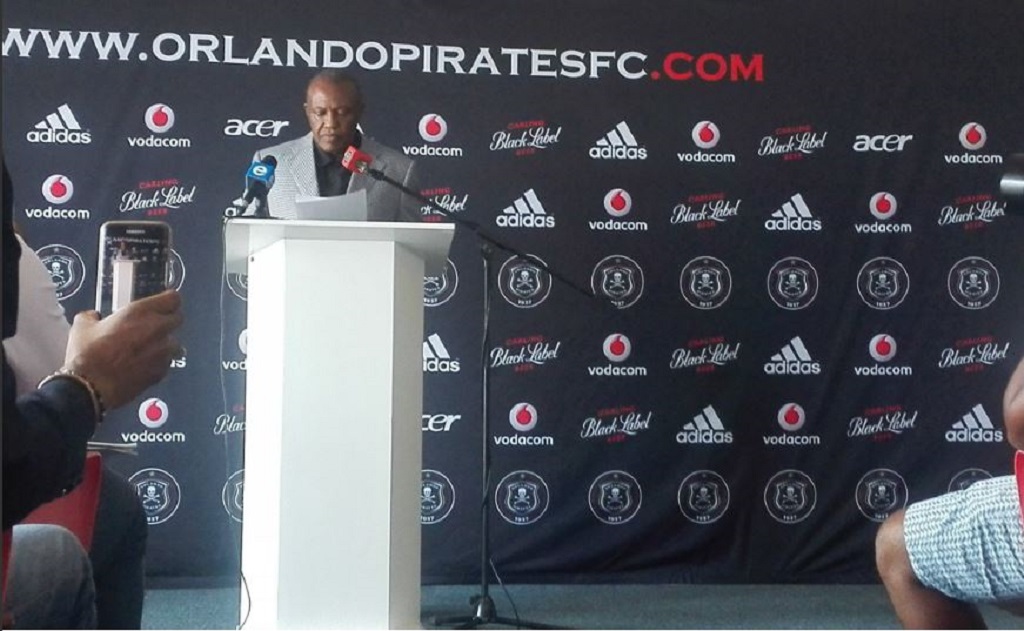 Orlando Pirates chairman Irvin Khoza addresses the media in Johannesburg on 13 February 2017 about the violence at Loftus Versfeld on Saturday.

JOHANNESBURG – Orlando Pirates chairman Irvin Khoza says there is no place for violence in football or in society in general.

He was commenting on Monday  after Pirates fans invaded the pitch and hurled objects during their league match against domestic and African champions Mamelodi Sundowns on Saturday afternoon in Pretoria.

Some spectators were taken to hospital and television broadcast equipment and stadium infrastructure were damaged.

Dr Khoza: We are used to winning and have a history we need to protect but it should not be at all costs. #orlandopirates

Khoza stressed that the behaviour of the supporters' was unjustified and that the full process of law should take its course.

“Violence has no place in our football, no matter how strongly you feel,” said Khoza. The Pirates supports ran amok after their team was defeated 6-1 by Sundowns.

“When we engage in violence it defeats the legitimacy of our feelings and grievances.

“Violence diminishes your reasons, no matter how good they are because now we are talking about violence and not the reasons why you stood up from your seats.”

Khoza said Pirates was committed to ensuring that Saturday's violent behaviour  was not repeated.

“We have supports and fans, some are known to us and some unknown to us,” Khoza.

“So therefore wherever we can assist we will do everything to co-operate with the investigation, but this matter resides with the league.

Dr Khoza: I can't answer questions about security during the game. I'm speaking as the chairman of Orlando Pirates not PSL. #orlandopirates

Khoza, who wears the hat of chairman of both the league and Pirates, refused to comment on sanctions the club could face.

“Because I am chairman of both Pirates and the league I must not even make a comment,” said Khoza who is known as the Iron Duke.

“That matter now resides with the disciplinary committee. I desist and protect myself not to make a comment on that one because it might put me in a difficult position."

Orlando Pirates chairman Irvin Khoza says a new coach will be announced by next week Monday.

Khoza revealed that the club would announce its new coach next week on Monday.

Pirates have been without a coach since their previous humiliating loss to SuperSport United.

Caretaker-coach Augusto Palacios has been at the helm since Muhsin Ertugral resigned following the 6-1 thrashing.

“What I can give a guarantee is that because of what has happened is that net week on Monday we will announce a new coach,” said Khoza, who admitted that the pressure of coaching Pirates had been enormous on the men manning the dugout.

“We had hoped that by the end of January he would have been available but the buyout clause was a problem.

“We are fast tracking everything because we cannot wait for May,” said Khoza.