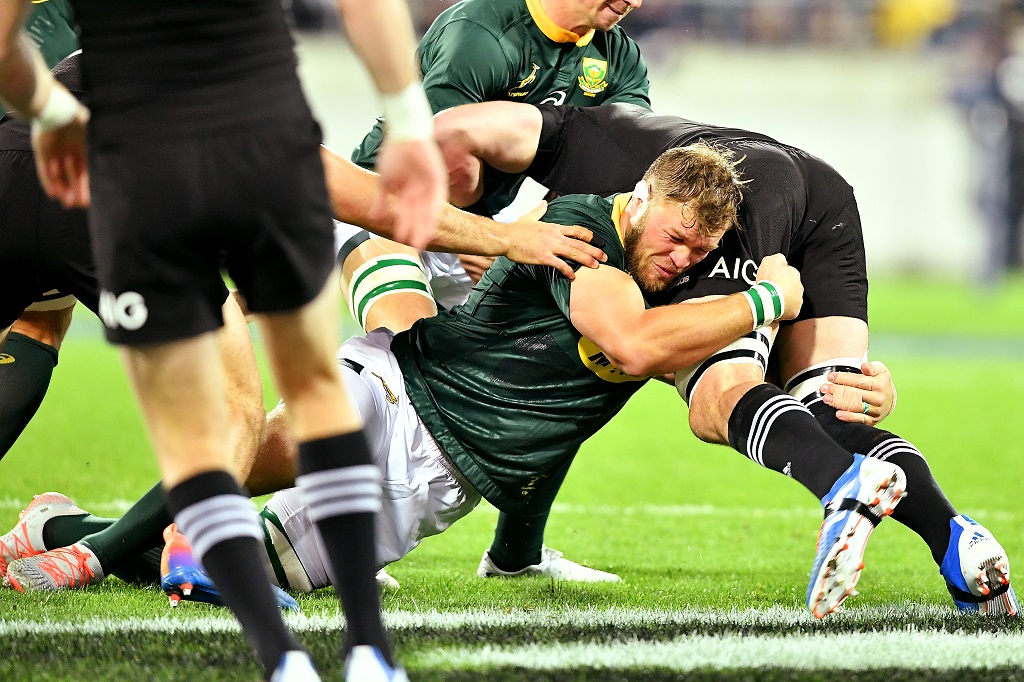 File: Malcolm Marx of the Springboks tackles Codie Taylor of the All Blacks during the 2019 Rugby Championship Test Match between New Zealand and South Africa at Westpac Stadium on July 27, 2019 in Wellington, New Zealand.

This is it. Now the Rugby World Cup really starts. Two powerhouses lock horns at the International Stadium in Yokohama City on what will be Saturday afternoon in South Africa.

It is set to be the usual case of no quarter given whenever South Africa meet New Zealand and on paper it would certainly appear that way with the Springboks enjoying positive fortunes of late and the All Blacks poised to maintain their dominance at major competitions.

But it may be argued that Springboks have the upper hand when you look at the build up to the tournament. Earlier this year, Rassie Erasmus’ side fought tooth and nail for a draw in Wellington during the Rugby Championship. Gritty doesn’t begin to describe that performance.

It has all seemed to come together for the Springboks as they’ve gone through the year unbeaten and seem to have peaked just in time for a crack at claiming a third Rugby World Cup trophy.

But it is the All Blacks who are the favourites for the encounter at this stage with a quote of 40/85 while the Springboks are given at 19/10. Think they’ll fight to a draw for the second time this year? You can have 28/1 on that happening.

Looking at the history between these two sides doesn’t make for great reading if you are a Springbok fan given that they have only managed to beat the All Blacks twice in 10 matches with a single draw.

However, it is reassuring that the statistics tell us that when it comes to meeting each other at World Cup competitions it is dead even. Four meetings with each side winning twice.

You can take 8/11 on the Second Half being the highest scoring stanza of the match and 11/10 on the most points being accrued in the first half.

The last three encounters between these sides have been closely fought affairs. There was the draw in Wellington in July this year with a narrow two point loss in Pretoria towards the end of last year and a narrow two point victory in September 2018.

Speaking of scoring tries, do you have a player who you think will cross the whitewash during the match? There’s 22/10 on Cheslin Kolbe or Makazole Mapimpi dotting down at any time or 14/10 on Sevu Reece. Beauden Barrett, starting at fullback, is at 2/1 to score a try of his own in the match.

To view the full selection of betting for this Rugby World Cup match click here.