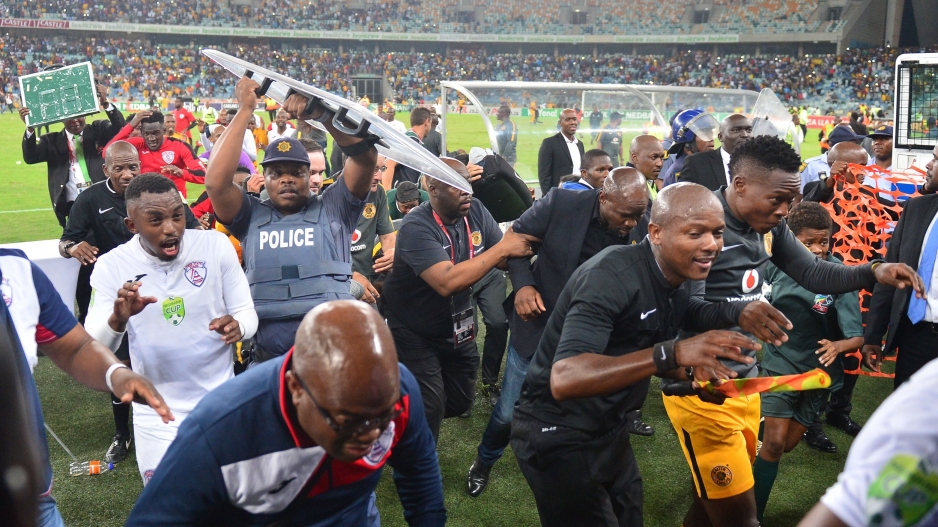 JOHANNESBURG - Two people have been arrested on Sunday for violence during the Kaizer Chiefs-Free State Stars game at Moses Mabhida Stadium in Durban, police say.

The Premier Soccer League (PSL), has condemned the lawlessness that broke out at the stadium on Saturday night.

At the end of the Nedbank Cup semi-final between hosts Kaizer Chiefs and Free State Stars, hundreds of supporters invaded the pitch and the security was unable to cope adequately with rampaging fans.

The PSL, the governing body for professional football in South Africa, said in a statement it strongly condemned the "acts of hooliganism and violence during the fixture between Kaizer Chiefs and Free State Stars.

&39;Hooliganism and thuggery of this nature have no place in football and acts of violence perpetrated by individuals are witnessed last night cannot be tolerated.

&39;The League will work closely with law enforcement to ensure that those responsible for this hooliganism are subjected to judicial processes."

Minister of Sport and Recreation, Toko Xasa says she was appalled by the behaviour of spectators at the game.

In a statement on Sunday, she condemned the violence.

Xasa said she was concerned by the continued breach of security at stadiums and endangering of lives.

“We can’t wait for another person to die before we act. PSL and stadium management must provide answers about what happened in Moses Mabhida Stadium.

"How did supporters manage to storm the ground and endanger people’s lives? Football is a beautiful game and I can’t sit idle while a few supporters are making a skunk of our game. Answers must be provided on what happened yesterday."

Nedbankcup Dejected looking Kaizer Chiefs players & technical team have just left the Moses Mabhida Stadium in Durban. They came in around 10h05 AM. It’s not clear what they came to do at the stadium. Last night violence broke out after Chiefs lost to Free State Stars.@eNCA pic.twitter.com/C48cPMirlZ

I can&39;t bring myself to watch the videos of the appalling seens of MosesMabhida, no matter how frustrated we are as fans nothing and I mean nothing will ever justify what happened last night.I hope @KaizerChiefs and @SAPoliceService do whatever is necessary to catch those pig&39;s.

Kaizer Chiefs has called for restraint from fans after the violence, which resulted in supporters and a security guard being admitted to hospital.

Xasa said the invasion of the pitch "continues to make a mockery of Sasrea [Safety at Sports and Recreational Events Act] as it clearly demonstrates that certain security elements are either not met or were never implemented, which warrants an investigation."

She said what made matters worse was that the violence occurred while reinstatement of the commission of inquiry into the FNB stampede was being considered.

“Violence will never be a solution, no matter how frustrated one might feel about one&39;s football club. I will never allow people’s lives to be in danger because of a few unruly football supporters. We must make football a family sport.” Xasa added.