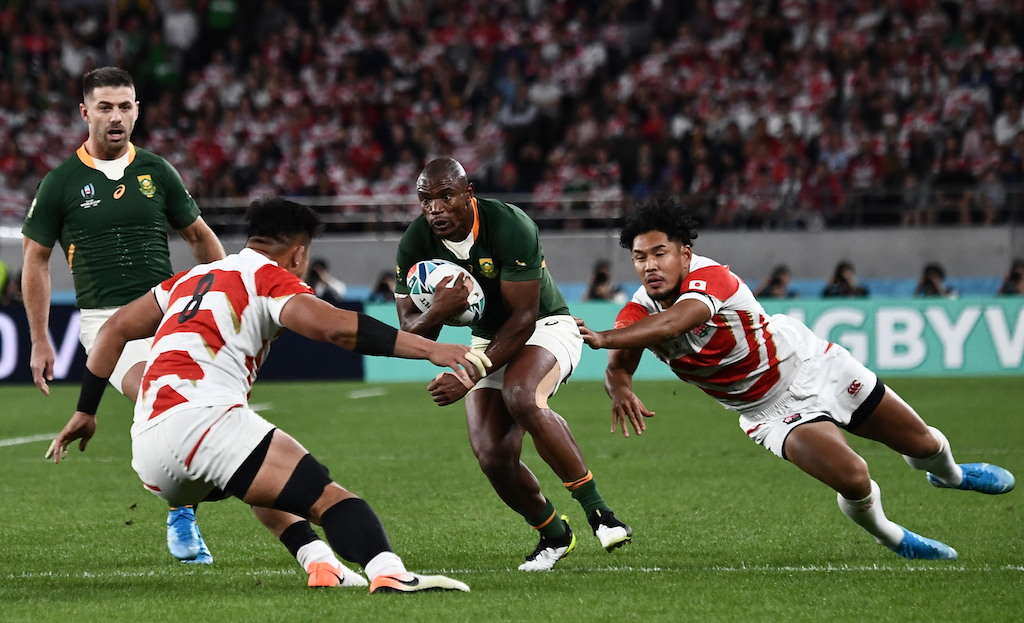 South Africa's wing Makazole Mapimpi (C) runs with the ball during the Japan 2019 Rugby World Cup quarter-final match between Japan and South Africa at the Tokyo Stadium in Tokyo on October 20, 2019.

TOKYO - South Africa shattered Japan's dreams of reaching the World Cup semi-finals with a pulsating 26-3 victory in Tokyo Sunday to set up a blockbuster last-four clash with Wales.

A double from wing Makazole Mapimpi broke the hearts of the Brave Blossoms, whose run to the knock-out stages has earned respect around the rugby world and lit up the first World Cup held in Asia.

Japan famously beat South Africa 34-32 at the last World Cup in an upset dubbed the 'Miracle of Brighton' but Sunday's match at Tokyo was far more comfortable for the two-time world champions.

South Africa coach Rassie Erasmus had staked out his intent by picking six forwards on the bench and the win was built on a dominant performance up front and a ferocious defensive effort.

The Springboks were on the scoresheet with just three minutes on the clock. The powerful South African pack drove Japan back in the first scrum, leaving Mapimpi with a one-on-one for the line.

The 29-year-old had been Japan's main tormentor with a hat-trick in a 41-7 warm-up victory two weeks before the World Cup and he was a handful again, running straight through fly-half Yu Tamura to dot down.

The under-pressure Japanese scrum got 10 minutes' respite when prop Tendai Mtawarira was sent to the sin-bin for a tip tackle on his opposite number Keita Inagaki - with the "Beast" perhaps fortunate not to see red.

Roared on by chants of "Nippon! Nippon!" from the passionate home crowd, the Japanese threatened the South Africa line but were kept out by a series of thumping tackles from the 14-man Springboks.

Eventually, the pressure told as the Japanese won a penalty at scrum time, which Tamura slotted in front of the posts to make it 5-3 with 20 minutes played.

Japan were winning plenty of possession and dragging the Springboks into their helter-skelter style of rugby, even flinging the ball around on their own line.

And South Africa were denied what looked like a try under the posts after the half-time gong had sounded when referee Wayne Barnes ruled that Damian de Allende had used a double movement.

South Africa came out as if they had been on the end of a stern talking to at half-time and two Handre Pollard penalties in the first 10 minutes of the second half settled the nerves of the travelling Springbok fans.

But South Africa were not in the clear and a Pollard penalty miss on 57 minutes left the hosts still in the game at 11-3.

A high tackle on Springbok scrum-half Faf de Klerk, who seemed to be everywhere, gave Pollard an easier shot and the two-time champions had some daylight.

It was fitting that man of the match de Klerk ended the game as a contest, racing in under the posts after a monumental rolling maul that went nearly half the length of the pitch.

The pacey Mapimpi then gave the win some gloss with his second score in the corner with less than 10 minutes to go.

South Africa now advance to the semi-finals to play Wales, who pipped France 20-19 earlier Sunday after Les Bleus went down to 14 men.

For their part, Japan can look back with huge pride on a run that has inspired the nation and lifted them to sixth in the world rankings, earning the admiration and respect of the rugby world.