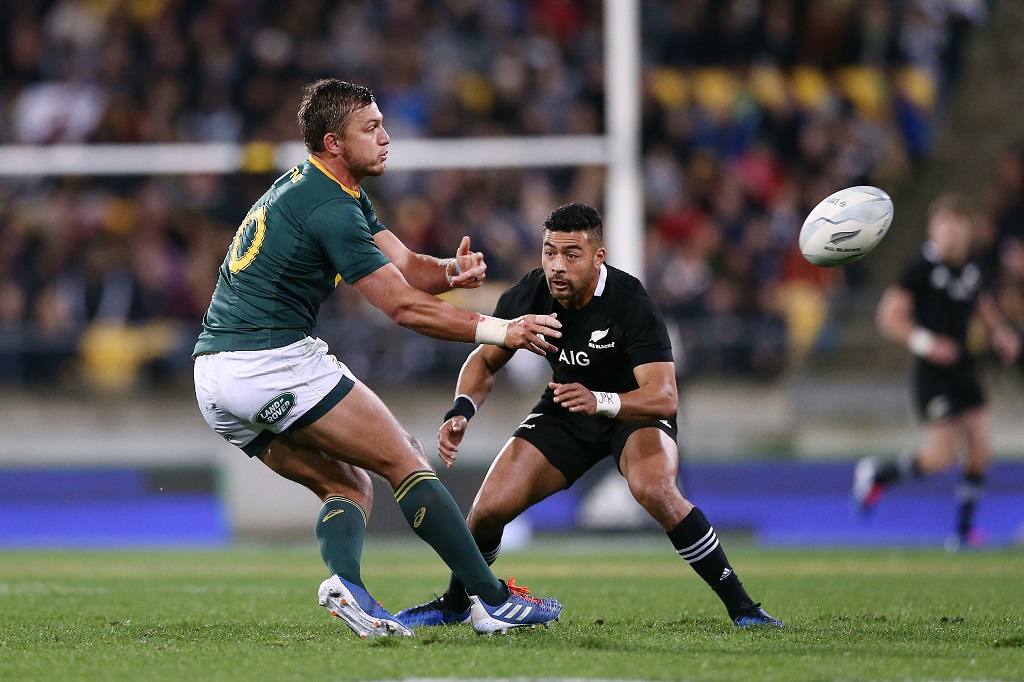 File: Handre Pollard of the Springboks makes a pass against Richie Mo'unga of the All Blacks during the 2019 Rugby Championship Test Match between New Zealand and South Africa at Westpac Stadium on July 27, 2019 in Wellington, New Zealand.

The Springboks round off their participation in the group stages of the Rugby World Cup with a match against Canada.

It should be a relatively routine outing for the South Africans in Kobe City and it’s also a quick turnaround for them having played on Friday as well. While they might have appreciated a slighter tougher task to sharpen them up for the knockout stages it does provide them with the chance to keep building confidence with a good win.

With the thinking that this might be a high-scoring encounter, you can get 6/10 on the second half being the highest scoring half or 13/10 for the first half.

There’s some 14/10 on a lineout being the first stoppage in play. and 5/2 on a penalty or free kick causing the first break in play. The same price can be had for a scrum.

There’s not too much history between these two teams with only two Tests played between them. The Springboks have come out on top in both with a 51-18 win back in 2000 being the most recent encounter.

Before that was the 1995 Rugby World Cup meeting that the Boks won 20-0 but that match was remembered for the antics on the field that saw James Dalton earn infamy for his part in a brawl that led to a litany of red cards.

You can get 7/1 on a red card being dished out in this match.

There’s 9/10 for the numbers players who like to speculate on the half time or match totals with that price offered for either odd or even number points hauls.

South Africa are all set to advance to the quarter-finals where a fixture against hosts Japan awaits. With that in mind, coach Rassie Erasmus will want his side to get things right in this tune up against Canada.

For a full range of betting options available on this match then click here.