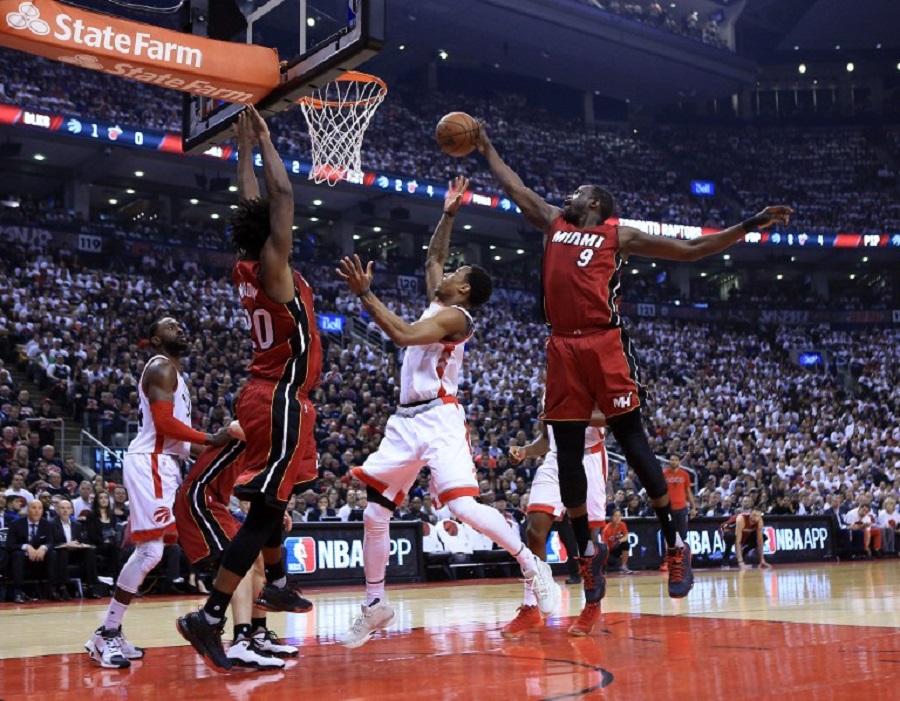 DeMar DeRozan 10 of the Toronto Raptors drives to the basket as Justice Winslow 20 and Luol Deng 9 of the Miami Heat defend in Game Seven of the Eastern Conference Quarterfinals during the 2016 NBA Playoffs at the Air Canada Centre 15 May 2016.

LOS ANGELES - Sudanese-born British forward Luol Deng has agreed to a four-year NBA free agent deal worth $72-million (more than R1-billion) ) with the Los Angeles Lakers, according to multiple media reports on Saturday.

Players and teams can come to terms on free agent agreements but no deals can be signed until Thursday, leaving reports unconfirmed and deals incomplete until then.

He joined the Lakers after talks with Washington and Utah.

"Congrts my brother," tweeted Miami star guard Dwayne Wade. "Now you can afford your own @stance socks..One of my all time favourite teammates. Proud to call you a friend!"

Deng, 31, spent time at small forward and power forward for the Heat last season after Chris Bosh was lost for the season in February with blood clots. Deng joined Miami in 2014 to replace LeBron James when the superstar playmaker left for Cleveland.

In 12 NBA seasons Deng has averaged 15.5 points, 6.2 rebounds and 2.4 assists for Chicago, Cleveland and Miami.

Terms were finalised late on Friday on Joakim Noah&39;s four-year deal for $72-million with the New York Knicks. Noah posted a photo on Instagram of himself wearing a Knicks cap, accompanied by the message "Jah bless".

A photo posted by Joakim Noah (@stickity13) on