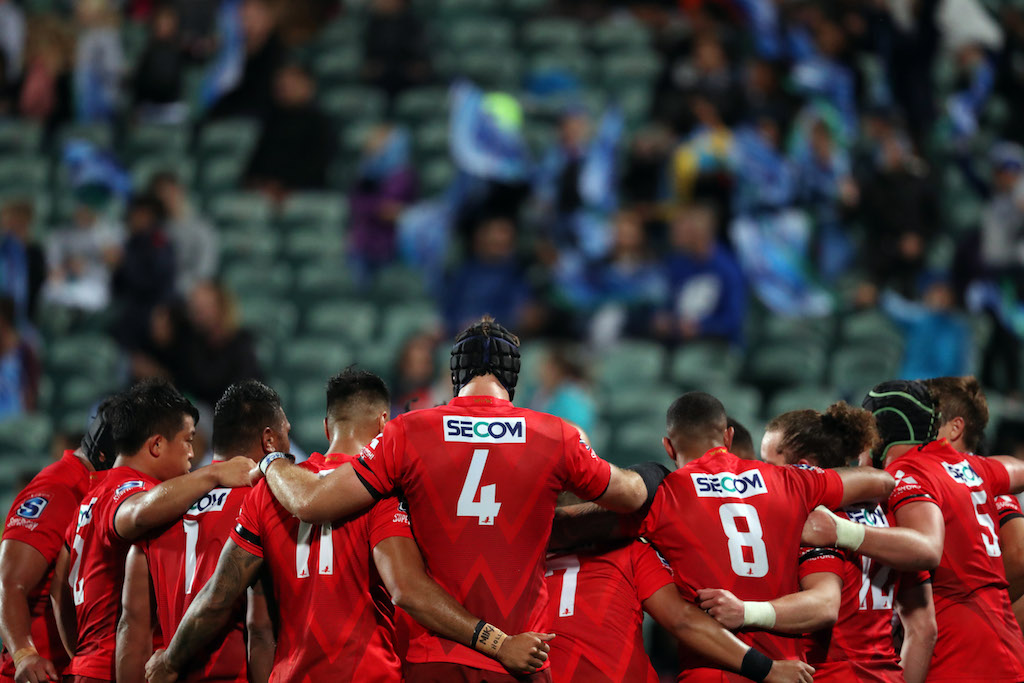 Sunwolves players come together for a team huddle during the Super Rugby match against New Zealand's Blues.

MELBOURNE - The Tokyo-based Sunwolves will be cut from Super Rugby after the 2020 season, southern hemisphere governing body SANZAAR confirmed on Friday, in a major blow for Japan as the nation prepares to host the World Cup.

Super Rugby will revert back to a purely southern hemisphere affair of 14 teams in a round-robin format, continuing the competition's contraction since an ill-fated expansion to 18 sides in 2016.

"The decision to further consolidate the competition format to a 14-team round robin was not taken lightly," SANZAAR CEO Andy Marinos said in a statement.

"It has involved some detailed analysis and a thorough review of the current and future rugby landscape, tournament costs, commercial and broadcast considerations and player welfare in line with our Strategic Plan."

The timing could not be worse for the game's global governing body World Rugby as it preaches a message of inclusion for emerging rugby nations ahead of the World Cup that starts in September.

The Sunwolves had struggled to be competitive in a tournament featuring mostly established South African, New Zealand and Australian sides, but they gradually improved and won their first away match in New Zealand earlier this month.

Marinos put the blame for the team's demise at the Japan Rugby Football Union's (JRFU) door.

He said the JRFU had told SANZAAR in early March that "they would no longer be in a position to financially underwrite" the team post-2020.

"The future of the Sunwolves will now be determined by the JRFU which has determined that Super Rugby no longer remains the best pathway for the development of players for the national team," Marinos said.

He added that SANZAAR had presented the option of the establishment of a Super Rugby Asia-Pacific competition which would include Japan, the Pacific Islands, North and South America and Hong Kong.

"The aim is to deliver a competitive and sustainable international pathway that can align to both current and future considerations around the international calendar," Marinos said.

The Sunwolves were created after the Japanese Rugby Football Union beat a rival bid from Singapore to launch one of three expansion sides in Super Rugby.

They joined in 2016 amid a wave of optimism following Japan's encouraging performance at the 2015 World Cup in England.

SANZAAR bosses hailed the team's entry as a landmark in the development of rugby in Asia, while the JRFU said the team would provide another pathway for home players and inspire more locals to take up the game.