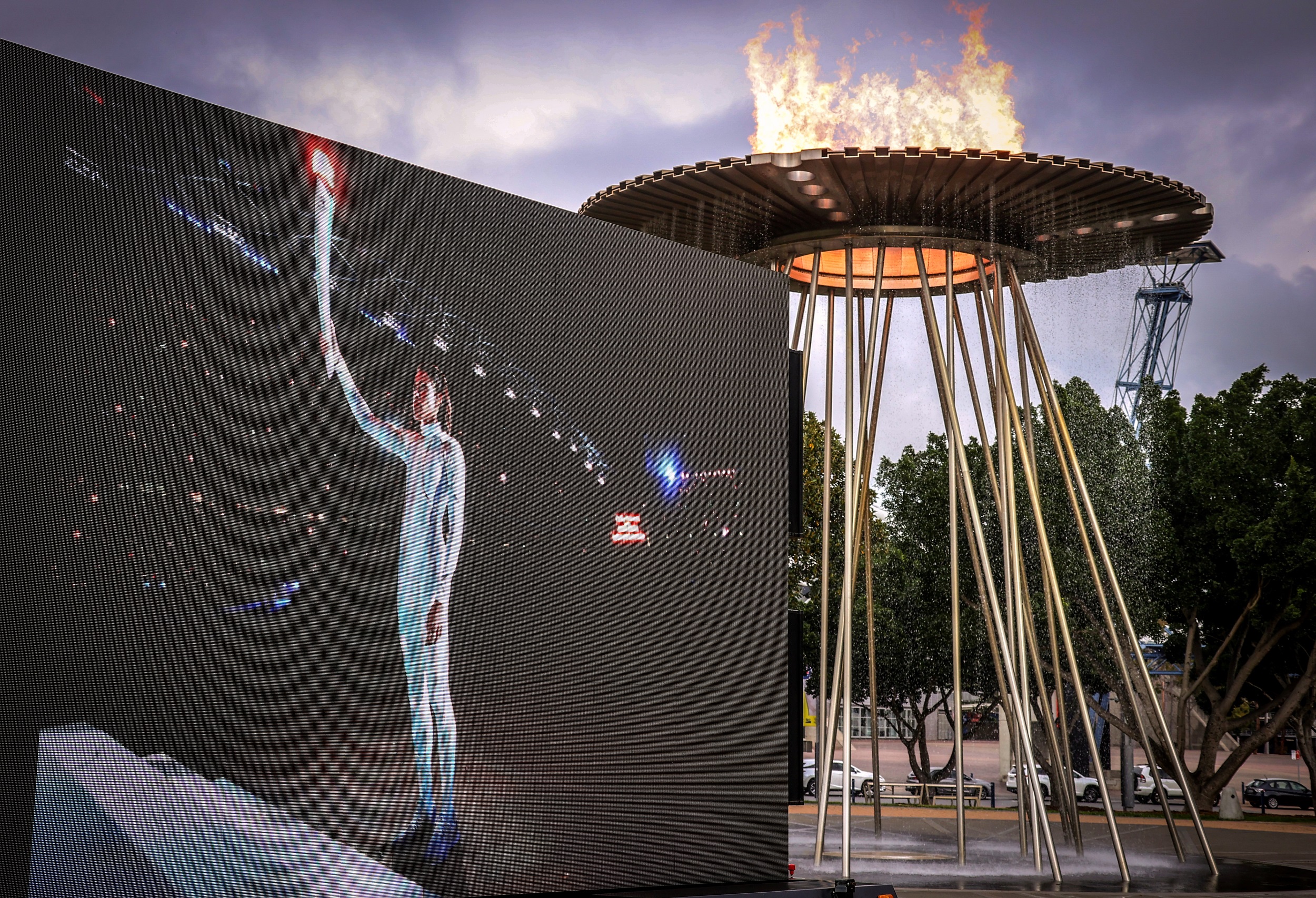 Former Australian Olympian Cathy Freeman is seen on a screen from the Sydney 2000 Olympic Games, as the cauldron (R) is re-lit during an event to mark the 20th anniversary of the opening ceremony.

SYDNEY - Sydney lit its Olympic cauldron for the first time since 2000 but the face of those millennium Games, Cathy Freeman, was missing because of the coronavirus pandemic which loomed large over the celebrations.

The images that flashed around the world exactly 20 years ago of Freeman, who went on to win 400 metres gold, lighting the cauldron to open the Sydney 2000 Olympic Games in front of 110,000 people seemed a world away from the 20th-anniversary event in the quiet surrounds of the city's Olympic Park.

"It's at times like this that I reflect and I ponder the power of sport and the difference that sport can make in all of our lives," Freeman said in a message recorded from lockdown hundreds of kilometres away in Melbourne, Australia's second-biggest city.

Two young athletes, Tenayah Logan and Tamsin Colley, instead symbolically carried Olympic torches to the foot of the cauldron which is now mounted high off the ground in a park named after Freeman.

The message of hope captured in the "surreal and just simply magnificent" opening ceremony was still powerful, Freeman said.

"I am very proud of the fact that when I lit the cauldron all those years ago, it was a symbol of hope for all young Australians."

Freeman wore a signature bodysuit to race into Australian legend by winning gold, draping both an Aboriginal and an Australian flag over her shoulders during her victory lap of honour.

In a country still reckoning with its colonial past, that image remains a powerful symbol of reconciliation two decades on.

The man who chose Freeman to light the flame, International Olympic Committee vice-president John Coates, is now focused on organising the postponed Tokyo Games — echoing his commitment to hold them "with or without COVID" next year.

READ: Next year's Olympics will be cancelled if pandemic not over: Games chief

"We're proceeding on the basis that it's to go ahead with COVID," Coates, who is also the Australian Olympic Committee President, told media.

In a landmark decision, the 2020 Olympics were postponed because of the global march of the pandemic and they are now set to open on 23 July 2021.

Officials are still working through the impact of the pandemic on ceremonies, crowds and required quarantine measures, he said.