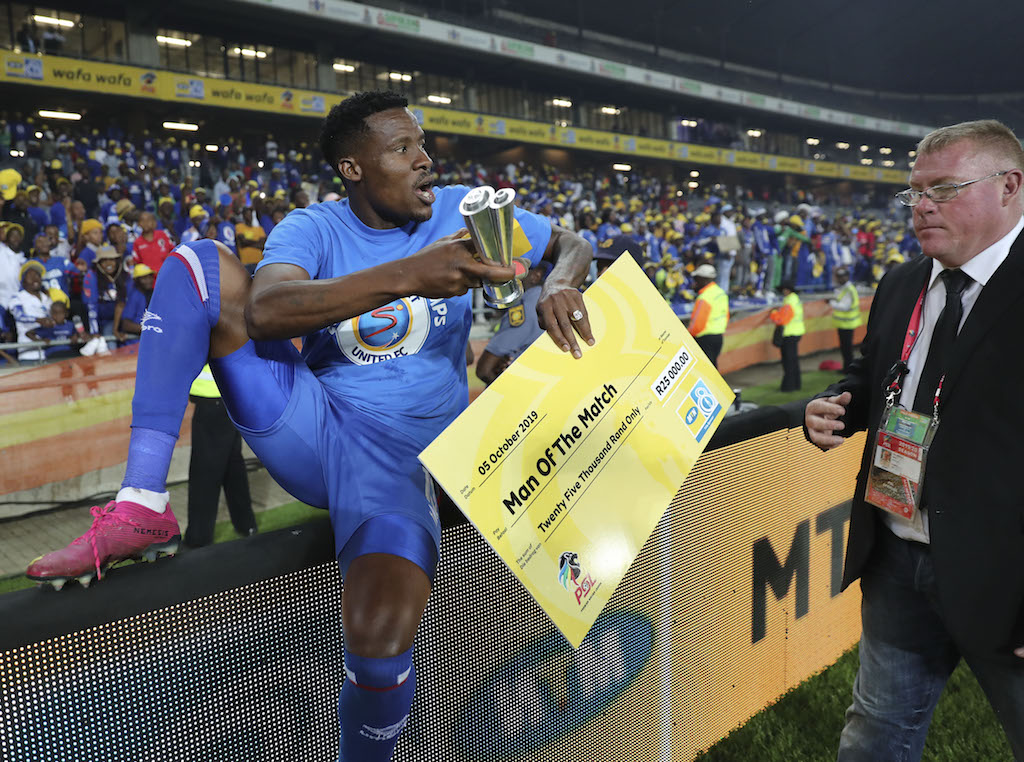 Thamsanqa Gabuza of Supersport United celebrates during the MTN8 2019 Final football match between Highlands Park and SuperSport United at Orlando Stadium on 05 October 2019.

JOHANNESBURG - Kaitano Tembo lifted his first trophy as a head coach after SuperSport United were crowned MTN8 champions on Saturday at Orlando Stadium.

United narrowly edged Highlands Park 1-0 thanks to a first-half header by Bradley Grobler.

Tembo dedicated the win and the cup to striker Thamsanqa Gabuza, describing him as a warrior and a hard worker who worked hard since joined United at the start of the season.

"I think I am a little bit emotional but not because of the game but the sad news I heard after the game. There is something that Gabuza did that I didn't expect him to do and I don't encourage him to do that. But he did it for the badge and for the team," Tembo said.

"For me it just killed everything, I see someone who is committed, who a lot of players can learn from him. For someone to play like that at the back of what happened I dedicate this cup to him."

Matsatsantsa A Pitori needed it the most having lost it in the finals last season to Cape Town City.

They have appeared in the MTN8 final three times consecutively.

Tembo also reckons Highlands could have buried the game in the first stanza but given another credit to his goalkeeper for keeping them in the game.

"I think Highlands dominated us in the first ten minutes of the game but Ronwen Williams kept us in the game with that brilliant save and that's why I believe he is Bafana's number one goalkeeper."

The Tshwane base side club have now lifted the MTN8 three times following their victories in 2004, 2017 and 2019, making it the third most successful team to win the competition.

While the Soweto giants Kaizer Chiefs and Orlando Pirates have won it 15 and 9 times respectively.