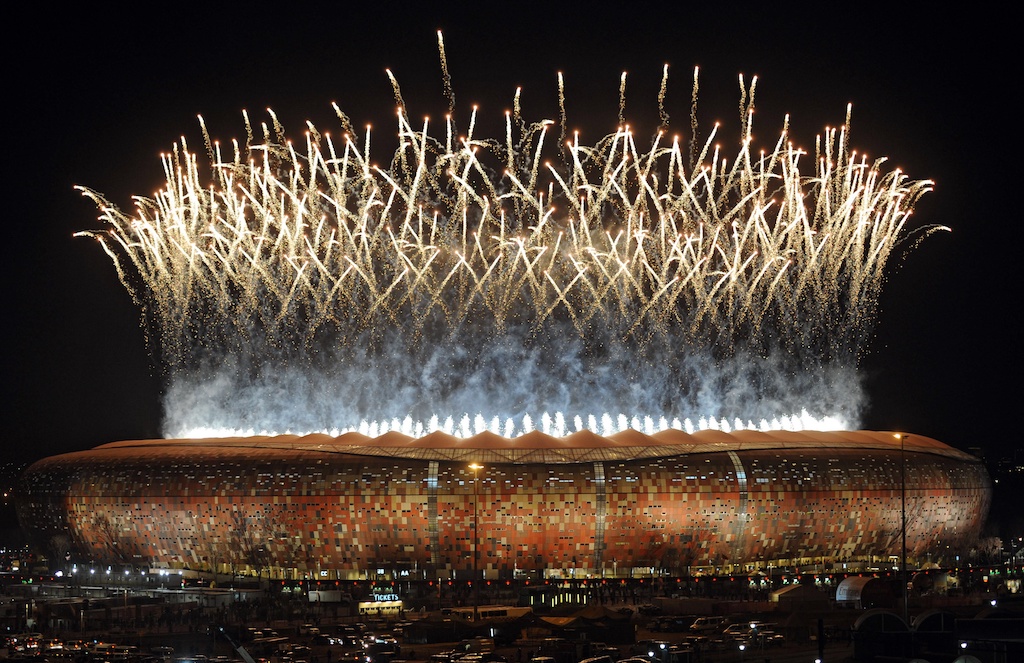 File: Fireworks light up the sky over Soccer City stadium in Soweto, in suburban Johannesburg after the 2010 World Cup football final between the Netherlands and Spain on July 11, 2010.

JOHANNESBURG - This Thursday marks the 10th anniversary of South Africa hosting the World Cup, the first and only time Africa staged the biggest single-sport global tournament.

A decade on, the report card about football in the republic is mixed with successes including a thriving national league and multi-sport use of virtually all the World Cup stadiums.

Negatives include a poorly performing national team, the absence of South Africans from four of the five major European leagues and a national association beset by personality clashes.

Here, AFP Sport looks at five successes and failures of South Africa 10 years after drawing with Mexico in the opening game and subsequently becoming the first hosts not to reach the last 16.

Formed in 1996 with Briton Trevor Phillips the first chief executive, the league left behind decades of maladministration with allegations that some clubs were "run from boots of cars".

The highlights of each season are matches between 50-year Soweto rivals Kaizer Chiefs and Orlando Pirates, who woo 90,000 crowds to FNB Stadium, where Spain won the World Cup final.

Clubs are paid a R2.5-million monthly grant and the league and three annual knockout competitions offer a combined R34.5-million rand in first prizes.

Unlike most African countries, the national body does not run all football with the Premiership and second-tier GladAfrica Championship separately organised.

While the smoothly-operated leagues attract little negative publicity, the same cannot be said of SAFA, with Jordaan often criticised for running it like a "personal fiefdom".

Former top official Dennis Mumble says Jordaan is obsessed by Khoza: "He will walk down the street, stub his toe on a rock, and blame Irvin for the rock (being) in the road."

Fears that many of the 10 World Cup venues would quickly become 'white elephants' have not been realised with nine used regularly for football or rugby.

The exception is the Royal Bafokeng Sport Palace, a 45,000-seat stadium in northwestern town Rustenburg, where England played 10 years ago.

When Platinum Stars were relegated from the Premiership, then sold and moved to Cape Town, the ground was left tenant-less and has not secured a replacement.

Apart from occasional inspired performances, like stunning hosts Egypt in an Africa Cup of Nations last-16 clash last year, the national team have become an embarrassment.

Bafana Bafana are ranked only 13th in Africa, failed to qualify for the 2014 and 2018 World Cups and were notable absentees from two of the last five Cup of Nations.

"I do not understand why the national team is not that good because the national league is among the best in Africa," retired Cameroon superstar Samuel Eto'o told AFP last year.

Ahead of the 2010 World Cup, a capacity 90,000 crowd watched South Africa defeat Colombia in a friendly, now the national side struggles to draw 5,000 to even competitive fixtures.

A clear sign of the decline of South African football is the fact that no star from the republic plays for an English, German, Italian or Spanish top-flight club.

France is the only top-five league in Europe where South Africans feature and the number dwindled when Amiens, the club of midfielder Bongani Zungu, were recently relegated.

It is a far cry from a few decades ago when centreback Lucas Radebe captained then Premier League side Leeds United.