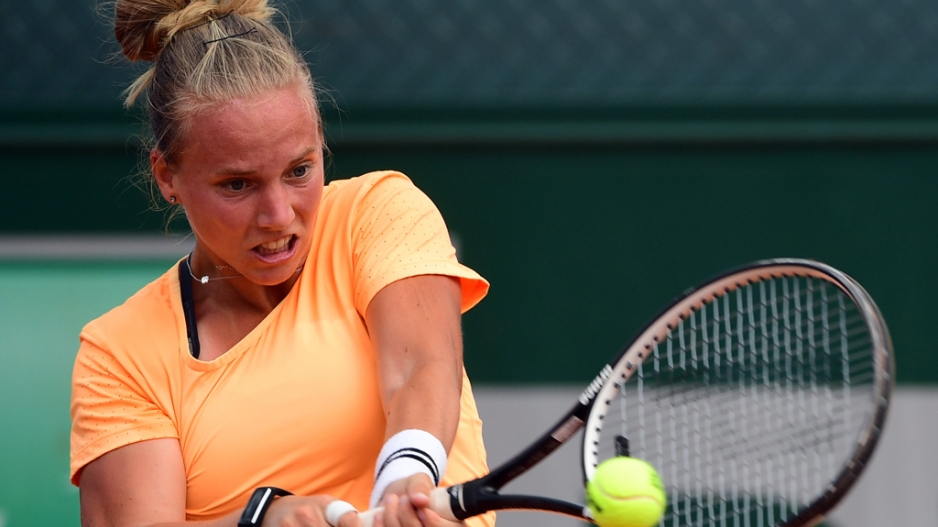 Richel Hogenkamp of the Netherlands in action against Jelena Jankovic of Serbia during their womens 1st round single match during the French Open tennis tournament at Roland Garros in Paris, France, 29 May 2017.

PARIS - Richel Hogenkamp, one of the few openly gay players in tennis, wants the Australian Open to take Margaret Court's name off one of its stadiums in protest at the Grand Slam legend's controversial views on homosexuality.

Court recently announced she will stop flying with Australian carrier Qantas "where possible" in protest of the airline's support of same-sex marriage.

"I am disappointed that Qantas has become an active promoter for same-sex marriage," said the 24-time Grand Slam champion, now a Christian pastor.

Hogenkamp, speaking at Roland Garros on Monday, said that Australian Open organisers should consider removing Court's name from the Melbourne venue where the first Grand Slam event of the season takes place in January.

"I don't think you should be that outspoken. I have a girlfriend myself. I don't agree with what she's saying," said the 25-year-old, world number 105 Dutchwoman.

"So I think it would be a good thing to see if Australian Open can maybe change the name of the stadium, because I think if you're in that kind of position, maybe some players they don't feel so comfortable playing in a stadium named after Margaret Court.

"I see that many players comment against her. So, if many players stand behind it, I think maybe something can change. Who knows."

Tennis great Martina Navratilova said that the arena should be renamed.

There have been suggestions that some players may even refuse to play in the stadium at the 2018 Australian Open if the Court name is not removed.

However, Australia's Samantha Stosur, the 2011 US Open champion, said she doubted if organisers would take such a controversial step.

"I find it very hard to believe that it would ever be changed, but the court's named Margaret Court Arena because of what she did in tennis," said Stosur, also speaking in Paris on Monday.

"I think everyone can have their opinion. I don't agree with it, but I guess we'll cross that bridge when we all get down to the Australian Open next year and who wants to play on Margaret Court Arena and who doesn't and we'll go from there."

Stosur has already gone public with her support for compatriot Casey Dellacqua, a fellow player who has a child with her partner, Amanda Judd.

"It's been pretty fiery. I don't agree with Margaret's opinion. That's why I wanted to support my friend and that's why I sent out my first tweet in a very long time," added Stosur.

"I think we definitely should have it in Australia (same-sex marriage). I just was trying to show support for my friend."