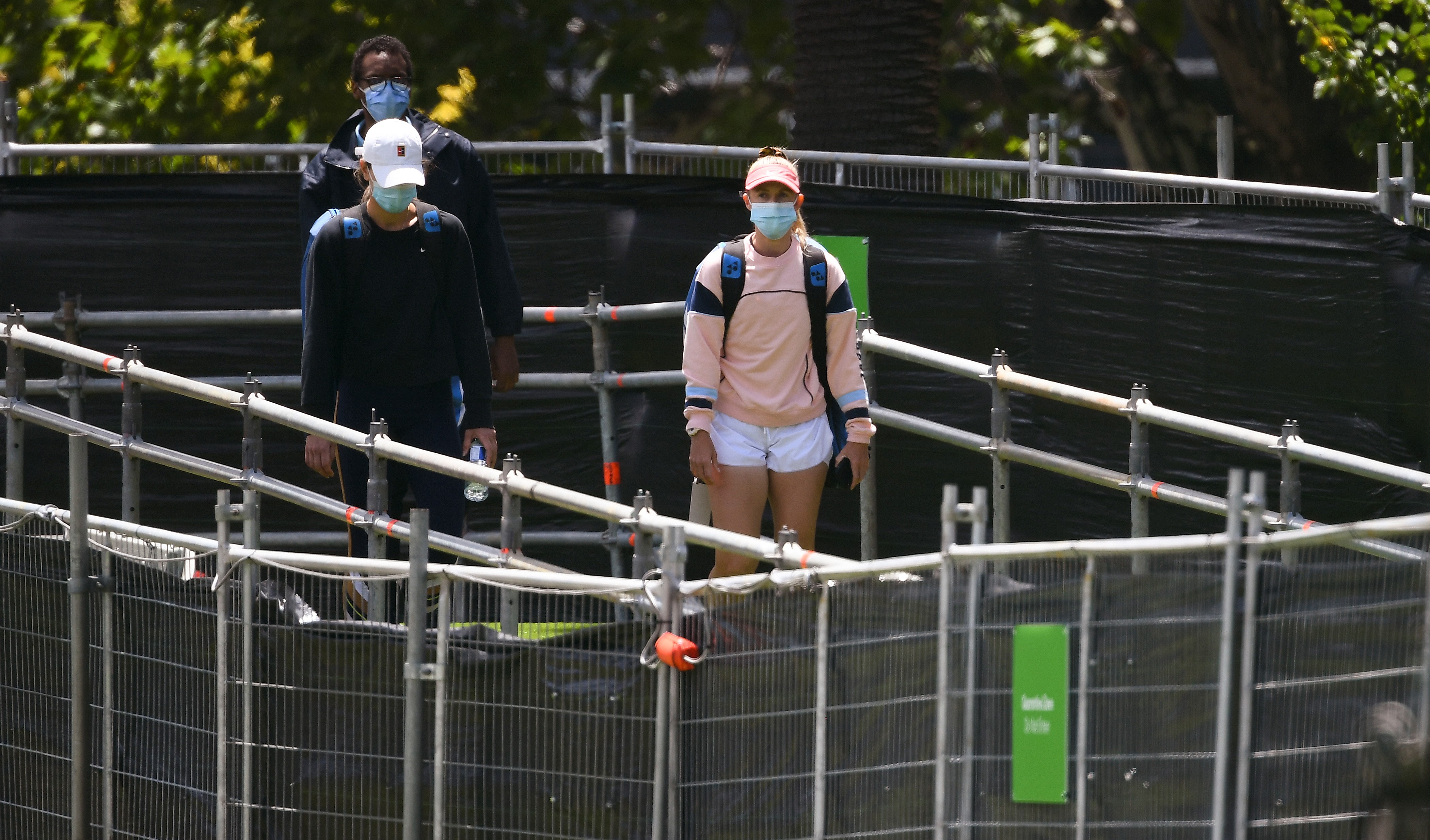 Australian tennis player Storm Sanders (C) returns to her hotel via a secure walkway after a training session in Melbourne on January 19, 2021, as players train while quaratining for two weeks ahead of the Australian Open tennis tournament. William West/AFP

MELBOURNE - Two Australian Open tennis players have tested positive for the coronavirus, health officials said on Tuesday, in a new blow for the tournament which is facing a backlash from a wary public.

The unnamed players were among three new cases -- a woman in her 20s and two men in their 30s -- taking the tournament's cluster to seven, Victoria state's health authority said.

More than 1,000 players and staff are in quarantine after arriving last week in Australia, which is largely coronavirus-free. Three of the 17 charter flights had positive cases on board.

The delayed Grand Slam has proved an enormous undertaking and is provoking disquiet among Australians, especially in host city Melbourne which emerged from a four-month lockdown in October.

"Djokovic is a tool," tweeted Kyrgios, the world number 47.

World number 13 Roberto Bautista Agut also told a TV station that quarantine was like prison "with wifi", calling the arrangements a "complete disaster".

However, tournament organisers insisted most players accepted their isolation without complaint.

"Actually embarrassed to be a tennis player these days," tweeted Australia's Arina Rodionova, while two-time Australian Open winner Viktoria Azarenka asked her fellow competitors for "cooperation, understanding and empathy for the local community".

At least 72 players have been barred from leaving their rooms for two weeks after cases were detected on their charter flights.

The others can train for up to five hours a day under strictly controlled conditions. A series of warm-up events will be held after the quarantine period, before the Australian Open starts on February 8.

Djokovic, the reigning Australian Open champion, is among a select group of stars -- including Serena Williams, Naomi Osaka and Rafael Nadal -- flown into Adelaide to enjoy better facilities such as hotel rooms with balconies, unlike the majority quarantining in Melbourne.

The 17-time Grand Slam champion sent a letter to Tennis Australia that reportedly called for players to be moved into private homes with tennis courts and get better meals, among other requests.

Australian media portrayed the letter as petulant and selfish, while showing images of Djokovic not wearing a mask in a players' minibus, which would be required in most taxis and ride-shares in Australia.

Tiley said Australia's strict quarantine rules were initially a "shock" to some players but most had told him during a conference call that they accepted the restrictions and wanted to apologise for the comments of a disgruntled few.

"The majority of the players have been absolutely fantastic and this is a playing group that's a little bit upset with what some others have said because it holds them in a bad light in the community," Tiley told reporters.

He also ruled out cutting the maximum duration of men's matches from five sets to three to help players whose preparation had been compromised by quarantine lockdown.

"We haven't entertained those comments or that position," he said.

Meanwhile Kyrgios also took aim at fellow Australian player Bernard Tomic's girlfriend, Vanessa Sierra, after she complained in an online video about cold food and having to wash her own hair in quarantine.

"I don't mind Bernie but his Mrs obviously has no perspective, ridiculous scenes," Kyrgios tweeted.

Djokovic's actions around the tournament are being closely watched, in part due to his seeming nonchalance about the virus in the past.

Last year, he organised a series of exhibition events in the Balkans at which social distancing was minimal.

He and several other players later tested positive for the virus, as well as his wife Jelena.