Use your noodle: brain teasers tune Japan for Boks clash 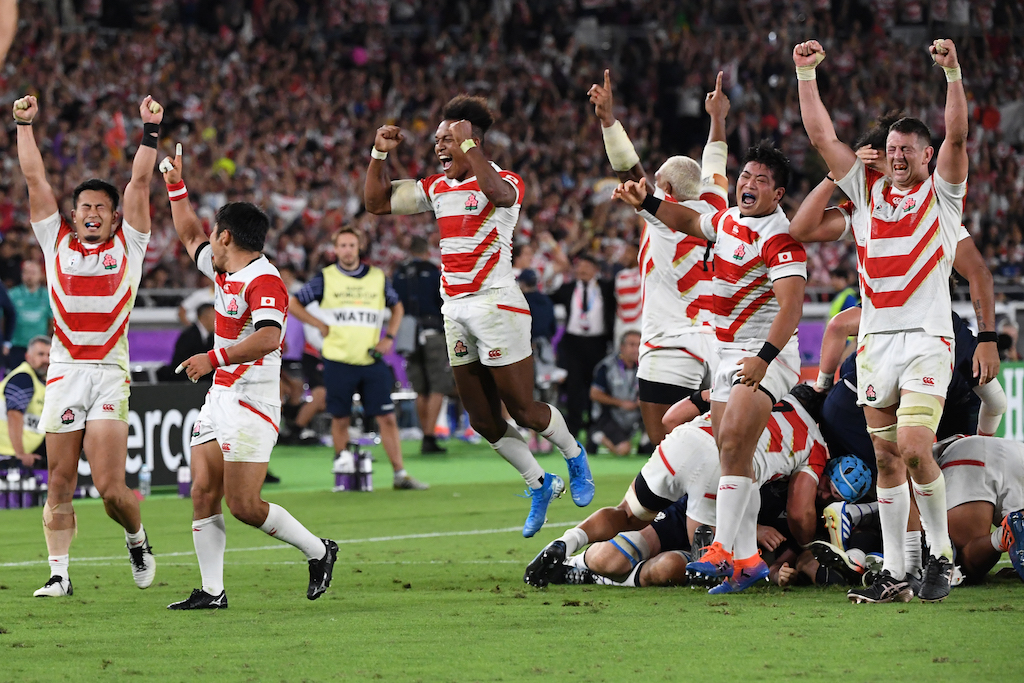 File: Japan's players celebrate winning the Japan 2019 Rugby World Cup Pool A match between Japan and Scotland at the International Stadium Yokohama in Yokohama on October 13, 2019.

TOKYO - Oscar Wilde once said: "Rugby is a good occasion for keeping thirty bullies far from the centre of the city."

But World Cup hosts Japan are adopting a more cerebral approach to the "hooligan's game" - using daily brain teasers to get their neurons firing as they plot their giant-killing antics.

In the build-up to this weekend's quarter-final against two-time world champions South Africa, hooker Atsushi Sakate revealed that Japan coach Jamie Joseph has his players solve puzzles as a way to stimulate the grey matter.

READ: Boks block out 2015 nightmare as they prepare for Japan

"The coaches write these brain teasers on a whiteboard for us to think about at the gym," Sakate told reporters Wednesday.

"It's supposed to help us use our brains while we're lifting weights or when we face tough moments in training or even games."

Japan's Brave Blossoms have made history after beating Russia, Ireland, Samoa and Scotland to reach the World Cup knockout phase for the first time.

Kenki Fukuoka, who scored Japan's try in the 19-12 upset over Ireland, plays the piano to relax between games - an activity linked to sharper reflexes and decision-making.

It was perhaps little surprise then that Sakate identified the fleet-footed winger as Japan's brainiest player when it came to solving the whiteboard problems, with a respectful nod to giant lock Wimpie van der Walt and winger Lomano Lemeki.

"Kenki is the smartest one among us," he said.

"He always figures out the answers quickest - but Wimpie and Lomano are pretty good at it too. The rest of us are always asking those guys for hints.

"It's hard to explain the benefits in concrete terms," added Sakate. "But it helps us keep calm and to communicate clearly and solve problems that arise during matches."

Japan famously stunned South Africa 34-32 in their opening fixture of the 2015 World Cup under Eddie Jones, who introduced mental coaches to the Brave Blossoms set-up.

The Springboks crushed the Japanese 41-7 in a World Cup warm-up last month and will go into Sunday's quarter-final in Tokyo as favourites to end the host side's fairytale run.

But Tongan-born lock Uwe Helu warned that Japan were a different beast now after sweeping to top spot in Pool A and achieving their target of a place in knockout stages.

READ: Konnichiwa Springboks! How to support the Boks in Japanese

"We already reached our goal - no one expected us to make the top eight," he shrugged.

"No one will look at us to beat South Africa either, but we'll have a few tricks this weekend - it's another chance to prove people wrong."

Utility back Ryohei Yamanaka, whose 2011 World Cup dreams were dashed after he was banned for using a hair-growth cream to try to grow a moustache which contained an illegal substance, insisted Japan could spring another shock.

"Obviously we have no experience of being in a World Cup quarter-final," he said.

"But we're ready to go. We have nothing to lose, we just have to go out and give everything we have."