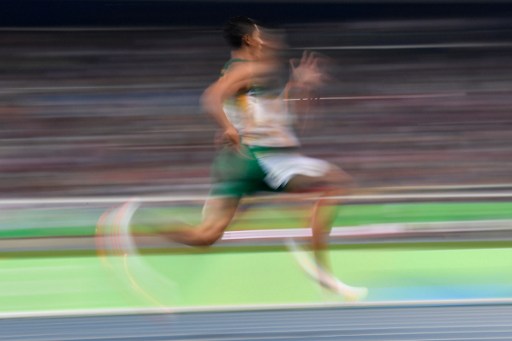 South Africa's Wayde van Niekerk competes to win the Men's 400m final during the athletics event at the Rio 2016 Olympic Games at the Olympic Stadium in Rio de Janeiro on August 14, 2016.

JOHANNESBURG - Despite being the fastest man ever over 400m, South African Wayde van Niekerk believes he can still go faster.

With his gold medal-winning run in the Rio Olympics, Van Niekerk also broke the world record with a time of 43.03 seconds in August 2016. The effort eclipsed the previous world record which had stood for 17 years, set by American Michael Johnson in Spain, 1999.

South Africa's Wayde van Niekerk holds his gold medal during the podium ceremony for the men's 400m during the athletics event at the Rio 2016 Olympic Game. Credit: AFP

“Well I’m always someone that loves living in the moment. I’m not someone that necessary likes counting my chickens before they hatch, but at the age of 24, achieving a record that’s been there forever … you still feel that you’ve got so much more to prove,” said Van Niekerk.

So like I'll be doing the 100 and 200 meters at South African Champions. I hope your ready for this --

“I feel that like it’s really, the beginning of so much I can do as athlete, so why not believe in getting that sub-43 but at the same time, it’s going to take even more hard work and discipline but I believe I can, why not?”

Van Niekerk is also the only person to have ever run sub-10 for the 100m, sub-20 for the 200m and sub-44 for the 400m. Despite the growing list of accolades in a career that is still only in its infancy, Van Niekerk has never been one for the limelight.

“It gets a bit much for myself, all the attention, but I’ve immediately tried to teach myself to accept the responsibility. I like thinking I’m representing the people, I’m really just a boy going out there, training hard, each and every day.

“The same as the person who has to wake up every morning, going to work and working for their job, to achieve the best work on that day.

“That’s just me, I’m just representing the simple guy, like going out there, chasing a dream but at the same time, fortunately for myself, people get to see it on TV. I’m sure there are people who do massive things in their workplace but the world, doesn’t see it. I see myself as representation, the people’s person, I am representing you.”

Today, let's celebrate the positivity and progression in our country and be thankful. -------- #HumanRightsDay @Defy_SA pic.twitter.com/7z4wN3gCC3

“I would really love to but I’m sure, only time can tell. I’ll definitely put in the hard work, I would love to double, if there are opportunities there, I’ll take it. But at the same time, it’s gonna be quite a lot of hard work, but I’m ready for it because it’s gonna be the first time, I’ll ever double at a competition.”

When asked about role models, Van Niekerk did not mention the big names in the history of athletics, but instead gave a personal insight.

“Definitely, thinking of it, your mother will always have that extra special kinda love, that not even me as a son, can understand, but one should always appreciate it and cherish it. So, I’ll always go out of my way, to make my mother proud, to make her happy, to learn from what she has, to show me.

“Obviously I’ll give her full credit, for being the number one mum in the world. But ja, I really appreciate her in my life, I always wake up, in the morning thinking, it’s another opportunity to go out there and make my mum proud.”