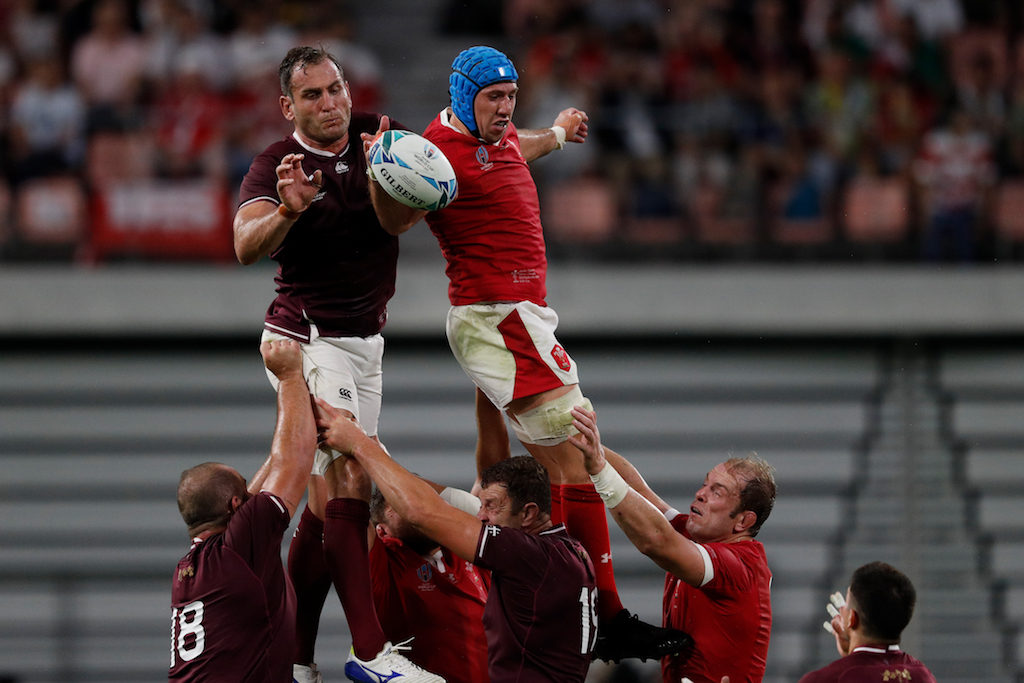 Georgia's lock Giorgi Nemsadze (L) and Wales' flanker Justin Tipuric jump for the ball in a line out during the Japan 2019 Rugby World Cup Pool D match at the City of Toyota Stadium in Toyota City on 23 September 2019.

The victory not only sent out a signal of intent to main Pool D rivals Australia, who beat Fiji in their opener, but also dispelled any doubts there might have been of a hangover in the Welsh camp over the sending-home of assistant coach Rob Howley amid allegations of illegal betting.

Four slick first-half tries from Jonathan Davies, Justin Tipuric, Josh Adams and Liam Williams ensured the bonus point for Wales, who were given a stern examination by a strong Georgian scrum that came to life in the seond period.

"It was a good first half for us and we were pretty happy at half-time," said Wales coach Warren Gatland.

"A little bit messy in the second half but the ball was quite slippery out there and it was hard to hold on to it. We scored a few nice tries and we're happy with the bonus point."

There were barely two minutes on the clock when centre Davies was played in under the posts after a rocket of a pass by scrum-half and namesake Gareth, decoys Dan Biggar and Hadleigh Parkes bamboozling a leaden-footed defence.

Biggar's conversion surprisingly came back off the posts, but the fly-half redeemed himself with a penalty shortly afterwards.

Another well-drilled midfield move saw winger Adams split the defence before offloading to Gareth Davies. The scrum-half was brought down short, but Tipuric was on hand to swoop for the ball and sidestep inside Giorgi Tkhilaishvili to run through unmolested for Wales' second try, Biggar converting.

The third came soon after, Adams running in from almost halfway after an inside Biggar pass off a lineout, with the Georgian defence glaringly absent.

Biggar hit the extras and it was a point a minute after 22 minutes, the 35,545-strong crowd at a sultry City of Toyota Stadium scenting a rout.

The sole bright spark for Georgia in a grim first-half display saw a rare break into Welsh territory by hooker Shalva Mamukashvili, Gareth Davies twice on hand with tapdowns to halt the foray.

Skipper Alun Wyn Jones, matching Gethin Jenkins' record of 129 Wales caps, and No 8 Josh Navidi were at the heart of the effective Welsh rush defence to nullify the threat from the 'Lelos'.

And it was instead Wales who had the last word of the first 40 minutes, Liam Williams scooping up Jonathan Davies' pass to dot down in the corner, Biggar making no mistake to stretch the score out to 29-0.

The Georgians opened the second-half exactly as coach Milton Haig would have liked them, hooker Mamukashvili bundled over from an attacking line-out for a well-received try that Tedo Abzhandadze converted.

Wales roared back with their own driving maul, but fresh-on-the-field Jaba Bregvadze manipulated it to a juddering halt, his dark art spotted by referee Luke Pearce who had no option but to yellow card to the replacement hooker.

A raft of replacements disrupted the flow of the game, enabling Georgia to weather the 10-minute sin-binning without conceding any points.

Despite their far more combative half, it was replacement scrum-half Tomos Williams who chased down a George North grubber for Wales' fifth.

Toulon prop Levan Chilachava responded Georgia when he bombed over from short range, but Wales had the last word when North finished well after some neat footwork and an offload from Tomos Williams.

"I think we came out of the box as we went out into the first half but I'm disappointed if I'm honest with the second half," said Jones.

"We let a couple of tries in and we didn't really continue in a similar vein. It's a good result but it's plenty to work on.