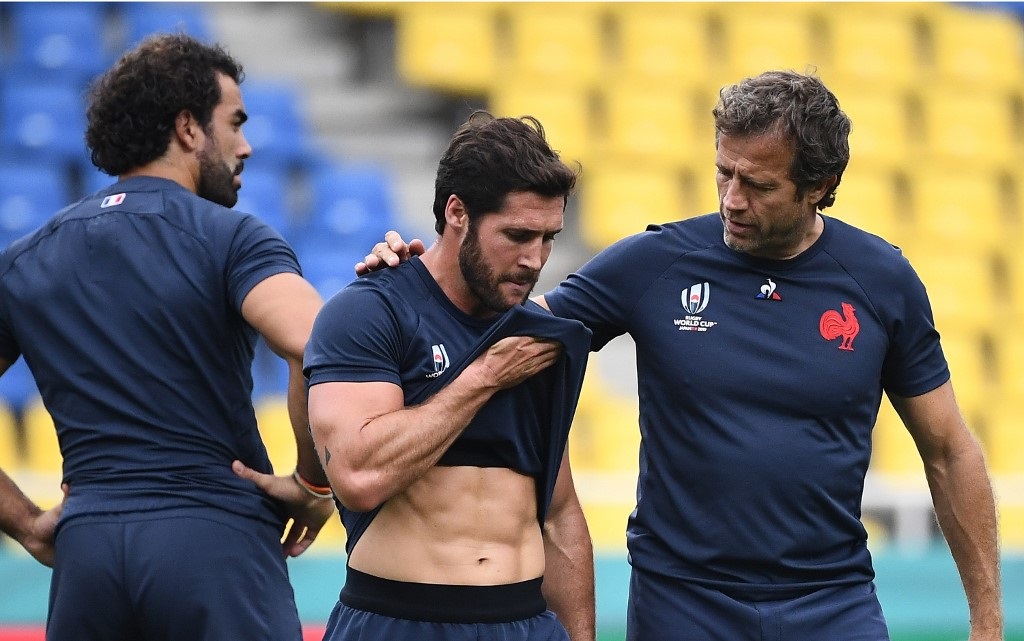 France's scrum half Maxime Machenaud (C) speaks with France's assistant coach Fabien Galthie (R) next to France's left wing Yoann Huget during a captain's run training session at the Hakatanomori Stadium in Fukuoka, on October 1, 2019, on the eve of their Japan 2019 Rugby World Cup Pool C match against the United States.

The quarter-final action at the Rugby World Cup continues on Sunday with the first of the day’s fixtures seeing Wales take on France in a battle of the Northern Hemisphere foes.

It seems fairly straightforward, Wales, who went through the Six Nations unbeaten, have a clear upper hand. The thing with the French is that you are never truly sure which team will arrive at the stadium on the day.

There hasn’t been much to suggest from the French performance that they are a side worth causing too much trouble for the Welsh although they should make it competitive for the most part. Wales on the other hand looked seriously good when battling on bravely to beat Australia in the pool stages. However, their performance in the final group stage match, a fixture that should have seen them blow the opposition away, was riddled with basic handling errors and they looked a way off from being World Champion material.

If you’re wanting to back the Half Time Result then you can get 4/7 on Wales and 16/10 on France after 40 minutes.

Wales have won seven of their last 10 meetings against France and were 24-19 victors when they met in the Six Nations back in February. Their World Cup history includes a closely fought semi-final clash in 2011, a low-scoring encounter that failed to deliver any real fireworks with France beating 14-man Wales 9-8.

It’s very hard to look past Wales for this crunch clash and they’ll be buoyed by the return of the likes of Dan Biggar. They might have looked a bit out of sorts last time out but there’s no doubt that coach Warren Gatland will have ironed out all the kinks for this one.

For a full range of betting options on this quarter-final between Wales and France then click here.