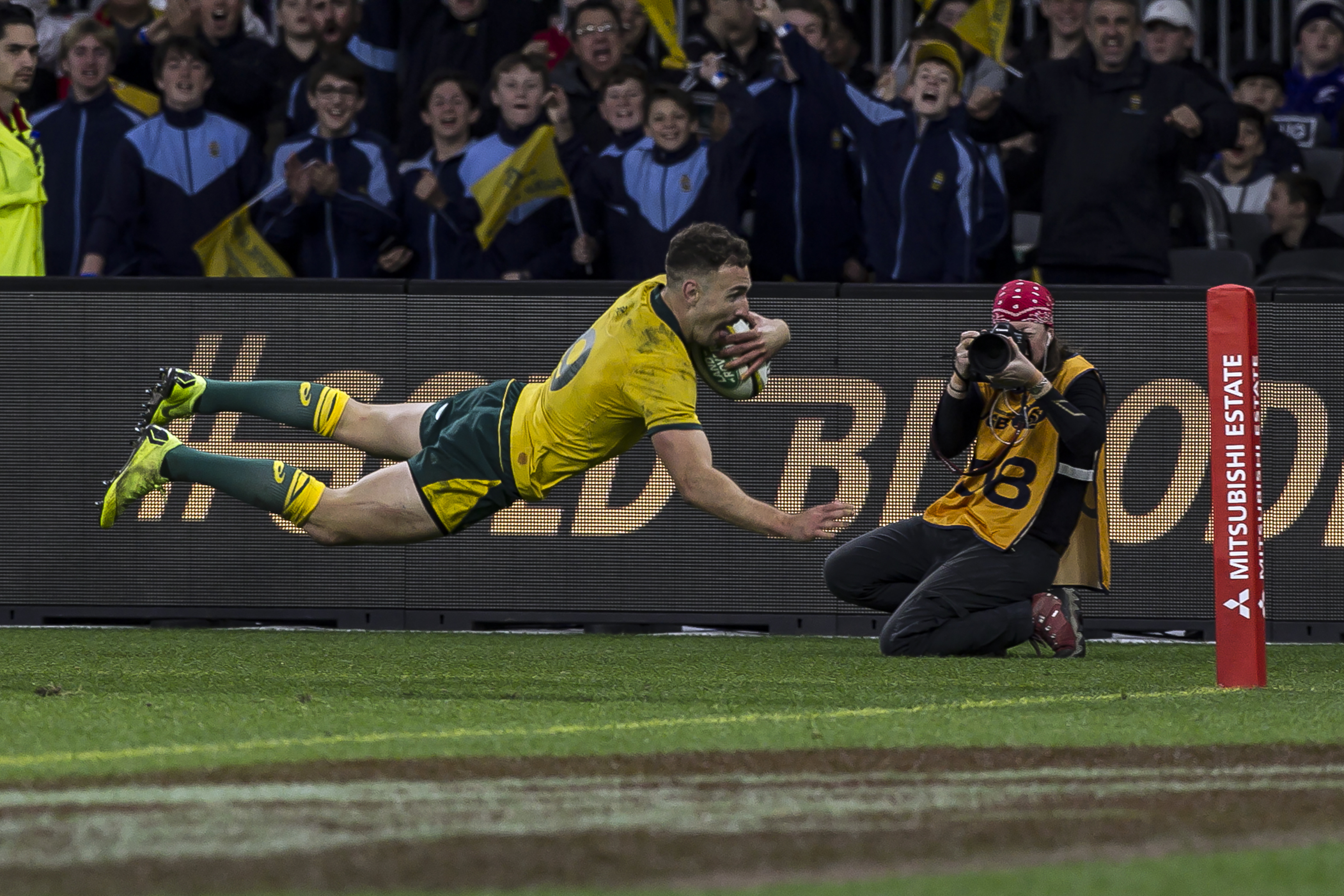 Australia’s Nic White scores a try during the Rugby Championship Bledisloe Cup Test match between the Australian Wallabies and New Zealand All Blacks in Perth on August 10, 2019.

PERTH - Australia scored a stunning 47-26 upset over a shellshocked New Zealand side reduced to 14 men in a pulsating Rugby Championship clash on Saturday for a major confidence boost ahead of the World Cup.

A power-packed All Blacks were widely tipped to retain a stranglehold over their trans-Tasman rivals in Perth, but a red card for Scott Barrett in the dying seconds of the first half for a dangerous shoulder charge made it an uphill battle.

He was only the fourth All Black ever to be sent off, with Sonny Bill Williams the last, against the British and Irish Lions in 2017.

New Zealand went to the break 16-12 behind and in a game that doubled as the opening Bledisloe Cup clash between the arch rivals, they never recovered.

It was a major blow ahead of their World Cup defence and follows a narrow 20-16 victory over the Pumas last month before a scrappy 16-16 draw against the Springboks two weeks ago, raising serious questions over their all-conquering dominance.

READ: Boks prove difficult to break down ahead of World Cup

All Blacks coach Steve Hanson tested positional combinations in their opening two Rugby Championship matches, but against Australia he reverted to what is considered close to his starting 15 for their first game of the World Cup in Japan next month.

But even before Barrett was sent packing, they struggled with ill discipline, giving away three penalties in the opening stanza, all converted by Christian Lealiifano, with Australia dominating possession and territory.

It didn't get better in the second half, with the Wallabies pressing their advantage with two early tries to rock the All Blacks' confidence and keep alive their hopes of getting their hands back on the Bledisloe Cup for the first time since 2002.

The trans-Tasman rivals play the return leg in Auckland next week.

The win is a huge boost for Australian coach Michael Cheika with his gamble in changing up the back-line paying off. A livewire Reece Hodge was a handful, James O'Connor, in his first start in six years, slotted in seamlessly and Lealiifano was his usual calm presence.

It gave Australia their first back-to-back victories in the Rugby Championship since 2016.

They threatened from the outset and the pressure paid off with a converted penalty after seven minutes.

Australia quickly raced 10-0 ahead with O'Connor sending a lovely one-handed off-load to Hodge who sprinted to the line for a try.

Rattled, the All Blacks hauled themselves into the game with Anton Lienert-Brown flopping onto a bouncing grubber kick to get their first points of the game.

And they snatched the lead on 16 minutes after a turnover, with Dane Coles making a break and Reiko Ioane punishing Australia by dotting down for his 23rd try.

But another converted penalty put Australia back on top before Barrett's clumsy shoulder charge caught Michael Hooper on the head and French referee Jerome Garces sent him off.

Tries from Nic White and Lukhan Salakaia-Loto within eight minutes of the re-start left New Zealand with a near impossible task.

They pegged one back through Beauden Barrett before Marika Koroibete powered over for another Australian five-pointer and Hodge then got his second.

Ngani Laumape got a consolation try, before Kurtely Beale rubbed salt in the wounds with the Wallabies' sixth try in the final minutes.