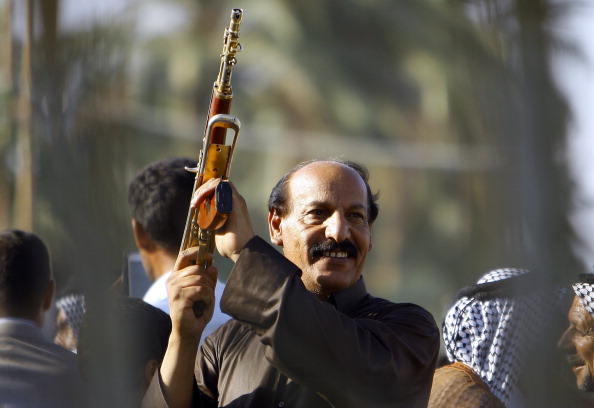 An Iraqi Shiite tribesman holds his weapon as men gather to shows their readiness to join Iraqi security forces in the fight against Jihadist militants who have taken over several northern Iraqi cities in the southern Shiite Muslim shrine city of Najaf.

The militants were beaten back from the village of Basheer, 15 km (9 miles) south of the city of Kirkuk after an hour of clashes with local militia and police forces.

The government of Shiite Prime Minister Nuri al-Maliki is seeking to repel the Sunni militants who have seized several cities over the past week.

Fighters from the Islamic State of Iraq and the Levant (ISIL) and other Sunni militants have swept through towns in the Tigris valley north of Baghdad in recent days but appeared to have halted their advance outside the capital on Sunday as they tightened their grip on the north.

ISIL&39;s advance may pose the biggest security crisis to Iraq since the worst of the sectarian bloodshed that followed the US-led invasion to oust Saddam Hussein in 2003.

Iraqi state news channel "Iraqiya" said that the army had killed two commanders from ISIL at an unspecified location in Iraq on Tuesday.