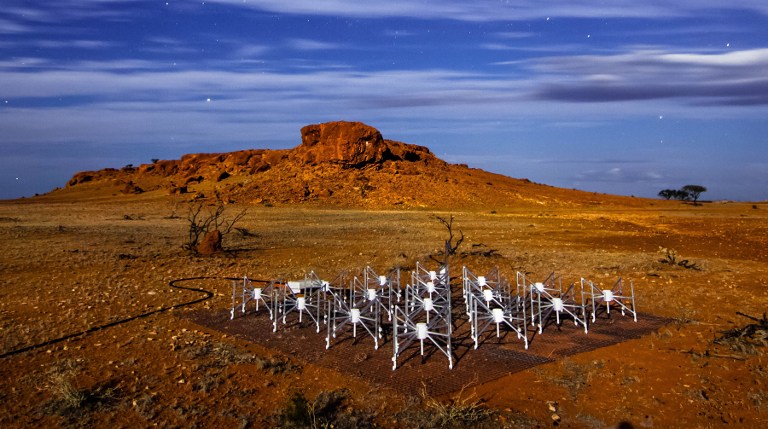 SYDNEY - Australia said it had taken a major step towards the ambitious Square Kilometre Array (SKA) astronomy project with the switching on Tuesday of a test telescope to explore the origins of the universe.
Innovation Minister Kim Carr said the Murchison Widefield Array (MWA), a low-frequency radio telescope operating at the remote Outback site that will host the SKA, began collecting its first data from Southern Hemisphere skies on Tuesday.
"This is an incredibly proud moment for Australia. The MWA is the first SKA precursor telescope to be completed and to become fully operational," said Carr.
"In addition to helping us see back to the origins of the universe, the array will also help us to understand the interaction between the earth and the sun, give early warning of destructive solar flares and study our galaxy and other galaxies."
Australia was jointly awarded the SKA contract with South Africa and New Zealand last year in a surprise multi-site decision. Construction is expected to start in 2016, with preliminary operations to be underway by 2020.
The SKA will use a forest of antennae, spread across remote terrain, to pick up radio signals from cosmic phenomena that cannot be detected by optical telescopes.
It will have a discovery potential 10,000 times greater than the most advanced modern instruments and will explore exploding stars, black holes, dark energy and traces of the universe&39;s origins some 14 billion years ago.
Philip Diamond, director-general of the 20-nation SKA consortium,  said the MWA was an important radio telescope in its own right.
"It will also be a key precursor in the design and development of the SKA&39;s Low Frequency Array, to be hosted here in Australia," said Diamond.
The MWA will explore the so-called "cosmic dawn", when the first stars and galaxies formed in the early universe, as well as "space weather" including solar bursts.
It consists of 2,048 dipole antennae, arranged into 128 "tile" clusters, about 100 kilometres west of Meekathara in the deep radio silence of Australia&39;s remote red-sand desert.