A brief (brutal) history of the Rooivalk 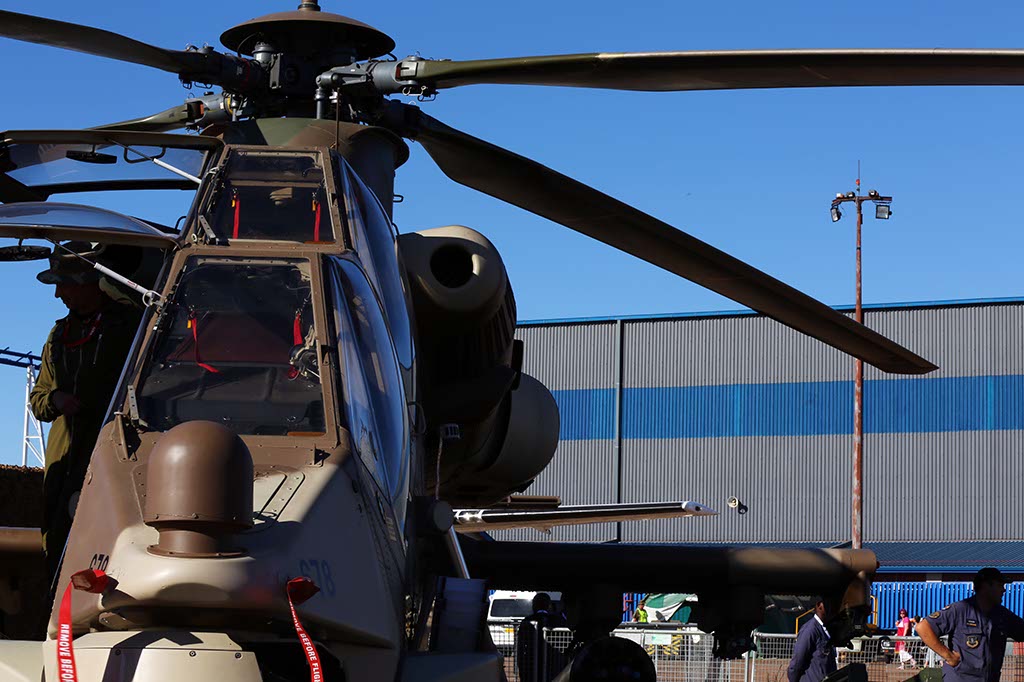 The Rooivalk (pictured) is the South African Air Force's attack helicopter. The country has around 11 in commission and they are based at the Bloemspruit Airforce Base. A Robinson R44 Raven II was flying from Bela Bela to Roedtan when it crashed.

Military commentators have called on the South African National Defence Force to deploy Rooivalk helicopters to the Democratic Republic of Congo to aid the UN offensive against M23 rebels.

The Rooivalk is an impressive war machine, but its history is inextricably tied to South Africa’s dark past.

Nobody who saw the Casspirs rolling across the dystopian wastelands of Johannesburg in the science fiction hit District 9 will be surprised to learn that the South African arms industry is still capable of producing formidable weapons of destruction.

The armoured trucks were designed to withstand landmine blasts, but entered the public consciousness as a tool for terrorising the country’s increasingly restive townships.

Isolated by sanctions, and faced with increasing internal resistance and external threats, the South African government was forced to produce its own armaments, frequently modifications of the international arms the country was no longer legally permitted to acquire.

The establishment of Armscor in the late 1960s was aimed at getting around the arms embargo by manufacturing weapons locally.

Armscor’s – and, later, Denel’s - greatest hits include the G5 howitzer, a portable artillery device used effectively in the Border War, and by such notable operators as Saddam Hussein, The R4 assault rifle, commissioned by the then SADF and modified from the Israeli Galil, which is still used by the country’s armed forces, and the compact R5 which remains a common sight, popular with police, private security companies and cash heist gangs.

The Border War can be considered a proxy battle of the Cold War, with South Africa and its allies pitted against Soviet-armed Cuban and Angolan forces.  Direct Western aid to the apartheid regime would have been too politically fraught , but the United States is said to have provided covert military support to the cause, including supplying UNITA rebels with Stinger missiles.

The Atlas Cheetah fighter jet was a major component of the SADF’s rearmament in the face of Soviet MiG fighters and artillery.

The country’s aging aircraft were increasingly ineffective against superior airpower, and the costs of maintaining the fleets were escalating. However, sanctions precluded the acquisition of new fighters. A decision was taken to upgrade the air force’s Mirage fleet, following the example of the Israeli Kfir programme, which successfully modified the French jet for Israeli purposes. Variants of the Cheetah formed the core of the SAAF’s fleet until the acquisition of Swedish Gripen fighters for hundreds of millions of rands as part of the controversial post-apartheid arms deal.

This is the milieu in which the Rooivalk was conceived.

Although the Rooivalk is a relatively new addition to the SANDF – the first operational helicopter was only delivered in 2011 – the plan for a rugged attack helicopter dates back to the 1980s.

As with the Cheetah, the Rooivalk can ultimately be traced back to a French prototype. By the 1980s, the South African Air Force was heavily reliant on the SA 330 Puma helicopter, manufactured by French aerospace manufacturer Arospatiale. (The company has now been subsumed into EADS, notable for assisting South African officials to obtain luxury cars at the time of the arms deal tender process.) Constrained by sanctions and faced with the particular demands of bush warfare, military officials successfully developed a modified version of the Puma, the Atlas Oryx. The project was very successful and variants of the multipurpose Oryx still form the backbone of the SAAF helicopter fleet.

The Rooivalk project did not run quite so smoothly.

Far more ambitious than the Oryx development, the Rooivalk was supposed to be a world-beating attack helicopter that would give the SADF the edge over enemy positions. It is perhaps understandable that military chiefs opted for an agile, technologically sophisticated gunship equipped with armour-busting weaponry and long-range capabilities, especially when faced with Cuban-operated Soviet T55 tanks in the Angolan theatre. But there was a major flaw with the plan: by the time the Border War ended, none of these super choppers was actually in service.

The project was beset by delays and escalating costs. It was hoped something could be salvaged from the misadventure by selling Rooivalks to foreign militaries. It is, after all, a very good attack helicopter.

There was hope that Malaysia would opt for the South African craft instead of the US Apache. News reports dating from 1990s indicated that such a decision could be imminent, and Denel bosses remained desperately hopeful. When the Rooivalk was edged out of a Turkish tender, the dream of South Africa becoming a preeminent exporter of attack craft was no longer even faintly plausible.

Why did nobody want the Rooivalk? There may be solid tactical and engineering reasons to prefer competing attack helicopters, but the serpentine calculus of the international arms trade is never that simple.

The arms deal scandal has taught the South African public all about offsets, reciprocal deals and ‘sweeteners’. There is also the question of political influence. If the United States suggests you might be better off choosing the Apache, that might be an offer you can’t refuse

That left the SANDF as the Rooivalk’s sole customer. As the country is unlikely to wage a major war in the foreseeable future – it’s not likely that Rooivalks would have been useful in the invasion of Lesotho – the helicopter is most likely to see action in peacekeeping deployments across Africa.

Upon the SANDF’s taking charge of their new helicopters, then CEO of Denel Talib Sadik was quoted as saying: “This is a product that the entire South Africa can be proud of – locally designed, locally manufactured and now ready for deployment by our local Air Force."

We can all be proud of South African industry, but we should not forget that the Rooivalk, as with so many of the country’s advanced weapons, was conceived and designed in the service of brutal wars fought by an illegitimate regime. The less cynical may suggest that apartheid technology can now virtuously be reborn as tools of peacekeeping.

Maybe, but then we, the public, have a duty to ask what exactly our troops are doing in each conflict, who they are killing and for whom are they being killed?