Cannabis can relieve pain but carries risks: US report 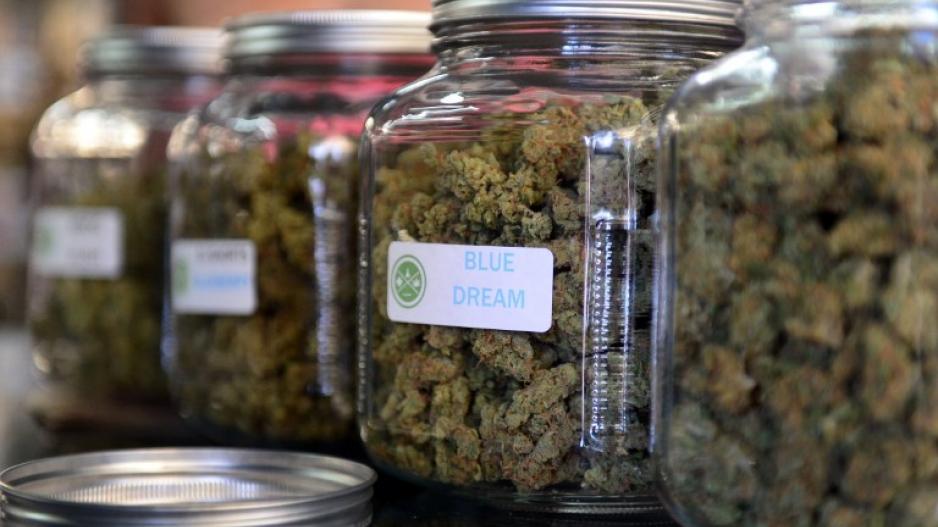 The highly-rated strain of medical marijuana, 'Blue Dream', is displayed among others in glass jars at an American cannabis farmer's market on July 4, 2014.

WASHINGTON — Marijuana and cannabis products can help to allleviate pain safely for some patients but many uncertainties remain about its health and safety risks, according to a major scientific review published onThursday.

A committee of the US National Academies of Sciences, Engineering, and Medicine looked at more than 10,000 scientific abstracts to reach its nearly 100 conclusions.

The report by a 17-member panel offers a "rigorous review of relevant scientific research published since 1999", said a statement from NASEM.

Cannabis, the scientific name for the plant whose dried buds and leaves are called marijuana, is the most popular illicit drug in the United States.

A recent nationwide survey showed that more than 22 million Americans above the age of 12 reported having used the drug in the previous 30 days.

Nine in 10 adult users said it was for recreational purposes, with just 10 percent saying it was solely for medical purposes.

"For years the landscape of marijuana use has been rapidly shifting as more and more states are legalising cannabis for the treatment of medical conditions and recreational use," said Marie McCormick, chair of the committee and a professor of maternal and child health at Harvard University.

"This growing acceptance, accessibility and use of cannabis and its derivatives have raised important public health concerns."

She said the report aimed to address the fact that the "lack of any aggregated knowledge of cannabis-related health effects has led to uncertainty about what, if any, the harms or benefits of its use are."

The report found that patients who used cannabis to treat chronic pain were "more likely to experience a significant reduction in pain symptoms".

Conclusive evidence was also found that these oral cannabinoids could prevent and treat nausea and vomiting in people with cancer undergoing chemotherapy.

"Smoking cannabis does not increase the risk for cancers often associated with tobacco use,- such as lung, head and neck cancers," added the report.

The committee "found limited evidence that cannabis use is associated with one sub-type of testicular cancer".

Risks of cannabis use, however, included the possibility of it triggering a heart attack, but more research was needed to understand "whether and how cannabis use is associated with heart attack, stroke, and diabetes".

Smoking cannabis could lead to a bronchitis and chronic cough, but "quitting cannabis smoking is likely to reduce these conditions" and it remained unclear if there was any link to respiratory diseases, including chronic obstructive pulmonary disease, asthma, or worsened lung function.

When it comes to mental health, the committee found that "cannabis use is likely to increase the risk of developing schizophrenia, other psychoses, and social anxiety disorders, and to a lesser extent depression".

Thoughts of suicide could increase among heavy cannabis users and it could make bipolar disorder symptoms worse. But in people with schizophrenia and other psychoses "a history of cannabis use may be linked to better performance on learning and memory tasks", it said.

The more people used cannabis -- and the younger they started, the more likely they were to develop what is known as "problem cannabis use". But the committee found limited evidence that cannabis use increased the rate of initiating other drug use.

Even if brain functions such as learning, memory, and attention are impaired after using cannabis, researchers found few signs of long-term damage in people who had stopped smoking it.

In pregnant women, some evidence has shown that smoking cannabis during pregnancy is linked to lower birth weight, but the relationship with other pregnancy and childhood outcomes is unclear.

Accidents among children, including ingesting cannabis, have risen sharply since the substance was legalised in some parts of the United States.

Not surprisingly. the report found "substantial evidence" that cannabis use was linked to impaired driving and vehicle crashes.

Advocates of medical marijuana said the report showed that cannabis can help people, and urged the federal government to legalise it.

Marijuana is currently a Schedule I substance under the Controlled Substances Act, which means it is determined to have has no medical value.

"This report is vindication for all the many researchers, patients and healthcare providers who have long understood the benefits of medical marijuana," said Michael Collins, deputy director of national affairs at the Drug Policy Alliance.

Paul Armentano, deputy director of NORML, a lobbying group that aims to legalise marijuana, pointed out that the evidence was not new.

"Yet for decades marijuana policy in this country has largely been driven by rhetoric and emotion, not science and evidence," he said.

"At a minimum, we know enough about cannabis, as well as the failures of cannabis prohibition, to regulate its consumption by adults, end its longstanding criminalisation, and to remove it from its Schedule I prohibitive under federal law."