Climate target too low and progress too slow: top scientist 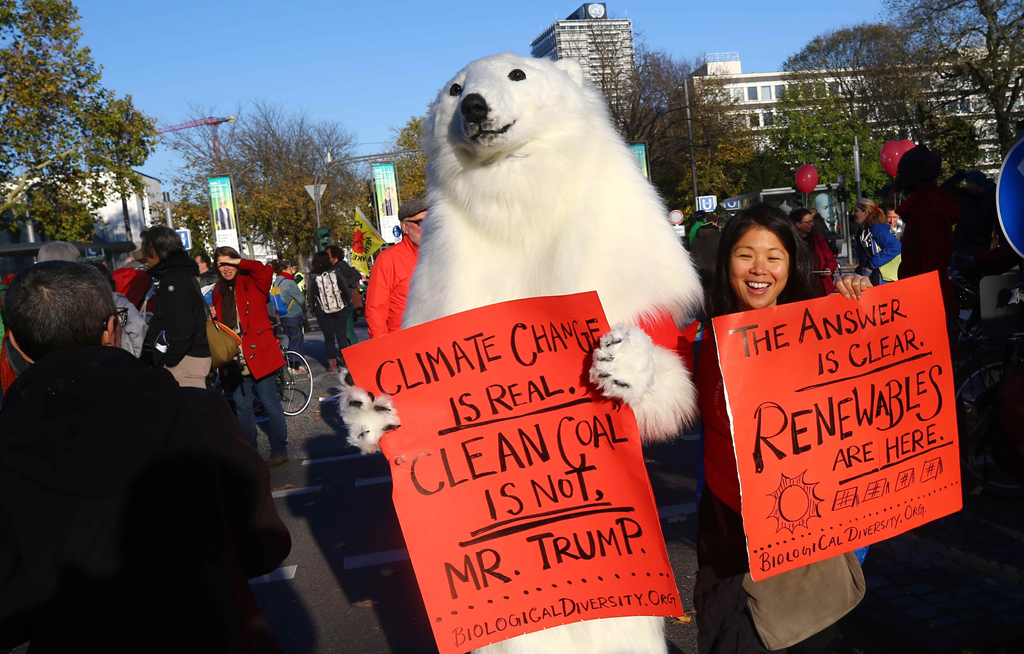 A protester dressed as a polar bear attends a demonstration under the banner "Protect the climate - stop coal" two days before the start of the COP 23 UN Climate Change Conference hosted by Fiji but held in Bonn, Germany November 4, 2017.

BONN - The world must sharply draw down greenhouse gas emissions and suck billions of tonnes of carbon dioxide from the air if today&39;s youth are to be spared climate cataclysm, a top scientist has warned.

"This reality is being ignored by governments around the world," said James Hansen, who famously announced to the US Congress 30 years ago that global warming was underway.

"To say that we are &39;moving in the right direction&39; just isn&39;t good enough anymore," he said in an interview.

Head of NASA&39;s Goddard Institute for Space Studies until 2013, Hansen and his 18-year-old granddaughter - who is suing the US government for contributing to the problem - delivered that message this week at UN climate negotiations in Bonn.

Thousands of diplomats at the 12-day, 196-nation talks are haggling over the fine print of a "user&39;s manual" for a treaty that will go into effect in 2020.

Inked in the French capital in 2015, the Paris Agreement calls for capping global warming at two degrees Celsius (3.6 degrees Fahrenheit).

With the planet out of kilter after only one degree of warming - enough to amplify deadly heatwaves, superstorms and droughts - the treaty also vows to explore the feasibility of holding the line at 1.5 C.

"That is a good impulse because if we go to 2 C, it is guaranteed that we will lose our shorelines and coastal cities," said Hansen.

"The only question is how fast."

Earth&39;s surface temperature, the amount of CO2 in the atmosphere, and sea levels have all changed in lock-step over hundreds of millions of years, he pointed out.

In 2016, the atmospheric concentration of carbon dioxide - the main greenhouse gas - tipped over 403 parts per million (ppm), 40 percent above the pre-industrial average and the highest level in at least 800,000 years, the UN&39;s weather agency reported this week.

Even under optimistic scenarios, that number is projected to rise for decades.

What&39;s the limit for a climate-safe world?

The UN&39;s science advisory body, the Intergovernmental Panel on Climate Change (IPCC), has said we can "likely" stay under the 2 C threshold if CO2 levels don&39;t exceed 450 ppm by 2100.

For Hansen, that&39;s a recipe for disaster.

Meltwater from the Greenland and Antarctic ice sheets could add metres to sea levels by 2100, he has calculated.

When writer and environmentalist Bill McKibben decided a decade ago to launch a campaign to fight global warming, he asked the world&39;s best-known climate scientist what he should call it.

By coincidence, Hansen was about to publish a major study that concluded the ceiling for CO2 levels should be 350 ppm, at most.

"Hansen does make a compelling case that many climate change impacts are occurring sooner and with greater magnitude than we expected," said Michael Mann, director of the Earth System Science Center at Pennsylvania State University.

"Jim&39;s past predictions have proven prescient and we do indeed ignore him at our peril."

"Hansen&39;s contributions to the basic science of climate change are fundamental to our current understanding - no one has contributed more," said Michael Oppenheimer, a professor of geosciences and international affairs at Princeton University.

Even if humanity succeeds in bending down the curve of greenhouse emissions far sooner than currently seems imaginable, it would not be fast enough to bring CO2 levels back to 350 ppm by century&39;s end, according to Hansen.

"You would have to extract 150 billion tonnes of carbon from the atmosphere," more than 10 times the amount we emit each year, he said.

The technology to do that does not currently exist.

At 76, Hansen is thinking a lot about and what kind of world young people will be inheriting.

So is his granddaughter, Sophie Kivlehan, a first-year university student in the United States.

Along with 20 of her peers, Kivlehan has sued the US federal government for what might best be called climate negligence.

"When the US Constitution says &39;We the People,&39; that means young people too," she said in an interview.

"We have constitutional rights, and those rights are being violated."

The case is currently wending its way through the federal court system, and could one day wind up before the Supreme Court, one of the lawyers representing the plaintiffs told AFP.

Government attempts to have the case thrown out have failed.

Despite his grim predictions, Hansen has not thrown his hands up in despair. He continues, for example, to campaign for a direct tax on fossil fuels as the only realistic way to achieve the necessary cuts.