Drone aircraft carrier landing 'a glimpse of the future' 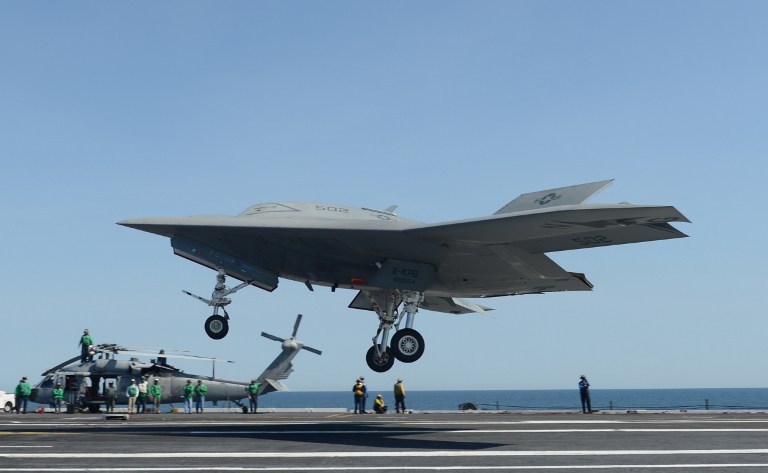 This photo released by the US Navy shows an X-47B unmanned combat air system (UCAS) demonstrator preparing to execute a touch and go landing on May 17, 2013 on the flight deck of the aircraft carrier USS George H.W. Bush (CVN 77)in the Atlantic Ocean.

WASHINGTON - An experimental drone aircraft landed on an aircraft carrier using autonomous navigation for the first time, the US Navy said Thursday.
The X-47B test aircraft was guided by its navigation computer to land on the USS George HW Bush in the Atlantic on Wednesday off the Virginia coast.
It was the first autonomous landing on a carrier by a drone, although a human pilot was on hand to take over by remote control if necessary.
The drone successfully caught the landing wire, coming to a stop within 100 metres from a speed of 260 kilometres per hour, in a manoeuvre routinely performed by navy pilots.
The Navy&39;s civilian chief executive, Secretary Ray Mabus, called the landing "a glimpse of the future" after witnessing the successful test.
"The operational unmanned aircraft soon to be developed have the opportunity to radically change the way presence and combat power are delivered from our aircraft carriers," he said in a Pentagon statement.
The tailless, jet-powered X-47B is approximately the same size as a fighter jet, but has twice the range of the F-35C, the Lockheed Martin-made jet widely used by the US Navy.
Drones currently in operation are steered remotely by pilots using joysticks to control the aircraft&39;s flaps, thrust and other commands. The software on the X-47B still needs human input for the destination and the route, but calculates the rest for itself.
The drone in Wednesday&39;s test made a 35-minute flight south from Patuxent River Naval Air Station to the carrier.
Rear Admiral Mat Winter, who oversees drone programmes headquartered at the base, called it a "milestone in naval aviation."